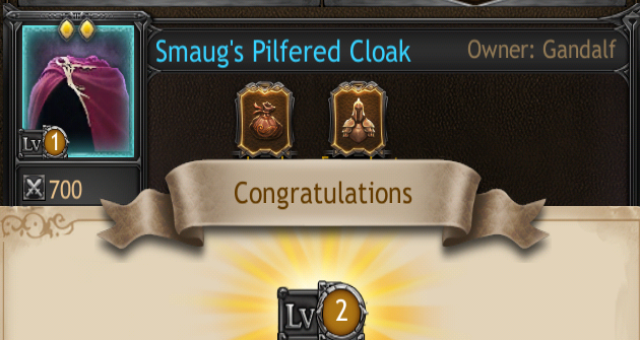 There’s been a huge change with the recent update and upgrading gear in Hobbit: Kingdoms of Middle-Earth is now possible and offers many benefits. Acquiring really good gear hasn’t been easy with the best gear for heroes over level 115 from Smaug’s Campaign or you could craft rudimentary gear using Armor Scraps as laid out in my crafting gear guide. Now you can improve the gear you already own by enhancing it and upgrading it. And the good news is it’s a feature you can actively partake in without purchasing the items needed for it (but of course you can also purchase those items) and Kabam was kind enough to give a free amulet, Shine of the Eldar, to get you started. Now you can only upgrade gear that has additional attributes but if you’ve been receiving an excessive amount of Armor Scraps and have a ton of various Miner’s items you’ll be glad to know that none of those items will go to waste. You can use those items to level up your upgradeable gear and you’ll need plenty of them. To upgrade your gear you can either select your Forge in any city and then select the Equipment tab or you can just select Gear in the quick bar at the bottom. You’ll see all the gear you own and if that item is already equipped to a character. So here are the two aspects of upgrading gear: 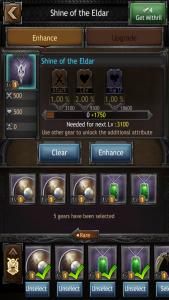 To enhance gear you select one of your items that has additional attributes and then select the Enhance tab. If all the additional attributes haven’t been unlocked then the ‘Select’ button is highlighted and when you click on it you’re able to select the gear you want to sacrifice. You can select up to 5 at a time and you’re given many opportunities to remove an item so you don’t have to worry about sacrificing one by accident, and only the items that aren’t assigned to a hero are shown. And you can also lock items on your Equipment tab so you can’t even select them just to be on the safe side. At the top you’re shown the additional attributes you can unlock and how much XP is required to unlock those attributes. All the Miner’s gear gives 350 XP except the sword, which gives 475, so if you’re planning on creating them in bulk just to use to upgrade another piece of gear it doesn’t matter which one you craft. Other gear gives varying XP with some, such as Smaug’s Pilfered Cloak giving over 3000 XP so you might want to also acquire additional gear through the campaign or attacking camps as well. So for example, the Shine of the Eldar has an increased Attack, Life and Decrease Enemy Life attributes that can be unlocked and if you unlock all of them you’ll receive an additional +35 Might for your army. 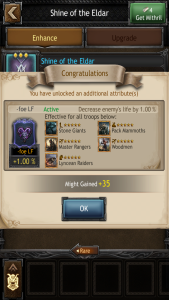 To upgrade your gear you’ll need to collect two additional items, Crimson Crystals and Valto Runes, which are used to upgrade items and increase the success rate of an upgrade, respectively. You can hunt for these items the same way you would for Forge Runes or Armor Scraps, and I’ve found the final boss on the Mirkwood campaign to be the best map to acquire these items. Upgrade doesn’t add any new attributes but increases the ratings for the attributes you’ve already unlocked. Crimson Crystals are automatically used when upgrading but your success rate is very low without using a Valto Rune and the more you upgrade your item the less likely you’ll have success the next time if you’re just using a common Valto Rune, and you can’t apply more than one at a time. If an upgrade attempt fails you’ll be given additional might as compensation. But with the increase in stats it can definitely make the difference between winning a battle and losing.

I’ve found the grind for items to be less daunting and I believe the rate drop has increased for ALL items including Forge Runes and  Armor Scraps as well. So even if you don’t have gear to upgrade yet you can still appreciate the increased Forge Runes drop.