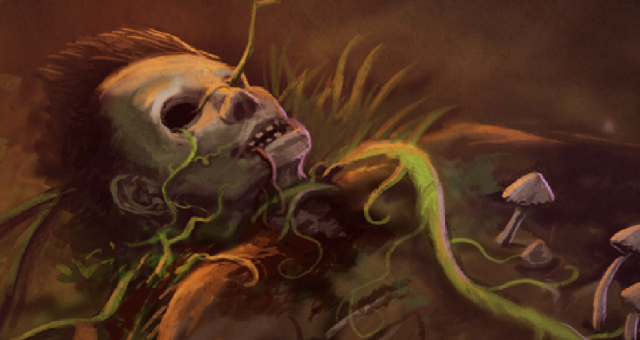 Unavowed is an indie adventure game developed by Wadjet Eye games. It’s set in New York City and opens up to a chaotic scene on a rooftop. You’re captured and are interrogated by two individuals but you don’t know what’s going on. Slowly your memories start coming back to you. You remember how you were in the midst of  a bizarre situation at work only to be possessed by an unknown spirit.

Your two interrogators, Eli and Mandana, are able to free you from this demonic possession but one year has passed since you were first possessed. To make matters worse, you’re on the most wanted list for a number of murders you committed while possessed. This corners you so that there’s no way you can go back to your old life. However, they offer you a solution: join the ranks of the Unavowed. It’s an ancient organization with chapters across the globe. The New York chapter is led by a Jinn named Kalash. Will you be able to uncover the demon’s nefarious plot in time to stop it and save New York?

At this point I’ve come to expect many things from a Wadjet Eye game. smooth gameplay and uniquely endearing graphics are two of the things on the list. It’s as much a trademark as any. If you’ve played a Wadjet Eye game before you’ll feel completely at home here even with the slight variation. The cursor automatically changes between a look icon and an action icon. So it’s easy to scan the beautiful scenery and get immediate information wherever you hover the cursor. This also means that it’s easier to identify items you can interact with or manipulate.

Your first encounter with a demon spawn gives a taste of how to manipulate items to find a solution. But it’s not until your first mission as a member of the Unavowed when you get a glimpse of the teammate game play mechanic. For your first mission Eli and Mandana join you but as you recruit more characters to the Unavowed’s ranks you can choose any 2 characters to join you on a mission. Their icons appear in your inventory just like any other item and you can use their abilities to solve puzzles.

This simplified interface doesn’t oversimplify gameplay mechanics because choice is the main gameplay element. As soon as the story starts, you’re in the middle of a confrontation with Eli and Mandana. Your answers to their questions not only determine whether your character is a male or female but the next sequence of events. You can choose to be an actor, a cop or a bartender and you actually play a completely different opening based on your choice. This also determines your history with various teammates and characters you meet throughout the game.

However, choice isn’t used as a gimmick to give you the sense that you determine the outcome. Your choices directly determine the course of events and the outcome. Choices range from which characters you select for each mission to life and death decisions. It’s remarkable how you can choose any characters you want and still be able to advance the story by solving puzzles in completely different ways. There were numerous times I sat for a few minutes to think about the ramifications of a decision before me. This made me feel more invested in the story and the characters.

The puzzles throughout aren’t the most complicated puzzles in terms of inventory manipulation but have a logical flow to them. This means at times you’ll feel stumped in different ways depending on which characters you select. For example, Eli has the ability to fire read notes even if they’ve been burned. This allows you to retrieve valuable messages to help you solve a puzzle. But Logan is able to speak to the dead so if there’s a ghost with answers he’s the only one who can talk to it. This makes the game feel challenging without feeling frustrating. This distinguishes the characters and the great writing gives them depth and charm. And I’ve tried levels with different characters and it was always entertaining.

Does the story hold up in terms of the quality of a Wadjet Eye game? I’m glad to say it definitely does. Initially you’re retracing the steps of the demon who possessed you in order to uncover his endgame. The mystery is enticing and leads you to various locations around New York City. It’s the Unavowed’s mission to address supernatural events threatening the city. (The world building is incredible and I found myself wanting more games with this team or other Unavowed chapters around the world.) Even though the scale of the scheme is huge, the story does not lose sight of the personal and the impact these events have on people just living their daily lives.

Of course, I won’t give away the story, however I will say that there are enough twists to keep it engrossing. It was truly surprising. I actually cared about what was happening to the characters and around the city. I even wished I could revisit locations just to learn more by using other characters but unfortunately the game doesn’t allow you to do that unless you use restore points. The experience varies greatly depending on the choices you made so it pays off to try different paths. So whichever ending you get it’ll be memorable.

Unavowed is an excellent addition to the long line of highly entertaining Wadjet Eye games. The fascinating world building filled with unique characters keeps the story fresh and exciting from beginning to end. Even though the inventory system is sparsely used to solve puzzles, the puzzles are more dynamic so the gameplay is engrossing. The various paths and endings mean there’s high replayability value. However I would love to see more games set in the interesting world of the Unavowed