Fallen World #1 is the start of a new series chronicling the state of the Earth in the year 4002 A.D. It continues the story of Rai, the cyborg samurai, one year after he defeated Father and New Japan fell to Earth. No one was able to get a full accounting of the aftermath of the various sectors of New Japan falling to Earth or exactly where they landed. However, it wasn’t difficult to understand that the aftermath bought suffering for a number of New Japan residents. If they were able to survive the crash, they still had to fend for themselves without Father’s assistance for the first time in their lives.

Earth’s heroes aren’t faring that much better. Rai is currently the leader of the safest sector but in addition to an unhappy populace, he’s plagued by doubts about his actions on New Japan. Gilad protects the current Geomancer but she struggles due to the fact she can feel Earth suffering from the crash of New Japan. And Bloodshot is constantly overwhelmed with voices crying for help so he searches for different sectors throughout the Earth unable to find his own peace. This allows a creature to capture Bloodshot, giving rise to a new threat on the planet. Can Earth’s heroes rise above the fallen remains of New Japan? 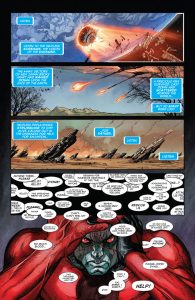 Some time has passed since the last issue of Rai was released with its stunning conclusion, and Fallen World #1 doesn’t miss a beat. There are so many things to love about Rai and the world of 4002 A.D. One of those things is the world-building. This issue immediately puts the characters’ actions in the context of recent events on New Japan. It also puts the current overall state of the Earth front and center. This clear picture makes it easy to feel invested without oversimplifying the significance of the events taking place. Nothing is black and white.

Rai’s new position as leader of both humans and positrons in his sector is intriguing. Not only does his sector face threats from outside but internal turmoil as well. Unlike Father who had absolute authority and trust, Rai has to contend with a restless population and his own doubts. He’s vowed to never use force again, and this directly impacts the views of the residents. The political dynamics are interesting because they give a clear view of the mentality of the people and their hardships since the fall of New Japan. 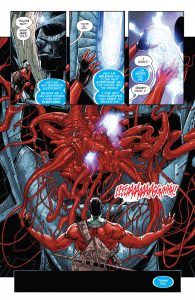 Even though Rai is confined to one sector the majority of this issue, Bloodshot and Gilad are not. Bloodshot visits different sectors early in this issue, which gives a sense of how fallen sectors are faring. And Gilad’s journey through the Earth with the Geomancer opens the door to understanding the shape the world is in overall. Bloodshot and Gilad’s story threads are interesting this issue but have even more potential going forward. Every sector of New Japan was different so the possibilities of what can be found are plenty. And this issue makes it all feel exciting.

Fallen World #1 is a great re-introduction to the world of Rai and 4000 A.D.. This issue picks up from the perfect spot with the heroes of the revolution on New Japan facing new challenges on Earth. I really appreciate Rai’s new situation because it allows an examination of his character from a different angle. It also gives a face and voice to the residents of his sector. I love Bloodshot but I’m concerned his role will only be to serve as a host for a new enemy in this story arc. However, Gilad and the Geomancer add another entertaining element to the start of this series. I can’t wait for the next issues.