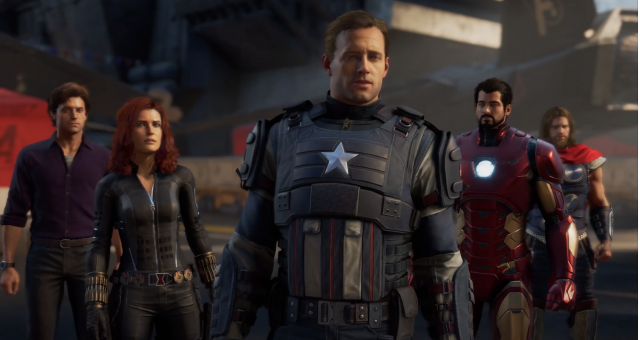 Imagine the Avengers, Earth’s Mightiest Heroes, at the pinnacle of their success expanding their operations to the West Coast. At the celebration in San Francisco they pull out all the stops in showing off their latest gadgets, including the tech powering the helicarrier. Something goes wrong during the celebration when an unknown army of highly-advanced soldiers led by Taskmaster attacks the city. The Avengers respond to this attack but somehow Taskmaster is ahead of them every step of the way. Tragedy leads to disaster as the entire city of San Francisco is nearly wiped out and Captain America is on the helicarrier when it explodes. Captain America is now presumed dead and superheroes are deemed too dangerous and outlawed resulting in the disbandment of the Avengers. This is the premise of the upcoming Avengers game being developed by Crystal Dynamics.

Flash forward five years into the future where an organization called Advanced Idea Mechanics (A.I.M.) is responsible for the safekeeping of the world. Not only do they protect the world from threats but they also target and hunt anyone who is deemed to have developed  superpowers as a result of catastrophic explosion in San Francisco five years ago. Add to that the growing rumors that the Avengers were set up and the world is teetering on the brink of revolution. Enter Kamala Khan aka Ms. Marvel, the surprise addition to this original story recently revealed at New York Comic-Con. And she’s also the catalyst to the Avengers finding their way back. Luckily I got a chance to preview 30 minutes of gameplay at NYCC, and I was pleasantly surprised.

The gameplay starts with the attack in San Francisco. I initially took control of Thor, and I was impressed almost immediately with the fluid controls.  Of course there’s a light and a heavy attack, and different combinations lead to different moves. But where the game play excelled was making me feel as powerful as Thor with the unique ability to wield Mjolnir. Yes, you can throw Mjolnir at will but it doesn’t automatically come back to you unless you call it back. I loved this aspect because it gave so much freedom to create my own combos and fight each battle differently. During one sequence, I threw Mjolnir in one direction pinning an enemy against a truck while fighting enemies coming at me from a different direction barehanded. I was able to turned around just in time to call Mjolnir back, striking shielded enemies from behind before unleashing a lightning attack.

During the demo I was also able to play as Iron Man, Hulk, Captain America and Black Widow. Even though this was just an introduction to the gameplay mechanics, each character felt differently. Nothing is worse than being able to play as a character but being unable to use their full arsenal of abilities due to bad mechanics. Want to fly as Iron Man in the middle of a battle? Sure, why not. Want to smash things as Hulk? Go ahead. Throw Cap’s shield around as much as you want. Use stealth against Taskmaster as Black Widow to gain an advantage. The levels were designed specifically for the character I had to use, and it was a blast. Each character has unique abilities and special moves to unleash. The moves worked seamlessly, and thankfully QTEs were kept to a minimum. 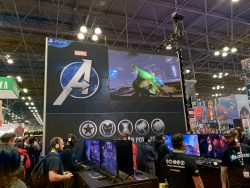 Will the Avengers Save the World?

Granted, a well-polished demo on display with 20-30 minutes of fun gameplay doesn’t encompass hours of gameplay and story. However, the story looks bold and riveting. Plus there were previews of gameplay where you can select missions throughout the world and even form co-op teams with friends to complete those missions. Unfortunately I did not get to play any of those nor test any character upgrade capabilities. Knowing each character eventually gets their own Stark tech to enhance their abilities gives me hope there are some customization features.

Spider-Man for PS4 is one of my favorite games for many reasons but mainly because you truly feel like Spider-Man in all respects. Avengers looks to be as ambitious in the sense of not just letting you use your favorite Avengers in different situations but making you feel that you are the Avengers in a world controlled by dark forces. If that’s the case then sign me up. Avengers Assemble!

Avengers is set to be released May 15 2020 on PC, Xbox One and PS4. Pre-order bonuses include early access to the beta with PS4 players gaining access a week before anyone else.