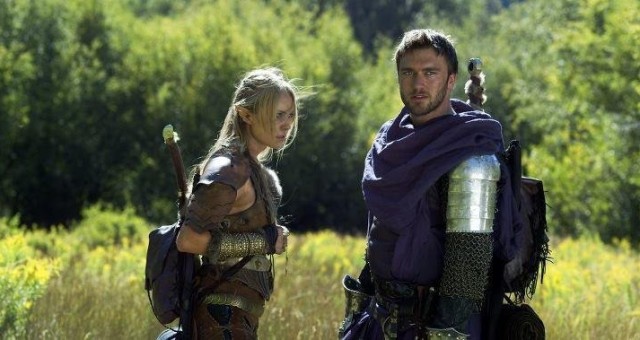 Whether it’s playing Elder Scrolls Online, re-watching the Lord of the Rings movies or discussing the latest Game of Thrones episode, I always find a way to get my high fantasy fix, so interviewing John Lyde, director of the Curse of the Dragon Slayer was no different. The Curse of the Dragon Slayer is an independent film set in a similar world where 3 heroes, a human, an elf and an orc must team up to fight against the Shadow Cabal, a cult seeking to unleash the God of the Undead. But it’s not an easy alliance as the human, Keltus is a knight of the Order, a human organization created to destroy evil while upholding certain principles above all else, Nemyt is an elf who is used to working on her own and is filled with rage since she received the mark of the curse, and Kullimon is an orc who was once leader of his pack of orcs until he was betrayed and left for dead. It was an enjoyable movie and I had to pick John Lyde’s brain for more insight into the movie and what went on behind the scenes.

Me: Curse of the Dragon Slayer starts off action-packed with one sequence after another so I have to know if the actors performed their own stunts and if so, did they have to undergo additional training for that?

John: All the actors did perform their own stunts. And for example, Danielle (Nemyt), I met her when she was real young and she was about 11. And whenever I asked her to do something she always picked it up super fast. And as she got older I said you should start doing fight training. So she actually (went) with my buddy who teaches MMA, and then my wife would go, a couple of other friends and then Dani would go as well, and they would all train and put together fight scenes. So training beforehand but then knowing we wanted to make action packed movies. Plus it’s always more fun to have the actors do their own stunts, if they’re willing.

Me: The 3 heroes make up an interesting combination with a human, elf, and an orc. What went into the decision to make an orc one of the heroes when they’re usually cast as villains, and what made him so different from other orcs?

John: The writers, Jason (Faller) and Kynan (Griffin) wanted an orc hero. Originally he was supposed to have a smaller role, kind of a comic sidekick but as things started to play out we realized how much fun of a character he was and how we could make him unique and different. Still he’s gruff and willing to kill anyone and anything but he’s the character with the most honor, and we thought that would be unique and fun for an orc character. And he’s the one that no matter what will do the honorable thing.

Me: A character stated to Keltus early in the movie, “A hero is known by his deeds but judged by his heart, who has your heart” and that plays a key role in the events that occur later. What was it about his life that made him so devoted to the Prophetess and the Order?

John: I think in general most people are looking for something to devote themselves to (in order) to be passionate about and that’s what he picked where he got to the point where he didn’t even question the methods. And I think he went past the point where he was so devoted he no longer questioned what he was doing so long as it came from (the Order). And that probably stemmed from him learning from a young age that once you’re devoted to something you stick to it but at the same time because he was so dedicated it actually hurt him when he was blindsided and unable to see what he was doing until he was hurting.

Me: That makes sense. I know at times people throw themselves deeply into something they feel has a greater meaning in life.

Me: I know it’s almost cliché to have prequels for movies but have you considered a movie that elaborates on the history of the characters or the world the movie is set in?

John: We wanted to explore it further. There was a script written for a sequel but the budget was way too high. So if this one does well we definitely want to explore this world more because I think it has so many possibilities. There are multiple prophetess, multiple goddesses and I think the characters are so much fun that we can definitely find more adventures for them to go on.

Me: Nemyt was a very interesting character, can we expect to see her in future movies?

John: We have a script for her with the next one and we have the 3 of them teaming up again to go on an adventure. That opening scene with her was the first scene we shot (in this movie). Before there was a script even written we shot the opening scene, and then based on her performance there and anything that happened, that was the catalyst for the writers to go out and make the script.

Me: There is some very beautiful scenery in the movie so where was it filmed?

John: It was shot entirely in Utah all over the state. In southern Utah is where we shot the opening with the rocks and the unique desert look. And then everything else was shot in central and northern Utah at the salt flats. That’s where the flashbacks with the Prophetess are. That’s where they shot the Pirates of the Caribbean 3. And so everything was within 4 hours driving distance to all of these different locations in Utah.

Me: Did it have to be done at a specific time of the year?

John: The opening scene was shot in January because we wanted to see what happened with it and from there we wrote the script. And then shot the entire film in August.

Me: It seemed like there was a change in the visuals and it went from being dark at one point to very vibrant at a later point in the journey. Can you elaborate on that?

John: Part of it was the color correction. So what we did with the color correction is once the 3 heroes are together, at first their journey is all (dark because) we had it at night. We had it in a dark misty forest so we tried to keep the tone blue and darker green, very murky. And then as the journey continues on and they get to know each other more and they get to trust each other more and they get to trust one another, I had things become more bright and vibrant (with) some yellow and orange in the sky. And then at the end things go darker and they fight. With the bad guys at the end we had to go dark green, and grey and blue again.

Me: There’s another movie you’re currently working on called One Shot, and since I’m a sci-fi fan I’m curious about this movie. Can you give me more information about this movie and when it’ll be released?

John: Since Curse of the Dragon Slayer I shot two more movies and One Shot was one of them. That one was with almost the same crew and a few of the same cast members. That one is about a sniper on another planet. And so it takes place slightly in the future where this alien race has pummeled our planet and in return we have soldiers on their planet. And the film follows the sniper who was stranded and trying to survive on the planet. So that one was quite fun to do shortly thereafter. And recently we did one with Kevin Sorbo called Survivor. And in that one the lead role is played by Danielle Chuchran, the female elf in Curse of the Dragon Slayer. That’s more of a sci-fi film on a planet in the future where a station crashes and her character is trying to find the survivors while battling these creatures. That one should be available within the next couple of months, the same as One Shot.

John: Um, I’m not sure because the first one we did, Katniss and Rue, we found out they were doing the Hunger Games films so the first one was actually an audition piece for Danielle Chuchran. A friend of mine had a contact at Lionsgate. So I just shot that video in one day and I wanted her to have a chance to speak with the casting director. My friend, I asked him to show it to people at Lionsgate but he lost the contact. So I put it online and what happened was it became an online hit with all the Hunger Games fans since the (movies) weren’t out yet, and from that the casting director saw it and ended up having Danielle go out and meet with Gary Ross for Katniss.

Me: You said that you started working with her since she was 11 years old and I notice that she’s in a few of your movies. What is it that you think she brings to her characters that make you cast her in a lot of your films.

John: She’s so easy to get along with and she’s so talented acting wise and being able to cross over into the physical world. And she has high morals and strong values, which I like. She’s like a younger sister so she’s great that she’s pursuing acting and she’s super talented. And the fact she’s always prepared, always has her lines down, always puts her heart and soul in it, and the fact she can do her own fight scene as well.

Me: Yeah I can see how that makes it a lot easier and they’re very good fight scenes.

John: Remember the training (I mentioned), she dislocated my jaw once. She did a move, hit my jaw and popped it out. (laughs)

Me: What other future projects do you have in the works now?

John: You can look up a trailer called Crimson Skies, Under Mainstay Productions on Youtube. We’re doing all the visual effects first and that one fantasy wise I think will be a lot of fun. Basically on this island, a volcano goes off and a bunch of dragons come out of the volcano and the navy has to fight off these dragons over the Pacific. So that one we film in Utah in June but we’re doing all the visual effects for it first. And we’re also doing one in May called the Christmas Dragon, which is another fantasy film. But it’s in 16th century Europe where a bunch of orphans try to figure out why Father Christmas stopped coming so they end up running away from the monastery to look for Father Christmas and in the process they save this dragon and in turn it helps save Christmas. It will be released this Christmas. And the Crimson Skies won’t be released until 2015.