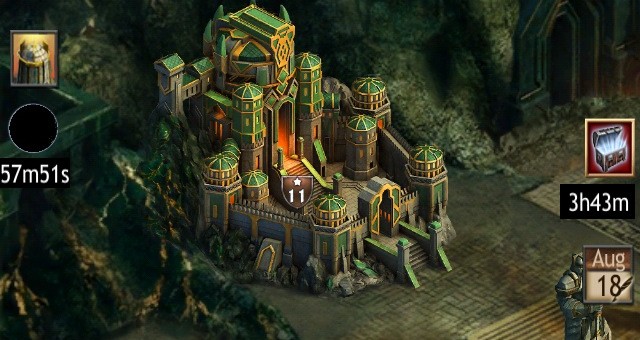 Ever since upgrading gear was possible there have been a slew of new gear that you can win and it’s been fun attempting to acquire all the new gear and see what benefits they provide. And I was recently asked about a comprehensive guide to the Hobbit: Kingdoms of Middle Earth gear. Gear is of course used to provide buffs to heroes, and equipping the right gear for the right situation can make the difference between a victory and a loss. Before I get to that it’s necessary to mention the recent update that directly impacts heroes, and a recent event that gave the opportunity to win complete gear sets in addition to great prizes. Here’s the list of changes for the 10.3 update:

Being able to add tactical troops as separate from normal troop limit is a huge change, and this comes with a visual update on the troop select screen as there’s a limit for normal troops but an additional bar segment that can only be filled with tactical troops. And a new category as been added in the Sage’s Tower on the Relics tab called Hero. This keeps track of how many Legendary Pages you’ve acquired to upgrade your heroes to their new versions. I haven’t acquired any Legendary Pages yet so I’ll have to post an update once that becomes available to me. 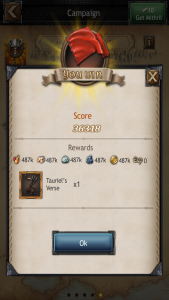 There was a limited-day campaign available as a recent event and this coincided with Tauriel’s Circle of Fate being available, and this was essential. The campaign was for Smaug’s Tooth Amulet, and it was extremely tough in the last 2 maps as the might of the enemies increased drastically with over 7 enemies on the last map alone with the last enemy capping at over 5 million might! Tauriel’s Circle of Fate has been great with giving troops and various other rewards including mithril but I still haven’t been able to get all 5 keys during one of its runs for the jackpot. However, I wanted to actually win troops so I could complete this campaign within the number of days, and I’m glad I did because the reward for one of the locations was either Tauriel’s Verse or Beorn’s Call, and I won Tauriel’s Verse finally for my 4th city. The special campaign is over now but this is just a reminder to participate in special events whenever possible because they’re still the best way to earn some of the most coveted prizes in a short amount of time.

Now, I’ve written guides on how to construct and how to upgrade gear, and so this one will get in-depth with the actual boosts the different equipment provides. Again, gear can either be a sword, shield, cloak, amulet or ring. Currently I do not own every piece of gear available so the table will be updated as more becomes available to me but it will be enough to at the very least give a general understanding of the benefits of gear. So here are all the main buffs and debuffs related to gear:

All of the changes to these stats from buffs and debuffs are by percentages, and different gear affect different troop types in unique ways. Also when legendary gear is equipped to a specific hero, additional buffs and debuffs are activated. Calculating the percentage increase for a particular buff is the stat number divided by 100 for one piece of gear, and when multiple pieces of gear affect the same stat the percentages are just added together. For example, a sword that has 600 Life increases life for all troops by 6%, and if you add a cloak that has 100 Life, the total increase is 7% (6%+1%).  Of course you don’t have to calculate this yourself since you can equip and unequip gear as much as you like to just see the results, and the below screen can be found by selecting your Great Hall then the Heroes tab, select a hero and then Details. 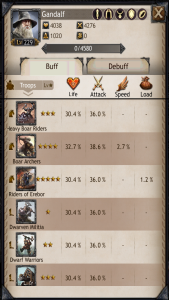 You can create Miner’s Gear (Amulet, Shield, Ring or Cloak) and Trader’s Gear (Shield, Amulet, Shield, Ring or Cloak), and the latter occasionally has additional attributes that can be unlocked by enhancing. So one Trader’s Weapon might have an additional attribute that increases attack while another has one that increases speed. Both types of gear can be equipped to heroes on any level while some gear has a minimum required level before it can be equipped. It’s good to mix and match based on your style of play so  you get the best results. Without further ado, here’s a list of gear with Speed, Load,  Foe LF, and Foe ATK as percentages, and numbers in gold representing buff from enhancement or an enhancement can increase that number:

Again, this list will be updated as I acquire more gear. Do you have additional gear that you don’t see on the list? Let me know.