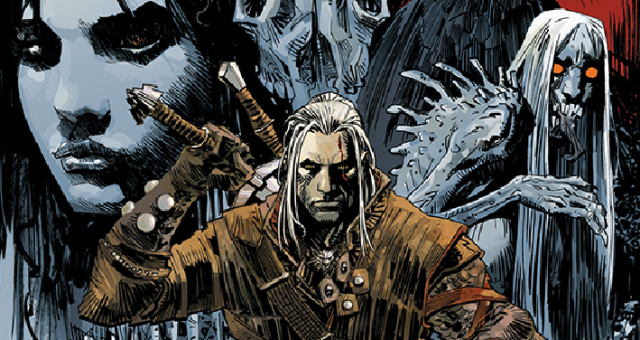 It’s here!! Excuse me, I mean I finally got my hands on the Witcher #1 preview and I’ve been looking forward to this since it was announced at NYCC. I’m a huge fan of the video game series, and I finished the second one multiple times to explore all the possible endings, and now I’m just starting the original books the video games are based on. So despite my partial disclaimer regarding my enthusiasm for this series, the story in this 5-part miniseries stands alone as it tells the tale of Geralt meeting a widowed man on the edge of the Black Forest during his journey. However the man’s wife haunts a mansion called the House of Glass and it’s up to Geralt, the monster hunter, to put an end to that place of horrors.

Even though there are very mature RPGs available now I always think of the Witcher series as adult RPGs because of its tone and handling of its subject matter, which I appreciate. It appears that there won’t be a drastic break from that as the writing of Paul Tobin along with the artwork of Joe Querio seems to be aiming for some of the darker tones in the Witcher lore. The first issue is set to be released March 19th.