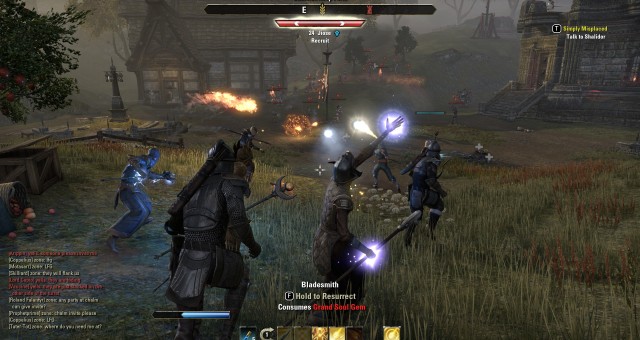 It’s truly one of the aspects of the game that has to be experienced so it’ll help to have the PvP basics in Elder Scrolls Online down pat or at the very least understand what it has to offer before deciding how much you’ll participate in it. You can’t participate in PvP until you reach level 10 and all PvP takes place in Cyrodiil, a separate region in the game. There are a few ways to get to Cyrodiil and that’s through the menu, the extended map and wayshrines, but the fastest way is to press ‘L’ (default key) to bring up the PvP Alliance War menu. You’re given a list of campaigns, which are just different Cyrodiil instances, on the Campaign tab and the population of each instance is divided between the 3 Factions: Daggerfall Covenant, Aldmeri Dominion and Ebonheart Pact. This information is important because you don’t want to pick an instance where your faction’s population is relatively low because it’ll be dominated easily. And even though you can play in any campaign, you’ll have to select a home campaign, which is the campaign where you’ll reap all the benefits I’ll address later. You’re not locked into a home campaign but if you do change it the effects won’t take place until 24 hours later. After you select your campaign you have to make sure to accept the notification when it’s ready or else you won’t be transported there.

The game does a good job touching on different aspects of the additional PvP game mechanics when you first arrive by leading you to different people in your immediate area but of course you can skip that if you’re not new to PvP and just using a new character. The overall goal is simple and it’s to capture and control the other factions’ Elder Scrolls, and dominate the incredibly massive map but the actual task is not so easy. There are a total of 18 castles, 6 for each faction, and each one has an Elder Scroll. In addition to these castles are resource buildings that provide additional bonuses and can be captured as well. However to get to the Elder Scroll you have to destroy the walls and defenses of the castle in addition to the numerous defenders and then retrieve it and bring it back to one of your castles. And in one of the more enjoyable aspects of the PvP, siege weapons are required to destroy the defense of the castles and so strategy definitely comes into play and this gives the feeling of a massive war taking place. There are 4 types of siege weapons:

These can be purchased from vendors at your factions bases for either gold on Alliance Points that you earn from completing different PvP objectives. In order to use a siege weapon you have to equip it in your quickslot and then deploy it on any flat surface, whether it’s outside a castle or on a castle wall. You aim using the mouse and you fire using the mouse buttons. The reload time depends on the siege weapon. All of them are used individually except the battering rams, which require a group of players. They all take damage but you can purchase repair kits for them (as well as for castle walls and doors) although it’s not easy to do so during battle so I would recommend repairing them far away from battle. You can stow them away so if you deploy them in a bad position you can always move them easily. You will not capture any castles without siege weapons and I love this aspect of the PvP game play mechanics because it adds a variety on the battlefield and makes the combat more engrossing. These same weapons can be used to defend a castle in addition to a few other items that can be purchased. Another item that is as useful as a siege weapon is a Forward Camp, which allows members of your faction to respawn there instead having to choose one of the closest castles, and it’s used the same way as a siege weapon through the quick slot. However it can’t be placed as close to an enemy’s castle. But with the map being massive, and I mean MASSIVE, this is key to a successful and coordinated attack on a castle or other location. You can also use soul gems to revive yourself in your current location but as a team the Forward Camp works best.

Capturing resource buildings such as lumber mills is different in the sense that you have to kill the defenders and raise your faction’s banner on the flagpole as opposed to destroying walls and doors. Now, there are many benefits for capturing Elder Scrolls, castles and resource buildings and they can truly help your character. And the bonuses increase based on the number of enemy castles you control. So every other enemy keep you own you get an increase in experience, alliance points, and gold gained from kills by an additional 2%. You also receive weapon critical bonuses, spell bonuses and if the current emperor belongs to your faction your max health increases by +5 for every character level. So the benefits to working with your faction can’t be exaggerated, and the current emperor is based on how has the highest score and whose faction owns the most Imperial keeps.

As I already mentioned, Cyrodiil is massive and so it’s definitely a good thing the map is populated with more than just castles and PvP battles. I tried to traverse the map on foot and after 30 minutes I still didn’t get from one end to the other so thankfully there’s a Transitus Network that allows you to quick travel between castles your faction owns. This is crucial to get back into a current battle but also so you can perform other quests. In addition to PvE quests you can come across while traveling through Cyrodiil, there are 4 types of missions you can perform for your faction to collect XP and Alliance Points: Bounty missions, Scouting missions, Battle missions and Warfront missions.

These quests are all acquired from the respective boards and generals in your faction and have to be turned in to collect the Alliance Points and XP. But while you’re traveling through Cyrodiil pay attention to the landscape as you’ll find some of the best resources to mine for crafting and you don’t want to miss out on that.

I’ve been thoroughly enjoying the PvP from just traveling and finding different locale to the intense battles that take place all over the map. There’s something irresistible about coordinating an attack on a castle on the fly and seeing 20+ players in your faction all heading to the same location using a variety of skills and abilities. And in Cyrodiil, victory belongs to the strongest and most united faction.