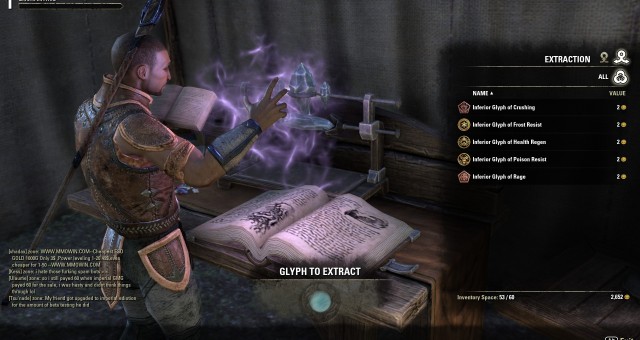 Whether it’s questing in Tamriel, helping members of your alliance or actively participating in PvP in Cyrodiil, you’ll need to know crafting basics in Elder Scrolls Online so you can have an advantage. You can start crafting on any level once you complete the tutorial and this has many benefits especially when you have more than one character. You don’t have to complete any quests or tutorials before you can craft nor are you limited by the number of crafting trades you can participate in. So you’re free to try all of them before choosing the ones you want to focus on, or you can strive to become a jack of all trades quite literally since items required for each don’t overlap. You just have to go to the respective crafting station and these are numerous throughout the cities of Tamriel. There is one initial limitation and that’s being able to craft only in the style of your race unless you acquire books called Racial Motifs and there’s one for every race/style. The items only vary in appearance and the value and characteristics are selected when you’re crafting the item. There are 6 crafts in Elder Scrolls Online:

Despite the items being completely different for each trade the gameplay mechanics for each are similar and that’s not a bad thing because the system is very enjoyable and surprisingly deep. Crafting in Elder Scrolls Online is structured around 5 different menus: Refine, Creation, Deconstruct/Extraction, Improvement and Research. Each craft uses at least one of these menus with Provisioning being the simplest craft, which only allows you to cook/create meals. Alchemy and Enchanting have less crafting menus with only the latter allowing you to deconstruct/extract items.

If you look at the picture above you’ll notice items are required for the style and the traits, if applicable. You can buy these items from the appropriate vendor next to the crafting station and they’re cheap and they’re identified so you don’t have to figure out which material goes with which of the 10 styles.

You can find raw materials for the various trades by mining them, killing animals or finding them stashed in crates, barrels, etc. You can also unlock skills by assigning your skill points to the crafting line to not only help you see these raw materials in the world from a distance but also have them delivered to you everyday. So if you’re serious about crafting it’s worth investing some skill points in the crafting tree because there’s one for each trade and this level of customization all but guarantees that if you devote your time and skill points to blacksmithing you’ll clearly have the advantage in that craft. The more you craft the more you raise your proficiency in it and by using the skill points earned to unlock crafting bonuses it becomes more than just mining raw materials making a choice to become an expert in that craft and having the freedom to do so. The crafting system is really impressive to me because it’s not only accessible but with the crafting skill line requiring about 24 skill points to completely unlock all the bonuses there’s a deep customization that adds an additional level of gameplay. And all the materials you deposit into a bank are available to ALL your characters so it’s possible to create another character, skip the tutorial and go right to crafting with all the materials you collected with your other characters being immediately available to you.

These are just the basics to crafting in Elder Scrolls Online. Be sure to check out my guides for each of the trades to see how to become proficient in the one of your choice.