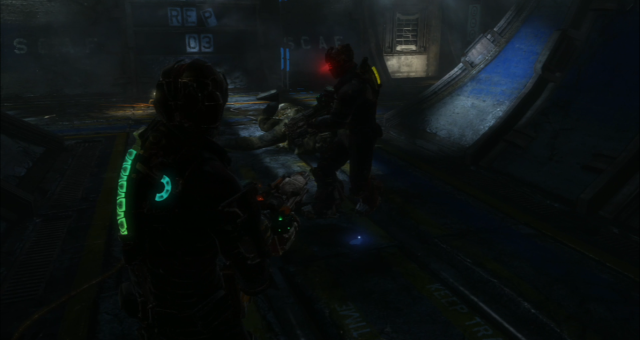 Dead Space 3 ‘Awakened’ DLC has been announced by Visceral games and continues the story of Isaac Clarke and John Carver after the events of Dead Space 3. (If you haven’t finished Dead Space 3 and want to avoid spoilers you should stop here.) Isaac and John were presumed dead by Ellie and left on the nearly destroyed planet Tau Volantis. Visceral promises that “the Dead Space saga enters its darkest chapter” as Isaac and Clarke try to escape what’s left of the planet and will have to make their way to the Terra Nova, a derelict ship that made an appearance in Dead Space 3 and if you completed the optional mission you’ll remember the traps set by the pilot Tucker Edwards. Well the Terra Nova isn’t safer in this DLC as the extreme Unitologists schemes aboard the ship are front and center as are Isaac and Clarke’s questionable psyches. After some criticism regarding Dead Space 3’s more action-oriented gameplay this one promises to amp up the horror factor as Isaac and Clarke struggle in the wake of their latest encounters with the Markers and necromorphs.

I’m very interested in this and will definitely be getting it. Some of the more interesting optional missions in Dead Space 3 were the ones were one co-op player was seeing hallucinations or visions while the other player experienced none of that or different visions. It was executed very well and with this DLC set to focus on more of the horror aspect of the series I expect it to be alot of fun. And with the ending in Dead Space 3 and the rumors that were denied by EA that Dead Space 4 has been cancelled I’m hoping this is very satisfying as a fan of the series. If you haven’t read my Dead Space 3 review check it out here. Awakened is set to be released on March 12th for $9.99