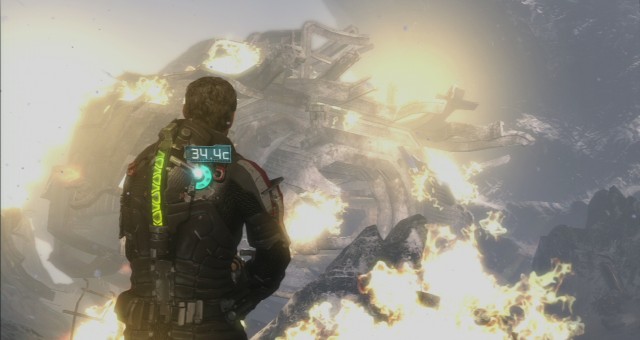 Dead Space 3 is an action/horror video game developed by Visceral Games and continues the story of Isaac Clarke 2 months after Dead Space 2 ended with Isaac and Ellie escaping after destroying the Marker. The game opens up 200 years ago on Tau Volantis, an icy planet being explored by Sovereign Colonies Armed Forces (SCAF) for something called the Codex and it’s important enough for them to want to battle necromorphs. After narrowly escaping an encounter with necromorphs, Ted Kaufman is able to retrieve the Codex for and report back to his commanding officer, the only other survivor on this planet. The Codex is for Dr. Earl Serrano, who of course didn’t venture to the planet, and the commanding officer realizing the mistake that was made verifies that no data was sent to Dr. Serrano yet and then proceeds to kill Ted Kaufman, deletes the data and then kills himself. Welcome to Tau Volantis where things go horribly wrong and can’t be blamed on Isaac Clarke. It’s up to you as Isaac Clarke to confront the horrors of the Marker once again, solve the mystery on the planet Tau Volantis and rectify your relationship with Ellie too of course.

Dead Space games relied more on horror than action. So you had to manage your ammo wisely because it didn’t come at a premium. And depending on the difficulty level it was almost certain you would be required to use body parts of necromorphs at some point during a level because you were out of ammo. And the atmosphere from every level made you feel on edge not knowing where the next necromorph(s) would appear from and your mind was set on survival. The departure from that formula is very apparent the moment Isaac’s story starts. Isaac is approached by two soldiers who inform him that if he wants to see Ellie alive again he has to help them. Ellie was part of a team that went missing while researching information about the Markers. And before Isaac can leave with these two soldiers who give him no choice the three of them are attacked by Unitologist soldiers lead by Jacob Danik who want to kill Isaac because of his tendency to destroy Markers. So your first taste of action as Isaac is against human soldiers while trying to escape a city and planet. This is completely different from battling necromorphs in the confines of a desolate ship in space. However, the departure from the formula in the first two games to being more action-oriented this time around is handled excellently and the excitement factor from a combination of action, story and some horror elements give you plenty to enjoy this time around.

If you’ve never played a Dead Space video game before it’s one where everything is done in-game. So you have to manage your inventory, view objectives and miscellaneous information without a pause in the action. You have two slots for weapons as well as telekinesis and stasis abilities. The telekinesis ability is basically unlimited with Isaac being able to lift and handle objects with it, while the stasis ability takes time to recharge and can temporarily hold an object or enemy in place. These objects can be used against humans directly or indirectly. Fear not. Even though the gameplay focuses on more action and starts off with Isaac fighting human enemies this game doesn’t lack necromorphs. Jacob Danik activates a marker on the colony and so you’re fighting against Necromorphs even before you get off the planet.

This game has very good pacing and has a variety of missions and optional objectives to complete. 3 words: Isaac in space. After escaping Danik’s forces and locating Ellie’s last known position there are a few missions where you have to complete objectives in space and travelling between wreckage from ships unfortunate enough to have journeyed to that location. So even the environments are well suited for the change in gameplay from earlier entries in the series. And it’s very well done. There are enough optional missions to give you legitimate choices on which direction you want to head in first. You can explore one of the ships floating in orbit to complete an optional mission for one of the members of the team or you can ignore that ship completely. And each optional mission comes complete with its own mini-story.

A few new things are introduced to the series as well such as weapon and item crafting. This is not only alot of fun but helpful too especially being able to make your own medkits if you’re running low on them. You can only craft weapons and items at benches located throughout the game. (This basically replaces stores in previous games). At this bench you can manage your inventory and safe too. You craft new weapons or modify the ones you have to need to collect weapon parts and resources during the game from loot drops or containers. You’re given scavenger bots that you can send out to collect additional resources and after a duration of time they will be waiting for you at one of these benches. You can legitimately create any kind of weapon you want from scratch if you have the resources and imagination and save blueprints to share or rebuild that weapon again. The execution of this wasn’t half-baked at all. You put together everything from the weapon handle type (one-handed, two-handed, military, etc) to the tip of the gun. As in all Dead Space games the weapons have regular fire and alternate fire. In this one it’s defined as an upper tool and lower tool. So if you want the upper tool to be an automatic rifle but the lower tool to shoot spikes you can build that. How about a weapon that shoots blades that hold anything you hit in stasis and also launches grenades? No problem. Or maybe one that has a Tesla core and shoots electricity, allows you to heal your co-op partner when you use a health pack and also serves as a powerful melee weapon electrifying any enemy you hit ala Mjolnir? Well why didn’t you say so. And this is just scratching the surface. There are so many combinations that can be explored and I’ll let you do the permutations. And if you don’t like a weapon you’ve created you can dismantle it or modify it. Nothing is set in stone. It’s alot of fun.

There are new suits that are unlocked as the game goes on (or special offers) and they all can be upgraded. Just like weapons they require resources to upgrade although you don’t need to create specific parts. You can upgrade armor, health or even other factors like oxygen capacity or stasis recharge time. There is no customization here except for the numerous upgrades you can do on any of these suits.

The big feature added in this one since multiplayer was removed is co-op mode. You can drop in and out of another’s game and the adjustment is smooth. I’ve done both and it’s not the same gameplay experience. I played with one of my nephews who has completed all the Dead Space games multiple times so even for experienced Dead Space players the co-op mode is far from a gimmick. I’m a fan of well done co-op modes whether playing with a friend, family, spouse or significant other and taking into consideration what Visceral stated they wanted to achieve with this mode I believe they did.

You see what? That’s just a canister

Areas are not just bigger to accommodate two players but are different in most cases. The overall story is the same and it is a great story with more characters and explores the history of the Markers and does shed more light on them. However what one player hears and even sees at times is dependent on whether the player is Isaac or Carver. So when Ellie is sending a transmission she talks to Isaac differently than she talks to Carver. Another example is an optional mission where only the player using Carver can see and hear a dead woman who the two of you have to follow and that entire optional mission is different for both players. Also there is no competition for resources. Loot drops are available for both players. Items can be shared between inventories at any point during the game and you can revive your co-op partner as well. The co-op mode is just as solid as the campaign mode and I recommend going through both so you can have the full experience.

Since I’ve played all Dead Space games it took me awhile to get used to how much ammo I actually had. I never had to manage my ammo because there was plenty of it even on the highest difficulty setting. I understand the need to adjust and not all franchises are successful in trying to make a transition such as been made with Dead Space and since they nailed it this is very minor gripe if one at all. There was significantly less horror in terms of being frightened at something jumping out however it was traded in for excellent gameplay, great story and a fun co-op mode. So I can’t complain about that change when something even better has been added. The cover system seemed a little weak but it wasn’t problematic. And Isaac can roll now. There’s still the dread of the Markers and the necromorphs and the change in music can put one on edge so to me the theme of the Dead Space series has still been preserved in this latest one.

Dead Space 3 is one of the best games I’ve played this year from start to finish and I know it’s still early. It’s more action oriented than previous entries in the series but still retains enough of the elements that define the Dead Space series. The story is engrossing in both single player and co-op mode. There is no multiplayer this time and even though I enjoyed it in Dead Space 2 I found the co-op mode to be even more enjoyable. I don’t want to be greedy but I have imagined what it would be like if the next one, if there is one, has solid single and co-op mode once again and the return of multiplayer. Even without it this was still an excellent addition to the series.