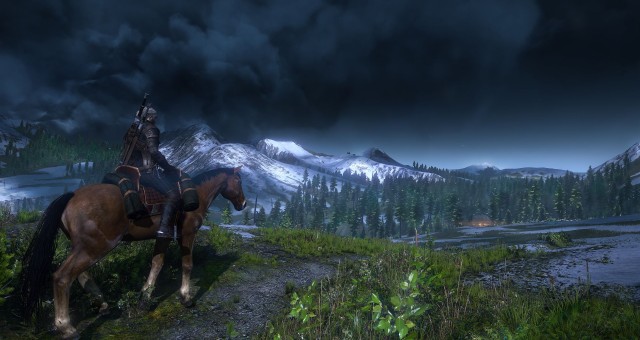 The Witcher 3: Wild Hunt is the sequel to one of my all time favorite games and is the final installment in the story of the legendary Geralt of Rivia. It picks up right after the end of the Witcher 2 with the  Nilfgaardian Empire invasion plan revealed and Geralt’s memory fully restored with help from Letho, another witcher. It was revealed that Geralt lost his memory due to him being taken by the Wild Hunt in exchange for the release of Yennefer, his love. And even though Geralt learned Yennefer was indeed still alive her memory was gone as a result of her time spent with the Wild Hunt and she was now in Nilfgaard. Geralt’s journey to find Yennefer will come to a conclusion in the Witcher 3 but not without having to deal with the repercussions of the invading Nilfgaardian empire and anything else that stands in the way of that.

The Witcher 2 was an immersive game that gave the player a tremendous amount of control in determining the path taken and the events that occurred. There wasn’t an explicit “moral system” in the game that was black and white, however choices had a true impact. The entire experience could be different based on the side you joined, the people you helped or didn’t help or some other quest you completed. This was reflected in the ending of the game as well. The Witcher 3 will not only have impactful decisions for the player to make but will also be influenced by the choices the player made in the Witcher 2. And for those players who didn’t play the Witcher 2 there will be a mechanic that will allow players to have some control over the events that took place in some way.

CD Projekt Red also states that the Witcher 3 will take place in an open world that is 30 times larger than the one in the Witcher 2. And it won’t be an empty world. Towns will be filled with NPCs that will most likely offer additional quests and ecosystems in the wild will be vibrant and respond to events taking place. And since the Witcher 3 will be a mature, non-linear story it’ll be extremely beneficial to explore as much of the world it’s taking place in as possible. According to CD Projekt the main storyline will consist of 50 hours of game play and additional quests will take another 50 hours so there will be plenty to do. And considering the fact that decisions can drastically affect the game there will be a high replayability value.

Initially combat in the Witcher 2 was unforgiving to new players although it was alot of fun and offered alot of possibilities once one became accustomed to the difficulty and used strategy. That was changed with updates to offer a tutorial and gradually introduce players to the combat difficulty so I expect Witcher 3 to have varying levels of difficulty. There will be changes as CD Projekt Red promises more responsive controls, the ability to stop animated moves and in addition to the spells, traps and bombs there will be a Witcher’s Senses enhancement that will allow the player to target an enemy’s weak points. I enjoyed the combat in Witcher 2 and the combat in Witcher 3 sounds even more comprehensive.

I played the Witcher 2 and completed it many times and each time I played it was a different experience. For example, chapter 2 took place in a completely different area with different characters based on the choices I made. Those who were allies in one playthrough were mortal enemies in another. And I had to see all the different endings too. The Witcher 2 can be described as an RPG for a mature audience. I loved everything about it and the support and free DLC constantly released by CD Projekt Red was incredible. They take pride in quality products. So I’m beyond excited for the Witcher 3 Wild Hunt and I will be getting it day one. If you’re a fan of RPGs you should definitely give this a serious look.