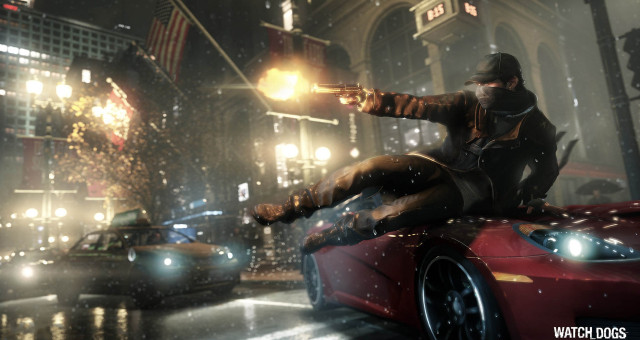 Watch Dogs is the highly anticipated open world action adventure game by Ubisoft starring Aiden Pearce, an incredibly skilled hacker turned vigilante. It’s  a new IP set in an alternate reality Chicago where everything in the city is connected through the CtOS (Central Operating System). It doesn’t just connect everything from cell phones to the mass transit system but also contains all the personal details of every citizen’s life including things such as their personal beliefs. So it knows everyone’s personal relationships, records, etc. CtOS was originally created as a response to a blackout that took place years prior (or so the story says) however as is the case with too many endeavors, something that was created to do good is abused by those in power.

In the world Watch Dogs is set in information is power. So of course, or rather unfortunately, it’s something that people fight over so Watch Dogs is all about information warfare. And even though Aiden Pearce is described as one who is striving to protect his family who is being threatened again he has been portrayed as an anti-hero. And since everything in the city is connected to the CtOS, Aiden’s hacking skills give him an immense amount of power. He can access information on the go about anyone in the city, control the flow of traffic as well as mass transit as shown in the many demonstrations from Ubisoft.

Of course the action consists of more than just information as there will be gun battles and fist fights and escaping from authorities. However this game being built around information warfare is one that truly has me excited because there is nothing like this and all the demonstrations show how beautifully fluid it has been implemented in the gameplay.

And Ubisoft has released a new trailer called Out of Control, which highlights Aiden Pearce’s character in terms of his obsession with information in this world and using it to defend his family. Check it out here. Straight fire.

Watch Dogs is a game that truly has me excited and looking forward to everything about its release. It’s innovative and ambitious and its success can truly have a positive impact on the gaming industry as a result where sometimes it’s easier to churn out sequels as opposed to new series. And with next-gen consoles on the way this can help push games towards more than just better graphics. Yes I will be getting this game on day one. It’s set to be released November 19th.