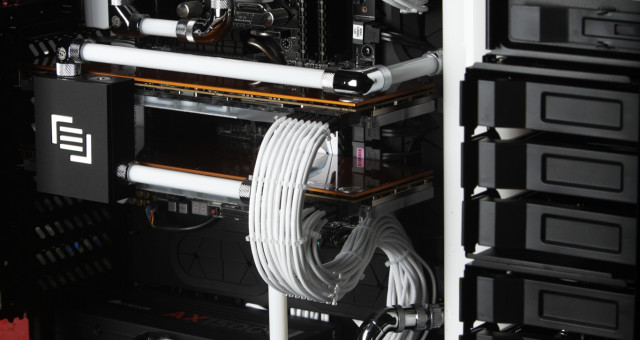 With the first day of PAX Prime 2014 underway, companies want to make a huge splash with their products, and MAINGEAR is ready to impress with its latest desktop models featuring Intel’s X99 Express chipset and its newest 8-Core Extreme Processor. MAINGEAR is a PC manufacturer that specializes in building custom PCs to meet the needs and budgets of gamers everywhere.  The MAINGEAR FORCE Desktop is their high-end model, and combined with the all-new 8-core, 16 thread 5960X Intel Core i7 Extreme Edition processor it’s even more impressive. The 5960X is the first desktop processor that supports up to 4 channel DDR4-2133 Memory, which is great for gamers whether it’s in the form of blazing speed and quality for even the most demanding games or giving you tremendous power to edit HD videos and photos. With this upgrade MAINGEAR desktops will have a performance increase of up to 45 percent in comparison to their previous 4 core processor systems. And as all PC gamers know, getting that extra bit of performance power can make a big difference. Laura Crone, Intel’s Vice President and General Manager for its PC Client Group, states that with the MAINGEAR FORCE desktop “utilizing DDR4 memory combined with Intel’s 8-cores of processing power, MAINGEAR desktops offers these great options for gamers looking for an advantage over their competition.” 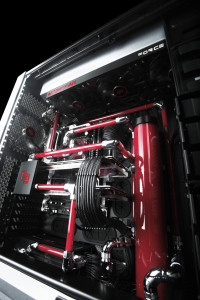 Of course the chipset is only part of what makes an excellent gaming PC, albeit a tremendous part,  the MAINGEAR FORCE desktop offers a case that not only has a liquid cooling solution to make sure the system is running at peak performance but has plenty of space for you to customize as you see fit. It’s cooling solution has been dubbed SUPERSTOCK, and yes it looks pretty sweet but it’s not just about looks as its BiTurbo dual pump system offers redundancy so if one of the pumps fail the other will continue to work properly. It also offers parallel cooling loops, unbreakable tubing and chrome fittings. So if you’re a gaming enthusiast you’ll love what’s under the hood of this system with its pleasing aesthetics. And there’s plenty of space as you can have up to 4 graphic cards, 6 HDDs so you should be set for a good while.

I want to get my hands on one of these so I can test its performance with the games that I have while running different applications since there are times I keep other programs running so I can get in a quick gaming session. And the new Intel Core i7-5960X as the flagship processor for the new chipset, I would love to see the performance for myself. For now, I’ll just watch the video again for the the MAINGEAR FORCE.