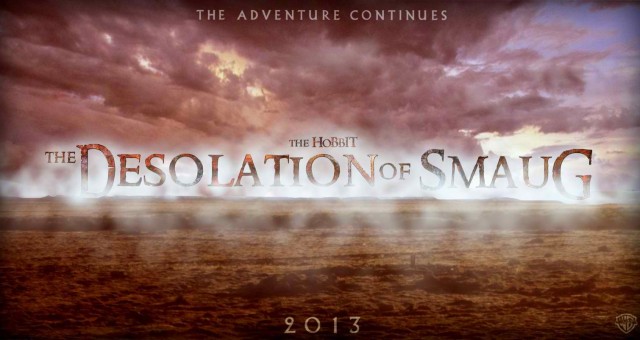 The Hobbit: The Desolation of Smaug

Fans of the Hobbit who brought the Blu-ray within a week of it being released were given access to an hour-long live sneak peek by Peter Jackson of the 2nd installation in the trilogy, The Hobbit: The Desolation of Smaug. And it was indeed a treat with Peter Jackson joined by Jed Brophy, the actor who plays Nori, answering questions from fans and current and past actors in the LOTR series. Viewers were also shown behind the scenes footage of various parts of the upcoming movie as well as introduced to a few of the characters from the book who will be making an appearance for the first time. One of the things this sneak peek had was alot of humor and it was good to see that. And the finale was an exclusive trailer of a scene from the movie that whet my appetite even more.

It started off with Peter giving a quick tour of the offices where most of the post production takes place. They showed things from the layout of the offices to a few motion capture sequences and even Peter’s favorite posters there. It was a simple glimpse into what goes into certain aspects of the “magic” behind the series. Obviously the sole purpose of this sneak peek wasn’t to see desks and computers so it didn’t take long for them to get to Luke Evans joining the broadcast briefly (as a recording) and he will be playing Bard the Bowman in the Desolation of Smaug. For those unfamiliar with the novel, Bard the Bowman is one of the men of Laketown and will be an  important character. Not much was revealed about how the character would be used at that time in the Desolation of Smaug in comparison to the book because that would come later. Peter described Bard the Bowman later as a somewhat shady, Robin hood type character that he’s been having alot of fun toeing the line between him being a good and a bad character.

The broadcast was then interspersed with questions from fans and introductions of characters along with behind the scenes look at some of them in action. The Master of Laketown played by Stephen Fry was shown with Peter continuously cutting away from him talking as an ongoing joke because of a jab at the NZ cricket team. Overall the role of the Master in the 2nd movie was explained and it was stated that the tone of the Master would be true to the book. Fan favorite Legolas (Orlando Bloom) was shown and Peter explained that this movie would be the perfect opportunity to show Legolas since he’s Thranduil’s son. And we all know there’s no love lost between Thorin and Thranduil especially in the movie adaptation due to the lack of help when Smaug first attacked. Peter explained that he always wanted to get into more of the lore of the Wood-elves. And from the clips shown the Wood-Elves will get plenty of action and even though the fighting scenes weren’t shown with the final special effects it was still exciting to see those scenes. And a completely new character was revealed, a female elf named Tauriel played by Evangeline Lilly, who will be part of Thranduil’s personal guard. She’ll obviously be very skilled in combat and the footage confirms that but she will have a storyline that Peter described as being very excited to have created for her.  With the few clips shown I’m excited to see her in action too.

One of the more notable  questions was the one by Stephen Colbert and could only have been asked by a true fan. He got very specific about the elves of Mirkwood and wanted to know if Peter Jackson would differentiate between Thranduil and Legolas, who are Sindar and the elves of Mirkwood who could be Avari, Nandor or a mixture. Think of it as class distinction between the elves and Peter’s answer was yes and I would assume some of that would be addressed through the story of Tauriel, who does not have the same status as Legolas. The exchange was humorous as well with Peter complaining about the quality of a mug he stole. Lee Pace, the actor playing Thranduil also made an appearance so it’s safe to say the elves will have a prominent role in this movie.

Questions were also asked by Billy Boyd (Pippin) and Evangeline that allowed Peter to further elaborate with pictures the realm of Thranduil and Mirkwood. The final question was by Dominic Monaghan (Merry) about the weirdest rumor Peter Jackson ever heard about himself and the answer was one about him moving his family on to a boat so he could avoid paying all taxes.

There’s currently an edited version of this sneak peek still available for those who have a code to re watch but the parts showing New Zealand and the locations used were cut out. And if you’ve never seen this before then just know that the actual locations are just as beautiful as they look in the movies. This was followed by a thank you to the citizens of New Zealand by Andy Serkis on behalf of the entire production crew for the hospitality given to them during all the time spent there. Also a clip was shown from the movie of Gandalf entering the tomb of the Witch-king to investigate further the events behind Radagast’s encounter with the necromancer in the Hobbit. It was about 2 minutes long and had Gandalf startled by Radagast before discovering that all the tombs were empty. Radagast asks who would break into such a place and Gandalf responds “no one. These tombs were opened from the inside.”

As a huge fan of the LOTR series and as one who probably has the majority of the lines memorized…of the extended editions due to watching it so much it would be a gross understatement to say I’m looking forward to the 2nd entry in this trilogy, The Hobbit: The Desolation of Smaug. If you’re a LOTR fan and enjoyed the first Hobbit movie I sincerely believe you won’t be disappointed at all with what’s planned for the second one and will enjoy it just as much, if not more than the first one. December 13th can’t get here soon enough for me.