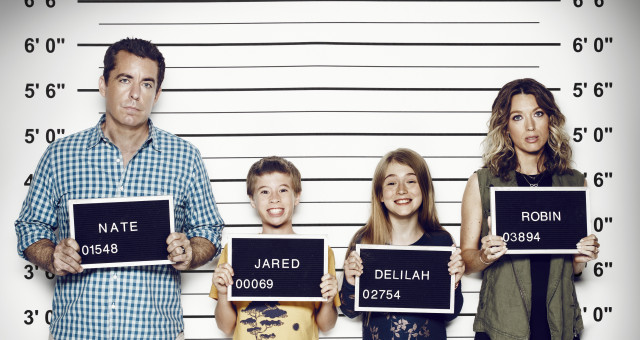 For the past year I’ve been doing a lot of traveling with my wife and it’s been a wonderful experience. Every road trip we took the drive was as much of an experience as the actual destination regardless of where we were going. And anyone who has gone on roadtrips whether as an adult or a kid there are many memories that are formed that remain a part of who you are. It can be challenging, humorous, eye-opening and above it all, life-changing. But what if your life changed drastically before a roadtrip and you didn’t tell your wife and kids that not only you got fired but you plan on being a whistleblower once you arrive at your destination? Sounds funny to you? Well, The Detour on TNT starring Jason Jones is hoping that you do and after a few episodes into the season I would have to agree.

I was able to interview Jason Jones and Samantha Bee, who co-writes, and looking back at the interview now they were spot on in their descriptions. It’s a dark comedy where Nate (Jason Jones) and his wife Robin (played by Natalie Zea) won’t be winning any parents of the year awards. Whether it’s their daughter getting her first period in a strip club or a crazy mechanic installing an Ignition Interlock Device without informing them, it’s been hilarious. Check out the interview below and be sure to give the Detour a shot. It airs on Mondays on TBS. 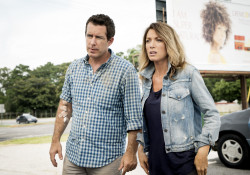 Jason: (Looking at mundane description of show) No. Is that in there, that shouldn’t be. That’s a terrible description. The show is not about that… I think a lot of people will assume when they see that picture, oh it’s “Vacation” and it’s not that at all, it’s a show that is much– I hate to say deeper– but I think it is; we got multiple story-lines going on simultaneously. You actually need to pay attention to the show.

Samantha: It’s actually, it’s serialized, so if you…

Jason: Oh it is, we have ten parts, so if you come at five you’ll be lost

Question: You think it’s binge-worthy or it’s better by week by week?

Samantha: It’s actually, it’s a very good binge, by design, we liked the idea of having a continuing story that built and built, and we liked the idea of having not a cliffhanger necessarily, but definitely something leaving you wanting more at the end of each episode. And we have found that as people have watched episode after episode, they do crave more information, we’re planting little Easter eggs along the way to keep it interesting. I think it’s kind of fresh; I enjoy watching it. I know where all the surprises are…

Jason: I got like ten really jaded [cough] people to watch the first four episodes and they were begging me to watch throughout…

Samantha: They just kind of wanted to know, [laughter]

Question: The tone of the comedy. Is it dark?

Jason: Like I said in the panel, the pilot is probably the safest of the episodes and you know, my daughter gets her period in a strip club in that opening episode.

Samantha: She does. You know what, let me say this, because I think the description can lead people astray. It’s actually a really warm and tender moment that’s also funny, so it sounds like a really broad joke, but it’s a moment in this little girl’s life,

Jason: Ruined by the location

Samantha: and it’s a crazy location, but it’s actually a super sweet moment that I really love and I think that we handled it just right. I think that we got the tone just right, so I wanted to clarify that point actually. 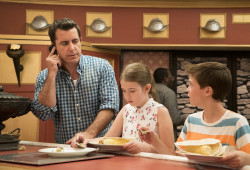 Question: When you do a show like this, do you find everybody comes out of the woodwork with their own stories that they want to incorporate of vacations or trips or anything else gone to hell. Road trips seem to bring out hellish experiences of life.

Samantha: They are Hellish.

Question: I wonder why people do them you know.

Jason: (We’re) staying away from the tropes that we’ve seen so many times in so many great movies.

Samantha: There’s familiar territory. I would say we wanted to stay away from the familiar in a context that you feel like you’ve been there before, but you have not been here, I will say that.

Question: Are there any family experiences that you pulled from like your own personal…

Samantha: I don’t think… I guess there are moments.

Jason: We have relatively sane life, our extended family is not so sane, [laughter] so we’ve incorporated a lot of that, more so than our own cool life.

Samantha: Our kids are still pretty young, too.

Question: So you mean your relatives are all insane?

Samantha: They are all insane.

Jason: Yes, we are the sane ones if you believe that.

Question: You are executive producers on the show as well and, do you find it going from the “Daily Show” working like crazy writing and being on the show as well, is it any easier or is it more stressful also producing a show like this as well?

Jason: Honestly, I see this as same, it’s a longer format than what we did with our field pieces we were producing our own film, with the producer of course, but we were writing, performing, editing.

Samantha:We were very responsible for opening a the “Daily Show” and I think that we’ve taken that responsibility and just expanded it, so we do have a keen sense of– you know, John, one of the best things about working at the “Daily Show” I would say was that John allowed us to explore our own sensibilities and so in that kind of training camp, we really learned who we were and really further learned what we want to see and we were able to take all of that plop it into the detour… 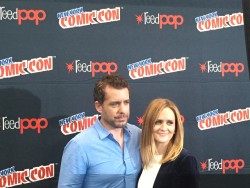 Question: Really you two get along.

Samantha: I know. It’s so gross.

Question: Are you ever worried that the series, you’re going to have to do something to your life to make it crazier?

Jason: Not really, because that’s the one constant in the show, the bond in the show between the husband and the wife played exceptionally by Natalie Zea who’s from “Justified” and “The Following”, so, so, so good.

Samantha: She’s so good, as me, no [laughter]. She’s not playing me, but she’s incredible as Jason’s wife. I will say, watching her play your wife, I didn’t feel a shred of jealously or anything weird, I was just like “oh my God, look at her bringing this character”, it felt so privileged that she was taking the character and making it so beautiful, she’s great.

Jason: But that’s the one bond that doesn’t break in the show, so that’s, you know everything goes to shit.

Samantha: Everything happens to them.

Samantha: They love each other. 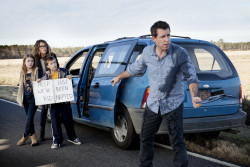 Question: What was a major inspiration for this, you guys said in another interview that you haven’t taken a crazy road trip yet.

Samantha: We haven’t really. Our kids are so pretty little, and they really, oh, you know, I did a road trip with them to Atlanta by myself.

Jason: Yeah, she drove from Canada down to Atlanta, so that’s a road trip.

Samantha: That’s right, yeah, I was visiting Canada, I drove down. Our kids are five and seven and nine.

Samantha: We’re going to do the Grand Canyon.

Jason: She would admit that, but I’m a better driver than her.

Jason: Because I’m a better driver, ask the kids, they’re like “Dad should drive”.

Samantha: No, because you tell them, he tells them that he’s the better driver, but in fact…

Jason: And they believe me, because I say “I’m fastest”. 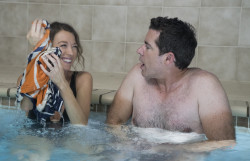 Question: Was this series a hard sell or did you just do that in front of the… and that was enough to sell?

Jason: It was actually a pretty easy sell. We’ve done the networks and we pitched to the gold rooms and we’re laughing and everyone’s nodding along [laughter], it was never a sale, and we went to TV as they did the nodding, and I said “great, let’s do it”. We wrote the script in a week and a half I think, did a couple of pre-writes and then they green lighted and then we’re shooting, like I said sold it in October. We shot the pilot December 15th and they were picked up for February 5th or something like that and then shooting the show July 1st, just a crazy, crazy fast ride.

Question: So you guys write, you produce, you act, do comedy, and you play the cello, right?

Jason: So it says on the internet.

Question: But you own a cello?

Question: Which role do you like the best, with which you are most comfortable with?

Jason: Cello’s definitely first, distant to cello I would say. I think actually writing. I love the writer’s process, just sitting in a room with super-funny people, with no barriers, just a safe room, you know we have discussions of race, sex and everything, religion and it was just a great, great time; it was just a safe, open free speech environment that I loved with a bunch of super-smart people and hopefully that’s reflecting the show.

Question: We’ve all got to know Jason Jones on the “Daily Show,” how different is he in the new show?

Jason: I think that was a character that was rooted in sort of — I don’t want to say Sean Hannity– but that’s how I first sorta based him, which is like pit bull of a shithead; super opinionated; America’s favorite douche-bag.

Samantha: I think your character in the “Detour” in the dad who would do anything for his family.

Jason: Yeah, he’s not bumbling dad, he’s a lot smarter, he’s way more opinionated. He’s bullish with his wife, he’s not like “yes, dear”, but she fights him right back which makes for great conflict and funny scenes. And he gets in lots of fights which is kind of fun [laughter].

Question: Do you have a car you prefer?