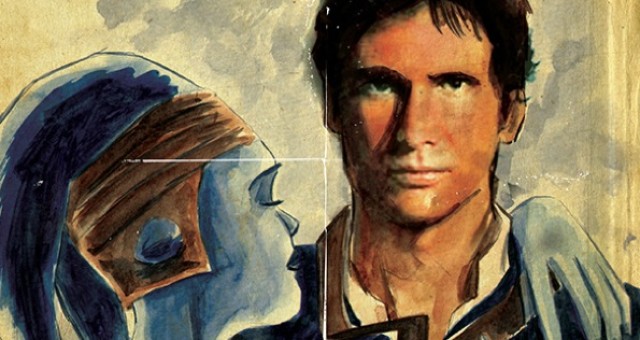 I finally received the Star Wars: Rebel Heist #1 preview and I’m pretty excited about it. And once you read the first couple of pages you’ll understand why. It takes place after Episode IV: A New Hope and it features Han Solo being accompanied by a new recruit, who is also the narrator for the series, during the latter’s first mission as part of the rebellion. After the events of A New Hope, Han Solo is a legend in the galaxy and a hero to the recruit who’s surprised his first mission is with him. But will the reality of the first mission going awry at times change the new recruit’s view of Han Solo and make him believe it’s just luck or is he indeed worthy of the stories being told about him?

This series is written by Matt Kindt and Marco Castiello provides the artwork. The format seems similar to Darth Vader and the Cry of Shadows but the huge difference is Han Solo is directly involved in the events and the narrator is providing a first hand experience as the events unfold. So the problems I’ve had with that series won’t be present in this series. It’s set to be released April 30th and I can’t wait to get my hands on it.