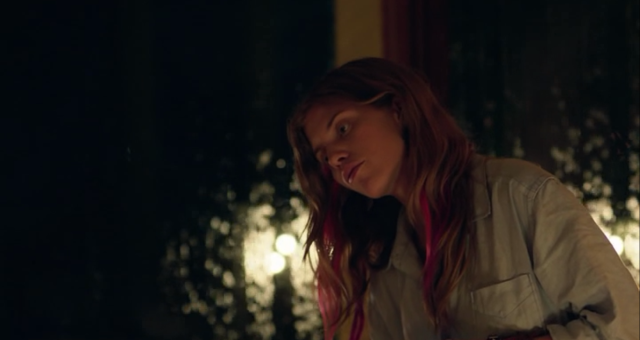 One key aspect in a thriller being an excellent movie is its ability to create an atmosphere filled with suspense and excitement that is so engrossing it leaves you thinking about the events that take place long after its finished. In the case of Scorned, a movie about a woman whose boyfriend cheats on her with her best friend, this is done by taking a situation we’re all familiar with on some level whether it’s through personal experience, friend or family member’s experience, or from watching a popular TV show, and has the scorned women subject them to physical and psychological torture with seemingly no end. Scorned isn’t the first movie to deal with infidelity but the series of events that takes place during this getaway weekend definitely conjures up memories of the classic movie Misery and to me it had some elements that were scarier than some horror movies. Sadie, the scorned woman, finds some sexual text messages between her boyfriend and her best friend and lures her best friend to come to the vacation house thinking it would be another sexual rendezvous. Now I’m not a player at all so I can’t say that watching this movie made me change my ways but it seriously had me thinking, and in this movie catching an STD from infidelity is the least of one’s concern when the other person is batshit crazy. I was able to catch up with Mark Jones, most notable for the Leprechaun franchise and Sadie Katz (House of Bad), the co-writers for Scorned to get more insight into the film, their experience and what they have in store for future projects.

Me: Scorned was described as a story that would make any man eternally faithful, and it was released close to Valentine’s day, so was that a coincidence or was the timing of the release taking that into consideration?

Mark: Yeah, it (did). Actually we thought it would be an anti-Valentine’s movie so we did want to release it around Valentine’s day and figured instead of a soft romantic chick flick, we made this for guys and girls and sort of just wanted to have an alternative to watch with your lover.

Me: What was the inspiration for this movie, since I’m sure just about everyone has had or knows someone who has had a crazy or hurtful relationship? And what did you ultimately want to convey with this story?

Mark: First of all I just wanted to have fun with it and take it way extreme. And sort of just get people to escape into a fantasy they’re not involved in. It’s kind of like watching a car wreck, you can’t look away but you’re happy you’re not in it. That’s what we wanted to do and I think we accomplished it, and that’s how the movie came out.

Me: Mark, you’re known as the one behind Leprechaun, which to this day is responsible for me viewing leprechauns as horror elements instead of good luck, but you also have an extensive career writing for some popular action TV shows. Was part of your interest in co-writing Scorned due to it being a different genre and if so are the challenges different?

Mark: Yeah actually that’s one of the reasons, and Sadie being involved helped me get away from the action 80s television show or some of the horror movies I’m known for. And it was a different movie when we got together and I said you know what, let’s have a male and female sit down and write this thing and have both sides of it. And I think that was part of the reason it was a little unique for me, a little different kind of movie. (We) just wanted to go in that direction and see if we could pull it off.

Me: Sadie, you have a small part in the movie but Scorned is also your writing debut too. What was that experience like and why did you want to make the transition from being just an actor to a writer as well?

Sadie:  I love how you said just an actor. I think that acting is a lot about storytelling so what actors really love to do is tell other people’s stories. So that’s always been something that’s been of interest to me. And working with Mark we both sort of liked the same stories, so we both wanted to tell a woman’s story of being scorned and we were on the same page with that and had the opportunity to do that.

Me: Now I’m not an actor but I understand that you have to prepare for your role and get into character, and that takes some understanding of the character. How does that aspect change when you’re actually the one writing the character? How do you get yourself into that mentality?

Sadie: Oh my gosh, I think Mark and I had so much fun getting into the roles and saying the lines out loud to each other, roleplaying what they would say. I think that was half the fun working in a writing team, getting to spit ball the lines to each other, and one up each other.

Sadie: I love that Mark. It sounds better when you say it. It sounds vain if I say it. AnnaLynne McCord did such an amazing job of saying those lines that I pictured saying, and it’s fun when you have somebody else in your peer group (who) works for you. I just think there’s something really important about doing that exchange and having more female writers or actors that are saying the lines.

Me: Yes, I think she did an excellent job in that role. So what is it about Sadie, the character, that makes her put into action what others only imagine, and in her mind, what is her end game? And is it just a coincidence that the character is named Sadie?

Mark: I can address that. It’s a weird, interesting coincidence. I’ve always like the name Sadie and I’ve known Sadie for a number of years. And when we started writing it we tried different names and I said I like Sadie, I think it works for the character. And Sadie told me some stories of her past relationships and I don’t think it was too far off.

Sadie: (laughs) Somewhat true? Yes. Sadie’s kind of a crazy name. The whole setup with Anna’s character Sadie is that she’s off her meds, she’s really in love, she really wants something great out of Kevin (Billy Zane) and she’s caught off guard. He just picked the wrong time to mess with this woman, and she starts to snap. And we start to find out more about her history later, and not only does he cheat on her but he cheats on her with her best friend. There’s not a woman in the world who wouldn’t say I want to kill him. And we just kind of let her go from there.

Me: I can understand how that is a very deep betrayal because in reality it’s not one betrayal but two betrayals. Yet Sadie’s friend doesn’t see it that way when she says life goes on. Was it the thrill of cheating, the so-called forbidden fruit, or did she truly see it as not that big of a deal?

Mark: I think it’s sort of left to interpretation at that point. I think everybody has been tempted and whatever the circumstances were, I think we had to go with this one, betrayal, otherwise we wouldn’t have a movie. Unfortunately it’s what humankind has been doing from the beginning.

Sadie: There’s a certain point where we realized that she could just look at Sadie and say, geez get over it already, because Sadie was putting them through so much. And at a certain point go “is it that bad, I just slept with him.” And I think there are two types of women and men in this world: the ones who view cheating as the worst thing you could ever do and you deserve to be burned at the stake. And other people who go it’s just sex, get over it already.

Me: Now there are some pretty intense scenes, one that involves Sadie’s friend’s dog in a microwave and the other is a recreation of the infamous scene from Misery. So did Sadie feel at some point there was no turning back and that just made her spiral more out of control or was it the answers she was given that just made it worse?

Mark: Well I have to go on record, I’m an animal lover. (Spoilers removed but no animals were hurt during the filming of this movie) I think it was knowing she could control these people and it was part of her control. She’s just a manipulator and she knows how to get these people to do what she wants them to do.

Me: Sadie I recently watched House of Bad, and Mark you have a history of horror films, so can we expect some kind of collaboration for a pure horror film or is the focus on other genres now?

Mark: Well I can’t say what we will and won’t do. I have some horror movies that are going to come up and maybe Sadie will be involved in some of them. We have a script we wrote that is based on a true story about a home invasion on Christmas Eve, and that’s a script that I think will get done. And that’s a very dark movie, a very interesting movie. So I think Sadie and I will continue to collaborate and there might be an actual horror movie in the future.

Me: Sadie, what future projects are you working on now and do you plan on continuing to write?

Sadie: Well actually right now I’m directing a documentary that is about my journey to have an experience with Bill Murray. I’m on a quest to meet Bill Murray, which is a silly thing, and that’s my first time directing. Then I’ll truly be a triple threat. So I’m excited about that. And I’m continuing to work with Mark writing and looking forward to a couple other film projects I’ve acted in coming out.

Scorned is available on VOD now