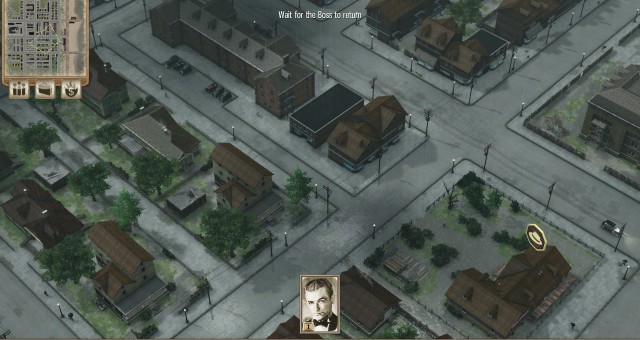 Omerta: City of Gangsters is a turn-based strategy game set in Atlantic City during Prohibition and you play the role of an immigrant new to the city working his way up the crime world hieararchy. There’s a demo available and it provides about 30 minutes of gameplay. It’s story-driven and shows you the basics of acquiring jobs, territory, crew members and alcohol. The demo gives you a fair amount of gameplay allowing you to explore the turn-based tactical combat and it’s very similar to XCOM: Enemy Unknown.
The demo allows you to customize your character by answering a few questions, which decide your starting skill points. You’re given a hideout and you have to visit certain locations on the map to gather information about spots in that district. The purpose of this is so you know which spots to hit up in order to get alcohol or some other commodity. You can take, trade or extort beer, firearms, dirty money and clean money.  For example, you can rob a brewery and sell the beer for dirty money. Then take the dirty money and launder it through one of your legal businesses to acquire clean money. Your actions affect your relations with these establishments so you can understand how raiding a brewery won’t make the owner happy with you. You can also perform jobs, which fall under 1 of 5 categories – beer, liquor, firearms, money and special. Generally the jobs give you more of one of those items than raiding establishments in the district.
Performing jobs is simple enough although there is no way to tell how much time is left before a job or task is completed. I don’t know if that’s just the demo or if it’ll be in the full game as well but knowing that would be useful.
You’re not on your own and can hire (or fire) crew members. Each member gets a daily salary and some can perform certain tasks better than others. You also take crew members into combat with you.  Again, combat is turn-based and each character has a number of movement points and action points that you have to use wisely to defeat the enemies you face. You also have a special ability to use in combat depending on the character. You can level up characters, equip different weapons, etc. The turn-based combat in the demo wasn’t as compelling as I hoped it would be but since I am a fan of strategy games I can overlook that slightly if other aspects of the game are done very well.
The concept behind this game sounds perfect. It’s like Boardwalk Empire meets XCOM. The graphics are great and perfectly capture the look of the 1920s. This is one I’ll keep my eye on although at the moment I haven’t seen enough in terms of execution to make it a must buy for me at this current time. This is one I want to play more of eventually. Give the demo a try