Kingdoms of Camelot: Battle for the North New Features

While I’ve been working on acquiring more cities in Kingdoms of Camelot: Battle for the North, a new update has been released that adds even more new features. I do wish the City Crest drops from the Pictish Camps would improve but these new features are pretty impressive as they range from allowing you to control your city’s defense to graphical updates to just about all icons. Here’s a list of all the changes:

Even though it’s last on the list I couldn’t be happier about the reduced game loading time as this has been the biggest impediment to playing on the fly. Now it’s much easier to jump in and out of game, and if you’ve been working on or looking at something else you don’t have to worry about the game reloading completely. 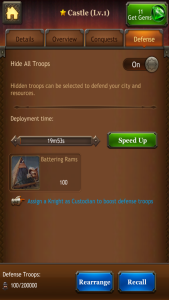 Selective Defense is a big change, and one that can help you fortify your cities in a strategic way so you don’t have to lose all your defenses in just one battle. This can also help you climb the leaderboards for City Siege as well. To assign troops (or hide troops) you just select your Castle and then the Defense tab. You’ll see the new option to Choose Troops at the bottom of the screen, and when you do you’ll get the usual slider for all the troops housed in that city. And if you just happen to see an invading army while you’re playing you can set the appropriate troops to counter the attacking force more efficiently. However there is a deployment time before the troops are stationed there so most likely you’ll have to use a Speed Up boost to counter attacks in progress.

The Hospital capacity increasing is for your fifth city, the City of Solace, which can only be unlocked if you’ve acquired four other cities (or purchase it). I don’t currently have one so I can’t give any details about it at the moment. I am impressed with all the new features as the gameplay is now richer than ever.