Kingdoms of Camelot: Battle for the North 17.4 Update

News, KoC: Battle for the North

Kingdoms of Camelot: Battle for the North 17.4 Update adds even more features to an already impressive list of recent upgrades to the game. The last update added an impressive 3D World Map view but that wasn’t even the biggest change as it became possible to evolve your heroes by unlocking new skills and renown levels. And with the new King-of-the-Hill PvP mode, an even greater emphasis was put on giving and receiving help from your alliance. These new features add enough gameplay elements to provide a ton of fun but the latest update adds a list of daily quests to complete, and each one comes with their own rewards. So the incentive to play daily is now greater than just daily login rewards. Here’s a list of all changes in the 17.4 update:

The rewards for the Daily Quests have ranged from quest badges to various resources, and the tasks have been on the scale of attacking a Pictish camp or exploring with a hero.The Gear Attributes Refresh isn’t currently available but will be very soon, and this update prepares the necessary tabs, etc. to do so. 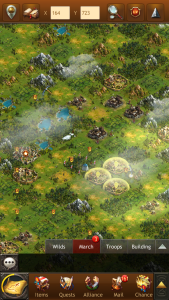 And if you missed all the upgrades in the previous update you can check them out below: