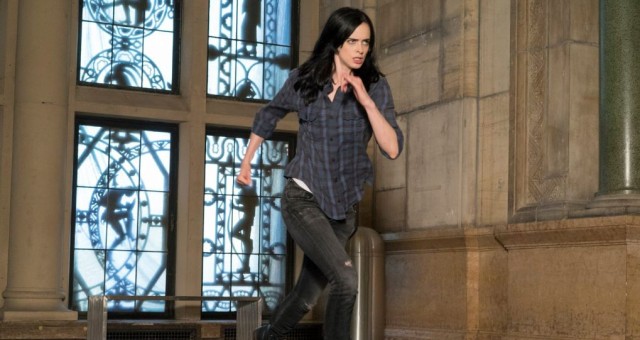 After a phenomenal first season for Daredevil my expectations for Marvel’s Netflix series are sky-high. Daredevil was a masterpiece taking all my hopes and dreams of what the series could be and made it a reality. Next up on the Marvel/Netflix slate is Jessica Jones, and I was fortunate enough to see the first episode last month at NYCC. The wait for the season isn’t long since it’ll be released in its entirety on November 20th, and based on the first episode I would say Marvel and Netflix have another hit on their hands.

If you’re completely unfamiliar with Jessica Jones then you’re missing out on one of Marvel’s more interesting characters. I don’t know how much of it will be imported to the Netflix series but considering the mature audience I don’t think there will be anything they’ll shy away from in this series in terms of remaining true to the character. Without giving away any spoilers from the comic books she’s a private eye who uses her superhuman strength, speed and flight to solve cases in Hell’s Kitchen in NYC or acquire information for those willing to pay. This is the life she chose after her failed bid as a superhero, and she’s haunted by her actions while under the control of one named Kilgrave aka the Purple Man. Check out the latest trailer:

Yes, Jessica Jones has superhuman powers so great action is expected but what will differentiate this series from Daredevil is the twisted psychological manipulation based on the abilities and tactics of her foe, Kilgrave. This is where the show gets dark but it’s still true to the gritty atmosphere in Hell’s Kitchen. And in any good mind twisting show there has to be great scenarios but also great characters in order to feel engrossed in what’s occurring to them. And from the first episode I would say this show has both. The story arc starts off simply as 2 parents enlisting Jessica’s help to find their talented daughter, Hope, who has suddenly gone missing. The pace this issue is noticeably slower in terms of action but there’s great character development with a solid supporting cast. But the ending sequences are truly mind-blowing, and I love them. Ever since watching this episode I’ve been anxiously awaiting for all the episodes to be available for binge watching.

It was electrifying to see the entire cast at this panel, and it is an impressive cast. There’s the lovely and talented Krysten Ritter as Jessica Jones. She delivers on all fronts portraying the character as physically dominate but psychologically tortured at times struggling to find her place in this world. Enough can’t be said about David Tennant as Kilgrave, and after just one episode I can’t imagine anyone else in this role. And I’m glad Luke Cage played by Mike Colter was shown prominently in this episode. And it was great to see Marvel/Netflix not hold back with the interracial relationship and sex scene. But I won’t give away any spoilers. Here’s the rest of the cast: 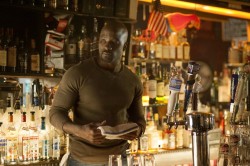 Jessica Jones season 1 will be released in its entirety on Netflix on November 20th. I can’t wait.