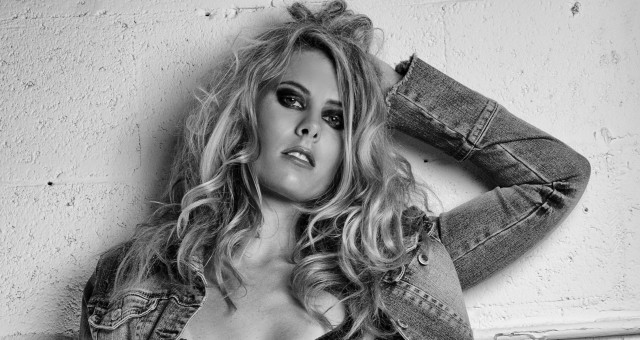 We all have memories of an iconic horror figure who once haunted our dreams, made us be fearful of going camping with teenage counselors or maybe test looking in the mirror while repeating a name over and over. It’s the ability to take a common situation and make us fearful of it while creating an indelible image that separates the best horror movies/series from just the average ones. When I came across Blood Widow I was immediately struck by the image, which is pretty badass, and the premise had tremendous potential for frights, gore and a lot of fun. The premise of Blood Widow is a successful young couple buys a house in the country and the boyfriend decides to invite some friends over to celebrate their new acquisition. What they don’t know is that next door resides the Blood Widow, a remorseless killer.  I was able to interview Danielle Lilley who plays Laurie, the better half of the successful couple. She’s an up and coming actor who shined in every scene in this movie, and the scenes where she had to convey fear or pain I started wondering if some of these scenes were real and not just acting. Danielle has personal experience with moving to unfamiliar settings as she was originally born in Michigan but raised in Florida. She pursued her acting career while in Florida and landed roles in many Independent Films such as “Five Across The Eyes”, “Lilly for a Daisy”, “The Incubus” and co-starred in “Secret Of The Cross (If I Tell You I Have To Kill You)” alongside Tom Sizemore. After this initial success she moved to Los Angeles to further pursue her career and thankfully she didn’t move next door to the Blood Widow.

Me: You have a new horror movie coming out called Blood Widow in June. Can you tell me about this movie and the character you play?

Danielle: The film is quite interesting. It’s kinda like a Friday the 13th meets Nightmare on Elm Street. They really took it back to the old cult classic slasher type horror films, which is really fascinating. (The premise is) my boyfriend and I buy a house in the country and upon moving into the house my boyfriend decides to throw a crazy party. During the party a few of our friends decide to venture off and explore an old, abandoned boarding school,  out in the distance of our backyard.  As our friends start to venture over and explore that’s when the chaos begins and we get introduced to the Blood Widow. Laurie was a great character (to play). She was very compelling to me from the beginning. Laurie is very strong and assertive but also at times she becomes very vulnerable and somewhat of a victim. At the beginning of filming I had several talks with Jeremiah (Buckhalt), the director, about Laurie and he kept emphasizing to me that he really wanted the audience to develop a relationship with Laurie, and he wanted the audience to feel for her. So I truly hope that the audience sees that character development. 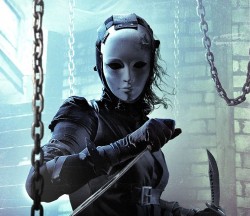 Me:  Your character Laurie was pretty upset with her boyfriend Hugh when she found out that he invited friends over for the weekend and also wanted to throw a huge party that night at the new house. And what provoked the Blood Widow was her own “home” being disturbed. Do you see any kind of parallel between the two characters in that regard?

Danielle: No not necessarily, the great thing about this film is that there are lots of opportunities to let your mind wander and allow you to somewhat develop your own interpretation of why things are happening and the meaning behind Blood Widows actions.

Me: When I was looking at the pictures for the Blood Widow I was thinking she looks pretty badass and usually iconic horror characters who wear masks are male such as Freddy Krueger, Jason, Michael Meyers. Did it cross your mind during filming how significant it was for the Blood Widow to be female?

Danielle: I thought that the fact that she was a female really took the film in a different direction and spiced it up a little bit. We’re so used to seeing all these masked characters in other horror films and they are  typically always male so its nice to have something different, something out of the ordinary.

Me: Not to give away any spoilers but I noticed that your character made some kind of connection with the Blood Widow at a certain point in the movie when she understood what was going on. What do you think it was from Laurie’s backstory that allowed her to form that connection.

Me: When it comes to horror movies everyone has their own perception on what they would do in that same situation as the characters in the movie. And your character was pretty much handling things like a champ. Do you think you personally would have been able to handle things as well as your character did?

Danielle: I would like to think so (laughs). It was fun when I was developing her, she is really such a strong character and I loved that about her.  I definitely think that there is a piece of  me in Laurie.

Me: Speaking of fun, you’re credited in this movie as performing your own stunts for the first time. There’s a scene where you’re climbing out a window and hanging on the side of the house. What was that scene like?

Danielle: Well that was actually a lot of fun.  I am such a tomboy, I love climbing trees and doing crazy things so it was a no-brainer for me.  Jeremy was highly considering hiring a stunt double for me wanted to hire a stunt double for me and I was like listen, there’s no need, it’s just hanging out a second story building no big deal.  It definitely took some persuading to get Jeremy on board but he finally gave in and I’m glad he did.

Me: This wasn’t your first horror movie role. Is there anything in particular that draws you about the genre and/or would you like to expand your career to other genres?

Danielle: I love to work on new projects. Working on something that you’ve never done before and something that challenges you in different ways I think is very important as an artist. With horror films I find that they’re very fascinating and there’s something so mystifying about them, and that really draws me to them. Not to mention that characters in horror films always get to go to really dark and fun places and I love that.

Me: I was pretty surprised about some of the ways characters were killed, and in a good way, so how long did it take to get prepared for some of those scenes emotionally and in terms of special effects/make-up?

Danielle: Well emotionally I can get to those places pretty quick, it’s actually very weird.  As for special effects and makeup it definitely takes some time, Michael Gore the special effects/makeup artist did an amazing job and always made those long chair appointments pretty easy to handle. 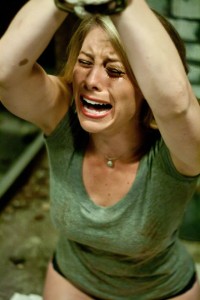 Danielle: No, definitely not. Its my job as an actor to make things look real, that what movie making  is all about.

Me: Do you have any future projects currently planned?

Danielle: At the moment I’m not signed on to do any projects. I’m just really focusing on auditioning and reading lots of scripts and being picky because like I said I want to do something that I’ve never done before and something that will take me different places and  challenge me as an artist. Now I feel like more than ever is the time to really be picky with the next role.  Like they say, you’re only as good as your last project and I feel like I have a really big hurdle to climb to top Blood Widow.

Me: So would you prefer to remain in Independent Films or would you consider a TV series?

Danielle: Everything. The more projects you work on the better. As far as independent vs. TV series, I’ve always loved Indies, I’ve always been a big fan of them, but I would love to work on a TV series as well.

Me: So when you think of an ideal role for you what would it be?

And I hope to see her in many future roles as well because she definitely has the looks and the acting skills. Check out more about Blood Widow on the official site.