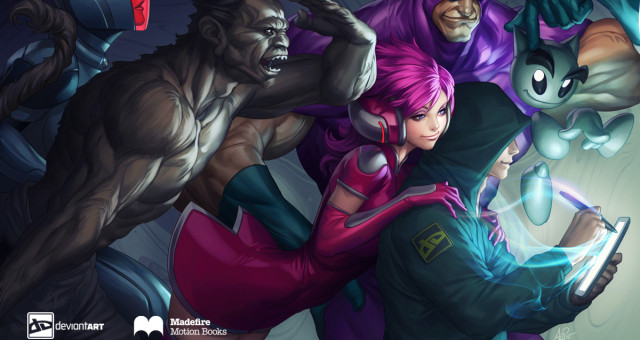 One of the things I love about digital comics is the convenience of purchasing and reading them. It’s not even about a particular app because there are so many platforms to use to do so. Of course I still support the local comic book stores when I can, but being able to get the latest issue of a series or even an older issue at anytime with the push of a button is wonderful. Madefire, a digital book publishing company, has taken things to the next level with its motion books platform, making digital motion books available on iOS and Android devices as well. But they’ve also made digital tools available for creators to make their own motion comic books with their Madefire Motion Book Tools. Are you an indie comic book creator who wants to reach a massive digital audience but don’t know where to start? Madefire promises it’s easy to do using their tools, and since they’re partnered with Deviant Art, there’s a potentially massive audience at your fingertips. I had to take time to interview Ben Abernathy, the Editorial Director, about Madefire and these tools that seem to be every indie creator’s dream.

Me: So what do think had been the biggest challenge since you launched the company?

Ben: The biggest challenge? There’s been – I mean, I have to think about that. No one asked this question. I think the biggest challenge has been on one hand getting the word out. We put out an amazing top shelf product, I think, the highest rated book app in the IOS store. When you come to straight shows, people see motion books and they blow them away. But we’re constantly striving towards greater recognition and wider outreach and user acquisition…we’re very proud of what we do with the motion books. I guarantee you, anyone who checks it out will be blown away. And you’ll have people come here that will be like, “Oh, I don’t like print comics.” (And the response is) “Well, good thing this isn’t a print comic”. Put it on and they’re like “Oh my gosh, I didn’t know you could do this.” Another fan down.

Me: If somebody came up to you and said “What is Madefire?” how would you explain it if they’ve never heard anything about it?

Ben: I’ve been practicing this all week. So what I tell people …Madefire is essentially like a digital entertainment company but we have a studio and we have a platform. We have a platform that features an award-winning app that’s available on all tablet and mobile devices as well as the web. We’re partnered with DeviantArt.com and we have a motion book tool like a proprietary editing software that allows creators to build whatever they want in this motion book experience. And then the platform to load it up to Deviant Art in the apps. Then we also have a studio, (with) John the editorial director. I work hand in hand with a Chief Creative Officer, Liam Sharp, who’s a long veteran in the comic book print world. And so we also have our own studio titles, Mono, Captain Snow, Houses of the Holy, The Irons, Heroes Park, etc. So we have our own ID that we’re developing and we’re experimenting with motion books.

Me: Now, you had a big announcement the other day…

Me: For anyone who’s interested in creating their own comics, can you elaborate more on this announcement?

Ben: Yeah, absolutely. Yeah, it was really exciting. As I mentioned before, DeviantArt.com is our – one of our closest partners. They’re the exclusive web reading experience for the motion books. We started in Deviant a tool that had a June release so they started feedback, playing around with the feedback, fielding motion books and uploading them to DA. But what we had Thursday was we launched a new store front, a Deviant Art storefront, which I don’t know if you’ve had a chance to look at our storefront. I’ll show you right here. So we launched basically a Deviant Art storefront in addition to our other storefronts. So if you go to the main page, you go to Deviant Art and what we have here is a storefront that’s devoted to the deviants that are creating motion books and putting them up on DA. We also have a section called Sketchbooks. That is basically people, they aren’t motion books, but they’re people doing experiments. I can’t really download any here. So it’s like the experiments they’re doing. We have what we call hot books. So these are all DV-created content. Some of them are really cool things. Some of them are actual motion book tutorials that deviants took upon themselves to make even though we provide a whole suit of tutorials. We got all sorts of like Manga-infused content. We’ve got slice of life personal stories. We’ve got static read, page flip stuff. I mean a little of everything under the board. If it’s category, it’s going to continue to grow as the deviants in our community create new content. So it’s incredibly exciting, basically giving them additional platforms. In some cases, almost a more visible platform to the outside world. On DeviantArt.com, it’s obviously very visible. It’s on the main page, and the main content in there. But getting into the app is opening up to a wider audience who might not be aware of what Deviant Art is or who they’re about or who their creators are. So, it’s, sort of, what pillars Madefire stood for from day one.

It’s like creator empowerment, creator first…it’s why our tools are free. We want to empower the creators to build their own stories, the new myths of the 21st century people and to push the envelope on storytelling and it’s even cool to see what they’re doing. It’s not even just motion books they’re doing. We’re starting to see people create photo galleries or books on poetry and tutorials and it’s kind of the sky’s the limit. 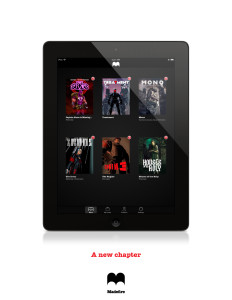 Ben: We’re going to start seeing prose books come up on an e-reader and it’s cool. It’s exciting. We’re, sort of, ground zero and we started a revolution, a new movement of creation.

Me: So what does your platform offer that others don’t?

Ben: Well, first and foremost, it offers motion books. I mean the motion book can only be read in our platform or in our app or on Deviant Art. There’s nothing else in my opinion, and I think most people would agree, that there’s nothing else out there available that utilizes sound and motion in such a unique way to create this benchmark reading experience. So, motion books.

Me: Now let’s say I wanted to go home tonight and create my own comic book. Like Super Bat or something that I –

Me: How would I get started with Madefire? If I had everything; if I had the idea, the artwork in my head?

Ben: You go, I believe, it’s create.madefire.com and you can set up a Madefire tool account. It’s a motion book tool. You get your access and then you can start experimenting immediately.

Me: So you don’t need any special tools in order to do this? It’s all available online?

Ben: Everything’s there. I mean if whatever, however your assets are set up or how you paid the assets, they need to be digital. You know what I mean? Like jpegs or png files. But you can just start uploading your files and start doing (anything). It’s all created on our proprietary software. So, yeah, you can do it like that and you can publish it immediately and see the results. You see the results on a mobile device through, well that explains all that. What have you been uploading in Deviant Art? If we can do a Deviant Art account. Do you have one? And if you don’t, you should sign up and you can start loading it there. I encourage you to start your Superman story. 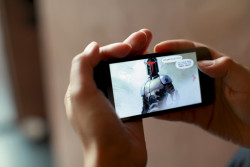 Ben: Right. As far as like different features go that might bring about that interactivity and stuff, we don’t – we have the ability to place –  hot spots and we did do a multi-pack Batman story that was kind of like choose his path type of story that was in framework. But as far as – we’re first and foremost about reading. We’re very passionate about reading. It’s why even though, as we explained and show it to people, there’s the sound and the motion. We never tract some reading experience. We’re not trying to create passive cartoon watching or anything along those lines or “game-afication.” Now while we might develop aspects of features in the tool that would allow…hotspots or something like pop-ups or something in a page, it’s not something that’s a high priority for us. Because we’re more about reading.

Me: Pretty much everybody.

Ben: Yeah, pretty much everybody. Pretty much everybody. Everybody except Marvel. You never know what the future could hold. Yeah, I think those are the main guys. My brain’s a little foggy. It’s like Sunday afternoon after a four-day show but yeah, we’re basically we’re working with everybody. We’re also working with a lot of independent creators as well. Not even just the Deviant Art creators that needs store time. A lot of independent creators who have their web comics or their own indie books. Actually I was talking to a guy earlier that just had his first book published and just like, “Why don’t you put up with Madefire]?” “I can do that?” “Like yeah.” That’s another feature that we’re really active about. That and some of the digital companies, it takes months to get their content up but we’re much more agile and trying to get content up.

Me: Yes. I get that clear. So now, after three years of working on this, what do you see as, what do you want to add to get the company going forward that you may have not thought of before?

Ben: More hours in the day. It’s a good question. I mean I think, an expansion kind of across the board, I think, would be very cool. Obviously, Blue Sky World, there’s functionality like the subscription or bundling, etc that we would like to get into the app and the framework there. As an Editorial Director, I would like to start developing more titles. Be more aggressive in developing the main (titles). There’s a lot of other opportunities out in the world to create motion books. You’re outside of the comic book world. Studios or maybe music labels or you name them, which I think is exciting. So it’s on the horizon and is great. It would be really cool to expand.

Ben: I’m sure somewhere everyone’s brains are made by exploded like, “Ben no!” (laughs)