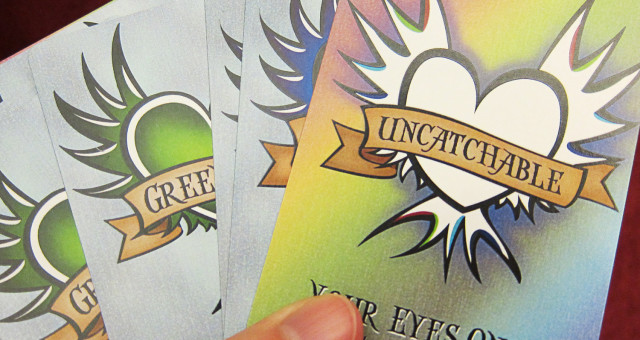 I recently attended Playcrafting NYC Fall Expo to see the latest in upcoming Indie games and I walked away impressed. If you’ve never heard of Playcrafting NYC Fall Expo it’s one of the largest expos where indie developers showcase their latest games with hands-on experience for attendees, and this year there were over 85 games being showcased. There are some games that are enjoyable while you’re playing and there are other games that are truly memorable so when you leave the event you wish you could play them more. Heartcatcher, a 2-player bluffing card game created by Emma Larkins, is one of those games.

When I first saw the setup for Heartcatcher I didn’t know whether to be intrigued by the display or intimidated by the thought of diving into a new card game. Thankfully it was the former because I would soon discover that Heartcatcher is a relatively simple card game but it’s designed in such a way to achieve maximum fun. The rules and the learning curve were easy but the strategy required to win means you have to pit your wits against your opponent…and sometimes just bluff your way to a victory. 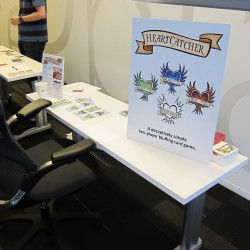 Heartcatcher starts off with a deck of 21 cards and 3 stacks of cards are laid out in front of each player face up, and 3 cards are dealt to each player. (I played against a couple and they enjoyed themselves so I think it’ll even be enjoyable to play couple vs couple as well.) The cards are broken down into 3 main colors: red, blue and green. To play a card the basic mechanics are similar to rock paper scissors. So you can place a red card on top of a green, a green card on top of a blue and a blue card on top of a red. For example, if the top card on one of the stacks is red and you have a blue card then you can place it on that stack. The objective is to place more cards on your side because the belief is that at the end of the game you’ll have a higher score because each card has a score. Simple enough? It sure is but there’s a twist to the game play and this deals with secrets at the bottom of cards. 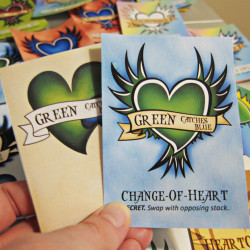 Notice in the picture above that at the bottom of the card it says “Change-Of-Heart.” Cards that have a phrase at the bottom of them have additional features and you can decide to use that card as a color card or play the secret at the bottom by placing the card face down below any stack. This is where the strategy and the bluffing comes into play. I had to hide my excitement knowing I was placing a Change-Of-Heart card below my opponent’s  when they believed they were building a strong stack. It can take a minute to learn all the different secrets at the bottom of cards but none of them are difficult to understand. yes it helped to have Emma explain it while we were playing but again, the learning curve isn’t steep. So you can have fun playing even the first time around. Here’s Emma doing a great job explaining the rules.

Once all the cards were dealt and placed at the top or bottom of the stacks it was time to add up the scores. Cards played as secrets are handled first before adding up the total for each side. It was pretty fun seeing a stack switch sides knowing the benefits of those cards and seeing my opponents’ faces. This is the moment when I understood even better how such a simple game could have such an extremely high replay value and create numerous possibilities. Some of the great card games come with a feature that can throw a monkey wrench into an opponent’s well-thought out strategy and Heartcatcher definitely has that without feeling frustrating. This round didn’t take long to play but I could see hours of enjoyable game play on specific nights, while traveling or just when you want to have fun.

The only bad thing about Heartcatcher is that it won’t be available until the first quarter of 2016. However, you can catch Emma at the next Playcrafting Expo in January. So for now check out a live demonstration of the game below.