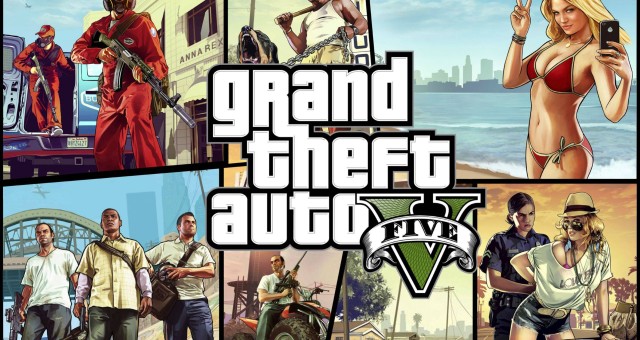 GTA V is the next entry in the Grand Theft Auto series by Rockstar Games and Rockstar is promising that this will be the biggest and greatest one yet. Of course that’s a claim generally made about the latest game in any series but from all the information known about GTA V it will definitely be the biggest one and seems to be on track to be the best one. It’s set in San Andreas for the 3rd time in the series and in the city of Los Santos. But instead of just being a replica of the state and city in earlier games there are some major changes and additions. First, the open-world of GTA V will be larger than GTA: San Andreas, GTA IV and Red Dead Redemption combined. Or as I like to describe it, f&*king huge. It would be a waste if the world was just bigger and there was nothing to do in it and/or it didn’t feel lively. So of course aside from the main missions there’ll be various activities to partake in from heists to helping citizens, yoga, underwater exploration and just about anything else that’ll be fun. I haven’t seen anything regarding playing video games, which should be a good thing even though I admit I was one who did try that. (Video game inside a video game was probably what inspired Inception…or maybe not). Yes, I wrote underwater exploration. Obviously the city of Los Santos would have to be detailed but there will be an ecological system in the game as well. It’s been confirmed that there will be sharks and other forms of wildlife this time around going about their business. So exploration should be fun but could be dangerous as well.

And for the first time ever in a GTA game there will be 3 completely different protagonists. Rockstar is promoting this so heavily there’s a separate trailer for each character: Michael, Franklin and Trevor. Michael is married with kids and even though he’s rich from his past criminal activities he’s going through a midlife crisis. Franklin is a repo man for a shady business and he’s trying to get rich without losing his life in the process. And Trevor? Trevor is just basically crazy (and also Michael’s former partner in criminal activities). Their lives will intersect in this game of course in what’s being described as the “pursuit of the almighty dollar” but you’ll be able to switch between characters at will, who will be going about their business when you’re not using them. This adds a unique aspect to activities in between missions because each character will have different lives, different families so everything you do will be from a different perspective. And there are RPG elements to this game like earlier in the series so yes the more you do a particular activity the better you’ll be at it. And one protagonist might be better at a particular task than another because of the different skill sets so I’m looking forward to seeing how that plays out in the game. Michael is able to slow down time in gun fights matrix style, Franklin can drive the best due to the ability to slow time while driving and Trevor can deal extra damage for a period of time. In addition to the 3 protagonists you’ll be able to form crews to help in one of the many activities in the city. Rockstar states that missions will “require careful preparation, recruiting, and precise execution.” And yes, once again it’ll be possible to buy property in GTA V.

GTA V will also have multiplayer so you can form up your crew and compete against others .

I am pretty excited for this game and even though I enjoyed GTA IV the return of certain game play elements such as the RPG elements, customization and property acquisition has me already believing this game will be much better than its predecessor. The ability to switch between 3 protagonists with different skills at will regardless of which activity they’re partaking in when you’re not using them has me extremely intrigued. Have you been waiting for this as much as I have?  It’s currently set to be released on September 17th for Xbox 360 and PS3. If you can’t wait check out the latest trailer to hold you over.