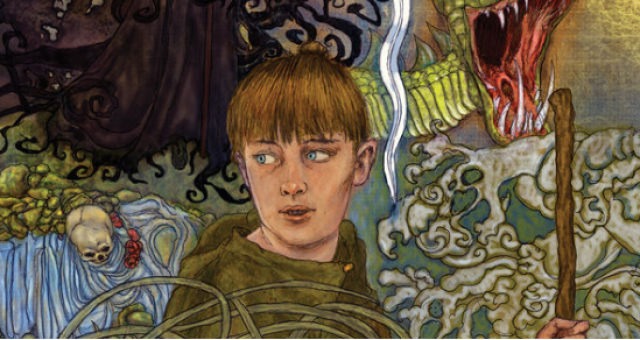 After reading the Eye of Newt #1 preview this is definitely a series I’ll be looking forward to reading. It’s described as being “for fans of The Hobbit,” and it features a wizard’s young apprentice who has to go on a dangerous quest to acquire an element for the headpiece of his staff. It’s written and drawn by Michael Hague, and considering he illustrated the Hobbit in 1984 it’s no wonder the connection between the two is made. The artwork in the preview does an excellent job in highlighting all the fantasy elements in the story and wants to draw the reader into a magical world where anything is possible. That’s very much like the young apprentice who has a tendency to let his imagination take him places even in the midst of preparing for this all-important quest, which his master believes is the work of hidden dark forces since no one this young has ever been called. Nonetheless the quest has to go forward and it’s a matter of life and death for the young apprentice. The Eye of Newt #1 goes on sale June 18th.