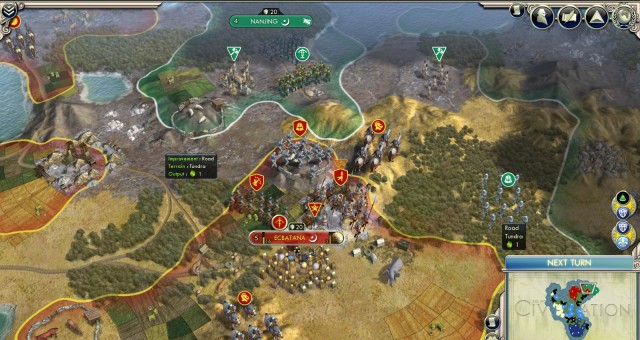 Civilization 5 Brave New World is the next expansion DLC by 2K games and adds new gameplay elements and enhancements. This DLC will be relatively massive with additions ranging from new civilizations and units to international trade. The last DLC focused more on religion and this one focuses more on diplomacy and culture. Brave New World changes the Culture Victory so it’ll be possible to dominate the world using the influence of your great works and wonders. There’s also the new World Congress to promote policies and ideologies that will help your civilization and will give more depth to diplomacy. Two new scenarios, American Civil War and Scramble for Africa, round out this DLC nicely.

The list of additions is very impressive. The first one that caught my eye was the World Congress. This will definitely give more depth to diplomacy in this game and will raise even more the importance of City-States. According to the official site you’ll be able to vote “on critical issues like implementing trade sanctions against rogue nations, limiting resource usage, designating host cities for the World Games, and the use of nuclear weapons.” This gives more options to defeat other civilizations or for example, severely cripple the resources being used by a civilization at war with you and result in them losing the upper hand. And with the new ideologies feature that has you selecting either Freedom, Order or Autocracy to explore new policies, I’m expecting this to be alot of fun and result in even more replayability.

Next was the international trade routes. Previously it was all about a Great Merchant embarking on a trade mission and Brave New World seeks to create a more robust trading system. You’ll be able to build caravans and cargo ships that actively go back and forth between your cities and the civilizations you are trading with so yes it’ll be possible for civilizations you’re at war with to disrupt these trade routes. However you’ll be able to trade much more than just gold and will be able to trade internally as well so resources and food can reach cities that are strapped for supplies.

And the Culture Victory has been revamped. Instead of a passive way in achieving a cultural victory there will be Great Writers and Musicians in addition to Great Artists and they can create masterpieces that can be used in buildings throughout your empire to increase culture or influence other civilizations. The site also states that you can use “Archaeologists to investigate sites of ancient battles and city ruins for priceless cultural artifacts.” So I’m assuming that you’ll be able to use culture as aggressive as religion in the Gods and Kings DLC and pursue this path to victory from the start. There will also be 9 new civilizations with their own units, buildings and leaders to compete against or use. It wouldn’t be complete without new Wonders and there are 8 of them.

I have the Gods and Kings DLC and the change wasn’t cosmetic at all. It thoroughly improved what was already a great game and added a system that increased the replayability tremendously. It was like an addiction that just became more potent. So when I see everything that Civilization 5 Brave New World DLC will add I know it won’t be cosmetic either and will drastically improve game play. I’ve been playing the Civilization series for decades and this DLC can easily make Civilization 5 the best one by a longshot.