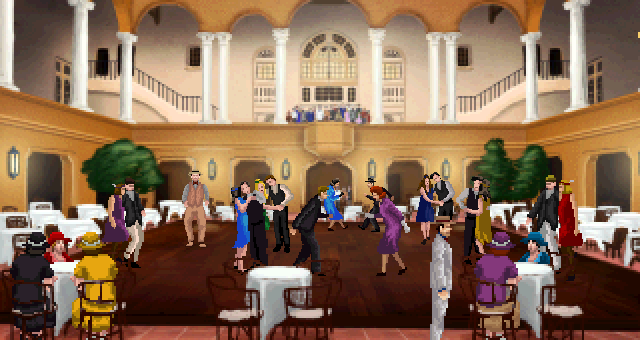 Since I’ve enjoyed many of their games I was really excited to have the opportunity to play Wadjet Eye Games upcoming game and get a hands-on preview of A Golden Wake. It’s a retro-styled adventure game developed by Grundislav Games with an emphasis on retro as it’s set during the 1920s in Miami, Florida when it was on the verge of an unprecendented real estate boom. You play the role of Alfred Banks, a salesman who strives to be successful during this time while contending with the mob, the looming Great Depression and even natural disasters. However it opens up on a snowy day in New York City in 1921 with Alfie, as his friends call him, heading to work at Morris & Banks, a real estate agency co-founded by his late father. After a quick chat with the local newsboy Alfie heads inside the office where one of his co-workers informs him that the boss is waiting to see him. Usually that’s not good news but considering Alfie is the top salesman in the office by far the bad news isn’t entirely for him. Mr. Morris tells him that with all the competition in the area and poor sales that one of the workers has to be let go, and he wants Alfie’s advice as to which one of the other two should go. It doesn’t help that they two of them already have animosity towards him because they’ve already been conspiring and complaining about him to each other. So when Alfie’s private meeting with Mr. Morris ends, and Mr. Morris leaves him the key to lock up his office while he’s gone, the two of them get to work on their scheme, which is to distract Alfie long enough to take the leads from Mr. Morris’s office. But it’s not so they could do their jobs better but so they could set Alfie up so when Mr. Morris returns he ends up getting fired. Not one to be deterred, Alfie decides to pack up and head to Miami for a fresh start since he’s aware of a potential real estate boom and could make a name for himself. But does he have what it takes to make it?

The controls are the standard point-and-click scheme with the left-click used to interact with an object and the right-click to look at an object. And you access the inventory by moving the cursor to the top of the screen, and when you select an object the cursor blinks while the name of the selected object shows at the bottom left of the screen. So it wasn’t the controls I was focusing on but the environment, as the call from the newsboy in front of the office was a call to the 1920s with the calm picture painted by the falling snow belying the true machinations waiting inside the office. After walking inside I clicked on everything possible, of course, and I noticed that the commentary for the descriptions of people and objects was more functional than witty. This would be a testament to Alfie’s character, as there was very little to go on in terms of his personality in the parts I was able to play other than him being very successful at his job and having a strong determination. After the above mentioned conversation with Mr. Morris I witnessed first hand why my co-workers were so pissed at me, and that was because I was completing sales left and right while they did nothing at their desks. Maybe it was just the nostalgic feel of A Golden Wake at this point, or a trust in Wadjet Eye but I found myself intrigued by this setup despite the lack of a talking ghost, device with the capability of destroying cities or a futuristic world. Or it could’ve been something in the water I drank from the water cooler while looking around the break room. Either way I was completely on board when Alfie made the decision to pack up and head to Miami.

The gameplay and story would become more interesting after reaching Miami as the relatively bustling city with residents and cars passing by would serve as an indicator of the increased activity while trying to make a name for yourself. There was one situation where I had to convince prospective buyers at an auction to overcome their hesitation and buy a house. This was an interactive feature that required me to match up the desires of the buyers with the houses on sale based on the information given about both and dragging the names to specific houses. This was an interesting puzzle that put me in the shoes of Alfie, which required following certain steps to break the ice first, and feel like an actual salesman. There was another occasion where I had to fit in at a men’s club where the discussion turned to Prohibition and enforcing it, and the vibe was so engrossing I thought Nucky Thompson would walk in as if it was an episode of Boardwalk Empire. It wasn’t just that sequence but all the puzzles being logical in the context of the world of A Golden Wake as opposed to feeling random or gimmick, and all the while the story felt as if there were some underlying secrets that were also dangerous even though I didn’t encounter any in my preview. 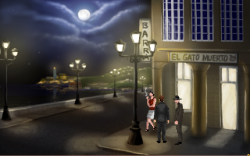 However I was overall impressed by my hands-on preview because the feel of the retro-style adventure games was indeed there, and the deliberate story build-up suggested a well-crafted tale that wasn’t just about going through the motions from one puzzle to the next but trying to pull you into its world completely. And that’s one of the things that makes an adventure game a classic. So whether it’s condemning a man’s house because of violations or stealing designs, it all feels part of an overarching scheme that will lead to some exciting and rewarding scenarios. The hands-on preview was only about 2 chapters but it appears to me that Wadjet Eye Games has another gem on its hands. It’s set to be released this Fall but for now check out the trailer below.