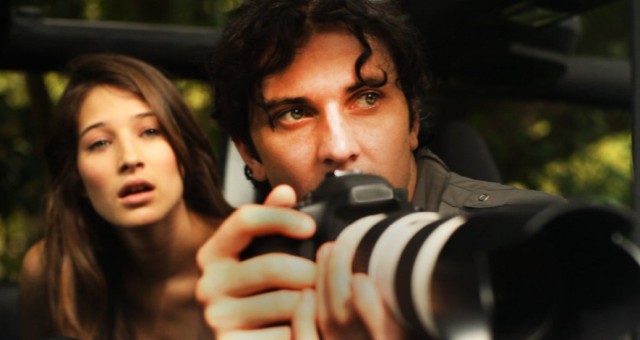 Q&A w/ Will Vazquez, Director of Murder in Miami

There are times when a good mystery thriller is what’s needed so when I heard of Murder in Miami I wanted to give it a shot. Murder in Miami is about a serial killer who targets beautiful women but there’s no pattern to how they’re killed other than the fact they’re killed in the most brutal way possible in their given situation. And the only thing that connects the women being murdered is their association with a successful photographer who they worked with or had a fling with. And with the police turning their sights on him as the only suspect he has to clear his name before it’s too late. I was also able to interview the director and writer, Will Vazquez, who was able to give me some insight into his movie as well as his upcoming projects.

Me:  Murder in Miami has been described as a De Palma-esque thriller, so what was the inspiration behind this film? Was it a specific movie or your own life experience?

Will: There are always murders going on in Miami but there’s always some crazy stuff. Remember the cannibal who (partially) ate (another’s face)? Well, I remember watching the news one time and there was a story about an out-of-town model who had just come out of this big 24 hour club in downtown Miami and got murdered. It was a terribly tragic story and she ended up in a dumpster. Even with shows like CSI: Miami, people watch these shows and they see the person who was murdered has all these great clothes on like Prada. And I think certain parts of America would rather (end up) dead looking fantastic in Miami than live in Cleveland. So I remember seeing that and thought wow this would be a pretty cool (concept) for a story. And since I used to be a photographer and was always a huge De Palma fan so I was looking to do a thriller type story. And a lot of it we draw inspiration from De Palma, the trilogy of what I consider De Palma greats, Body Double, Dressed to Kill, and Blowout.

Me: I read that you had a career as a photographer as well and most notably worked for Playboy. How much of this movie, or rather, how much of the life of the main character was based on your experience in that field?

Will: Yeah when I started out I had a career as a Playboy photographer. I did some for the main magazine but most of my work came from Playboy’s newsstands special, which were Playboy’s Book of Lingerie, Bathing Beauties, Playboy’s Book of Nudes. And then I transitioned to filmmaking around 1998, which was a while ago. But mostly I do TV commercials for a living. And I wish I was as cool as he is but I’m not. What I really used was the world that it is (such as) being around beautiful models, you have access to great places because you’re a photographer. That’s pretty much what I drew (from my experience) but my life was completely different from his. But mostly the concept of being a fashion photographer. It’s actually a lot harder than people think. I showed people the reality (in comparison) to what people perceive it to be, which is him having a great time with beautiful models, going out with beautiful models, and photographing beautiful models on the beach.

Me: This is your third film, Quick Pick, Mysteries of the Opposite Sex, and this one. And I noticed that you served as producer, director and writer on all 3. Is that due to a specific vision that you have and want to bring to life for yourself or due to other circumstances?

Will: The reason I serve as producer, writer, director, and actually shoot the movies…first I love making movies. Secondly because of budget reasons. I would’ve loved to have other people handle those jobs but because our budgets were low we had to make it all happen. Even writing, I’m not particularly a writer but I couldn’t find anyone that could write it for the money I could pay them because we didn’t have the budget. So I went ahead and hammered it out. And I enjoy it, I have a vision and I really do enjoy producing it and making it all happen…finding the actors and casting it. The whole process is very entertaining to me.

Me: As a photographer you’re always trying to convey a form of a message through images. How much of an influence did that have on you wanting to make films?

Will: With photography you have to convey an emotion with one frame, and have to tell an entire story. With movies you obviously have a series of frames to convey a story. But the problem with a photo is you can’t make someone cry because you show them the picture of a stranger, or make someone be in fear like you can with a movie. If you’re the director, especially of a thriller, you play the audience like a piano and you can choose when to hit the notes to raise their emotional level or lower them. So movies are a much more powerful medium when it comes to that. And I enjoy that movie aspect of storytelling and there’s no other art form that makes you feel like that.

Me: In the beginning of the movie during the first murder, the murderer makes a point to distort the model’s face before killing her. What was the tone you wanted to set?

Will: I feel like that’s the ultimate horrible thing to do to a model. To burn her face, man, is (horrible because) it’s like the whole thing that sets apart is her beauty. And so we wanted to show the brutality of this killer.

Me: Later in the movie James is having sex with another model and she’s shown leaning over the balcony during the scene, and the imagery shows the rush of that kind of living on the edge. Was there a deliberate parallel you wanted to draw between the two scenes and if so, why?

Will: Yes, (at that point in the movie) we’re not sure if James is the killer or not. Obviously he’s the prime suspect but the audience doesn’t know if he’s the killer or not. And having him where he has the power in that moment with the girl and that he could actually throw her off the balcony while having sex with her, we wanted to create that feeling in the audience of “oh my god is he gonna throw her over.” And of course that feeling of living on the edge.

Me: You cut back to the Miami skyline between scenes many times, what was you trying to emphasize with that?

Will: Miami plays a role in the movie. If Martin Scorcese can pay homage to the city and like showing images, and Spike Jonze can show images of L.A. in Her (I can too). Plus Miami has a sexiness to it, and going back to being a playground for the rich during the Prohibition Era. Miami itself is like a city of debauchery. Miami is like a beautiful girl that you want to have sex with but once you do you realize she has a bunch of problems.

Will: Yes I did. In fact, I’m from Miami and I have a lot of Haitian friends. And the tragedy that happened in Haiti was horrible and I wanted to draw attention to that. And there had been fundraisers like this where artists had pitched in for Haiti. And I wanted to draw attention to that to keep it in the minds of others. It’s important what happened over there and they need help. And unfortunately it also ended up becoming something where people used it for their own advantage. And so I wanted to show that aspect as well, the irony.

Will: As most people will tell you, the biggest obstacle is money. You gotta find the money to make the movie. The way that things are structured now there’s very few room for small movies to come along. Even though there are all these different places to see movies it’s become harder and harder to monetize low-budget films because without the theatrical runs it’s difficult to make money. So the hardest thing is film financing. We need smaller producers to step up and fund some movies so you can tell some great stories.

Me: Do you have any other projects in the works right now?

Will: Yes, we’re putting the final touches on a futuristic Frankenstein tale about a young student that builds an android to serve him. But it’s a story that tells us that we may not be able to control it when we do start to create artificial life one day. It’s a sci-fi thriller.

Me: I’m looking forward to it. Thank you for your time