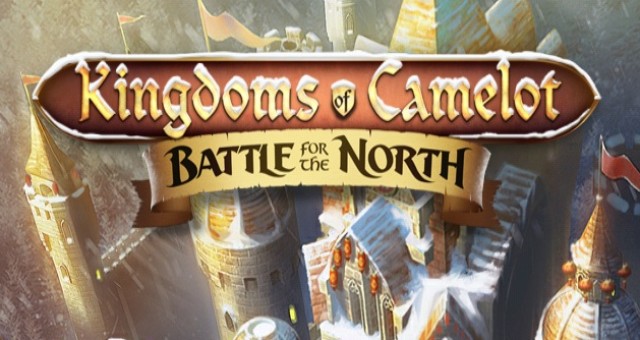 Kingdoms of Camelot Battle For The North

Kingdoms of Camelot Battle For The North is a free-to-play massively multiplayer strategy action game developed by Kabam based on the lore of King Arthur and the Knights of the Round Table. Improve your kingdom by amassing resources needed to construct vital buildings, research technologies and boost your standing in the world. But you’ll also have to worry about enemies and not just in the form of Pictish camps throughout the world but other players who would want to ransack your cities for your resources or to improve their own standing on the leaderboards. However you won’t be able to do it alone so joining an alliance is crucial for the survival of your kingdom as you can receive and share resources, help research technologies or build troops faster due to the help from your alliance. And of course your kingdom wouldn’t be complete without the knights of the round table so you’ll have to make sure you develop them through battles and using special boosts when available. And to really give them the advantage in battle you can craft special gear for them that will strengthen them and make them better leaders of your troops in battle. Do you have what it takes to rule Camelot? 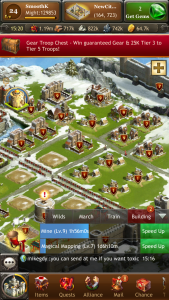 If you’ve played a Kabam game before, such as the Hobbit: Kingdoms of Middle-Earth, then you’ll familiar with most of the game play mechanics. If you’ve never played a Kabam game before then it’s important to know that this game has a “wait or pay” model so completing certain tasks requires a different amount of time to elapse before it’s completed. However you’re not required to pay anything and if you play games on the go then it’s easy to get involved in other things during the day and come back to it later. But I’ll get into more of this later as I’ve been playing this game for months.

The game starts off with a tutorial showing you the basics of constructing buildings and researching a technology as well as the 3 different views and the function of each. There’s the city view, the field view, and the world map. You’ll spend the majority of your time in the city view because this is where your vital buildings are that control the functions of your kingdom, and your castle, which is the center of your kingdom. You have about 31 plots to construct your buildings on and there are 10 other buildings you can only construct once per city such as the Knight’s Hall, the building which allows you to manage your knights. And you can use the remaining 20 plots to construct Cottages and Barracks as you please, which increases your population and allows you to train troops, respectively. The field view is where your resources are produced and you can increase production by building Farms, Sawmills, Quarries and Mines, which produce food, wood, stone and ore, respectively. You can level up each building in your city and field views to a maximum of level 9, unless you have a special item to raise the level even more. Everything in your kingdom requires a certain amount of each of these resources plus gold whether it’s a building, troops or a research topic, and raising the levels of your buildings increases the benefit that building provides. So, for example, raising the level of your farm results in your food production per hour increasing, and raising the level of your castle results in the increase in the number of field plots available. The world view is where you can interact with other players, attack Pictish camps or capture wilds and other locations. And the graphics aren’t stunning on any level but they suit the purpose of this game and a few little touches, such as seeing small people walking around in the city, improves the visual impact. 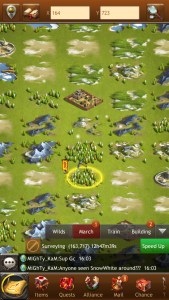 You can quickly access some of the functions of your city buildings through the toolbar at the bottom of the screen so you don’t have to keep switching between the city and field views so much. Now the wait time varies from building to building and level to level. So a level one cottage can take 3 seconds to build but upgrading from a level 8 to a level 9 castle can take a day. However many buildings and research topics are intertwined so before you can even raise a building to level 9 you’ll have to research or have the required topic or building. The wait time can be prohibitive on the highest levels especially since you can’t queue the construction of buildings or researching of topics. Although you can queue the troops you want to produce if you have more than one barracks in your city.

It’s when you get beneath the surface that the gameplay becomes more enjoyable and the Kingdoms of Camelot Battle For The North also adds a different flair. For every level you raise your Knight’s Hall you acquire a new knight, which you can level up by attacking other players or attacking Pictish camps on the world map. You’ll acquire XP whether you win or lose the battle but if you lose all your troops will be wiped out except your knight. You can also assign your knights in one of four roles within your city at the cost of gold to either increase production, training speed, research speed or construction speed. Knights are also responsible for leading your troops in conquering wilds such as woods, mountains, etc. The purpose for doing this is so you can survey that location and uncover all types of treasures including gems. The treasure you uncover can in turn be used to craft different items including gear. 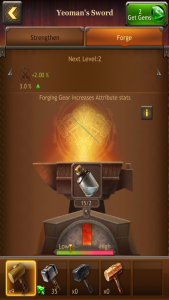 It is a lot of fun surveying different areas to see what you can uncover, and you can survey the same number of locations at one time as the level of your Rally Point building and the number of knights you have to lead your troops. This gives you plenty of things to do while waiting for different tasks to complete so you’re not just restricted to playing once every 24 hours, or rather just selecting a task once every 24 hours. The same goes for crafting gear, although there is a slight learning curve just due to the fact that when you’re first shown how to craft gear it could be some time before you have what’s needed to craft it. You can also strengthen the current gear you have and this adds another level of enjoyment and was surprisingly engrossing.

Combat in this game is ok but slightly less enjoyable when it comes to just attacking other players or being attacked by other players when you’re at a lower level. There are 3 different troop types, melee, ranged, mounted, and each one has a weakness against another troop type and the combat is done in turns automatically matching troop types according to their strengths and weaknesses. The reason it’s less enjoyable when attacking other players is because it’s based solely on might and your entire army can be wiped out in one battle if your city is attacked and you don’t have your troops hidden. So it’s possible if you’re not part of an alliance that helps you that you can be farmed with no way to get back at another player consistently. But with the crafting system and the number of different troops there’s more to enjoy than not when it comes to combat.

As one who enjoys strategy games, Kingdoms of Camelot Battle For The North, truly has so many of the elements that make a strategy empire-building game so much fun but in mobile form. It’s enjoyable to plan out your cities while managing your resources and troops, and researching new technologies. And receiving help from your alliance is a very necessary relief. And as all lovers of strategy games will attest, a really good strategy game can be addictive. And I’m sure that was factored into the decision to use the wait or pay model with this game. Yes you don’t have to pay in order to play the game but the wait times on the highest level are very prohibitive and once you reach level 9 there’s a pay wall that prevents you from getting higher unless you pay for a lot of individual items. There are many bonuses, contests and events that occur where you can earn these items so patience can be rewarding but the advantage is definitely given to those who pay on a consistent basis and the items aren’t cheap. Another issue is the load time it takes to start the game and considering you have to wait for everything to finish it’s not possible to just have the game open constantly especially when playing on the phone. And if you switch to something else or just don’t use your phone for even 4 minutes it has to reload everything all over. And so the time it takes for you to open up the game can be longer than the amount of time you can perform actions depending on your current state. A faster loading time would help tremendously. So aside from the pay model and the long load time this is a solid strategy game.

Kingdoms of Camelot Battle For The North is a solid, and surprisingly deep massively multiplayer strategy game that can provide you with engrossing game play on the go. There are plenty of research topics, troop types, and upgrades to your cities that can keep you occupied, and with the ability to survey fields and craft gear, the deeper aspects of the gameplay are very rewarding. I’m not a fan of the free-to-play pay-to-win model especially when the wait time on the highest levels can span days but it is still possible to enjoy this game at your own pace. So if you enjoy the Hobbit: Kingdoms of Middle-Earth or you want a taste of a good strategy game on the go I recommend Kingdoms of Camelot Battle For The North.