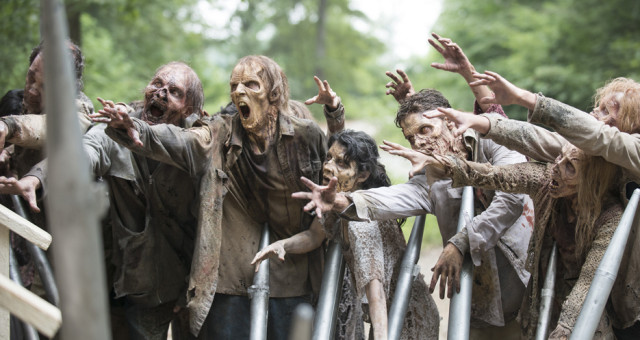 The Walking Dead: Coda is the midseason finale and has the crew coming face to face with the group responsible for taking Beth. It opens up with Lamsom fleeing down the street after knocking Sasha, and he’s looking for a way to get free of the zip tie on his wrists. He doesn’t get far before he’s pursued by Rick in a patrol car who is telling him to stop running. Lamsom doesn’t listen so Rick speeds up and hits him with the car, leaving Lamsom incapacitated. Rick tells him that all he had to do was stop running, and couldn’t care less about Lamsom’s words at this point. Rick shoots him with extreme prejudice so he wouldn’t turn, and that’s one less prisoner they have to make an exchange. Meanwhile, Gabriel still refuses to learn how to defend himself and has instead chosen to make a run for it to fend for himself despite his foot still hurting. He becomes distracted by a school full of walkers, and as luck would have it, the walkers break through the barricades and start to pursue him. With no where else to go, Gabriel runs back to the church but it’s barricaded and neither Carl or Michonne are aware that he left. However they realize it’s him yelling to get back in and they have to destroy all the work they did to protect the church in order to let him back in. The church is soon overrun and they have to escape through one of the hidden hatches in order to get out. But they don’t continue to run due to Gabriel’s injury and instead decide to attempt to board up the church again to keep the walkers inside. How long can they hold out with this makeshift barricade before they’re vulnerable once again? Or will Rick and the others be able to make the exchange in time to get back to save them? 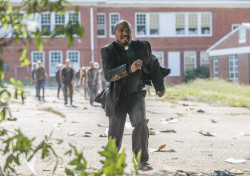 Even though this has been one of the most exciting seasons to me in terms of story progression and action, I’ve felt that the hospital storyline has been a mixed bag. It has felt disjointed from every other storyline and hasn’t been as compelling as the other storylines as a result. Noah escaping and meeting up with the crew did make the story feel more interesting because it had a better context. Case in point, the start of this episode with Rick running down Lamsom and shooting him with extreme prejudice shows the evolution of characters from the start of the series. And it also shows a contrast between Rick’s group and the group in the hospital holding Beth and others. What was holding the former group together was indeed to increase the chances for survival but more than that a sense of family and caring, so these were the main factors in doing so much to rescue Beth. And in the hospital Dawn was holding on to power and the group with the belief that the worst things they did such as rape, kidnapping and murder were justified because it held up the system they had in place. This would be touched on while Beth was cleaning up Dawn’s office when they were discussing leadership and the more recent events that took place there. So I could enjoy the hospital story line a little bit more in the context of serving as a contrast, and offering commentary on surviving in a zombie apocalypse and the choices made. And that’s because I still couldn’t get into any of the remaining characters in the hospital, and aside from Dawn, I could only think of them as “police officer 1” and “police officer 2.” It’s not that the acting performances weren’t good either but the storyline feeling disconnected. The story would progress and there would be an initial standoff between both sides to discuss the terms of the hostage exchange, and it was pretty intense. 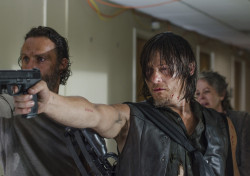 The lead up to the hostage exchange wouldn’t be the only story development this episode as the fallout from Eugene’s lie about Washington D.C. would carry over. Glenn, Maggie and the others would return to the church just in time to help Michonne, Carl and Gabriel with the walkers. So their reaction to the news about D.C. would be more tempered than Abraham’s reaction because they weren’t as invested in it as he was. So their reactions expressed disappointment in terms of this long nightmare not being over but they were happier to be reunited and to see everyone okay. Michonne would tell Maggie that Beth was still alive and the others were going to rescue her. This part felt a little off because Maggie’s reaction to this news was deep but it made her utter lack of concern or mention of Beth prior to this a little disconcerting. Now it’s easy to think that it’s because she didn’t want to have hope about this but it just made it more noticeable how they’ve almost existed in separate worlds for some time in this series. And with the group together and the church no longer a safe place for them to stay, they would choose to attempt to back up the others in Beth’s rescue as much as they could. I didn’t know how Gabriel would attempt to do considering his tendency to be bumbling and surrounded by a group of walkers all the time. 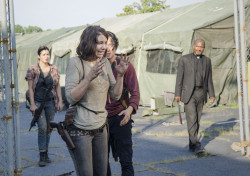 There was action throughout this episode but not on the same level as the most action-packed episodes this season. And as a mid-season finale the action neither resolved prior conflicts built up throughout the season nor did it create the potential for new story lines. At least, throughout most of this episode. The church would no longer be a viable place to stay so the earlier walker invasion clearly changed their current situation but to what extent remains to be seen. Now, the climax, the hostage exchange, would have permanent repercussions and was pretty shocking. At this point I’m sure there are spoilers everywhere but I’ll still only say that a regular character does die. But another familiar character is re-introduced so the changing dynamics have me pretty excited for the second half of the season, and I can only imagine what’s ahead.

The Walking Dead: Coda successfully closes out all the storylines from the first half of the season while laying the groundwork for a potentially more exciting second half of the season, and that’s saying a lot. Despite not really feeling the hospital story line as much as the others the past few episodes, a better job was done in tying it together to make it feel more meaningful in the big scheme of things with the surprise character development. And the lead up to the hostage exchange was intense and pretty engrossing because it was clear that the group couldn’t be more serious in getting Beth back, and more capable of handling these situations. And the climax was shocking, heart wrenching, and drastically changes things going forward. This was one of the better first half of a season in this series, and I expect nothing less for the second half.