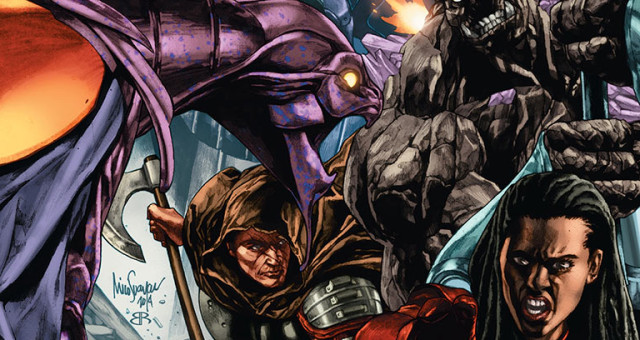 Unity #9 continues with the team reeling from the brutal arrival of the armor hunters while grappling with their own humanity in light of the recent events. One such member is Livewire, who recounts a battle the team had with Dr. Silk, and his words stating she wasn’t human due to the fact that she wasn’t affected by his virus has her doubting herself. Events have been occurring so fast that she never had the time to truly examine that statement but she wonders if she’s really part of an alien race called the Vine, which arrived on Earth thousands of years ago. But the revelation that X-O Manowar’s armor has been spreading a virus to all those who’ve been in contact with it only makes things more complication because she wore the armor as well, and felt a connection with it. So if she is human then most likely she’s been infected by the armor, and if she isn’t then it’s just another problem for her. Others don’t have the opportunity to deal with an existential crisis considering the hounds unleashed by the armor hunter are tearing up London, and Ninjak and Gilad have the unfortunate task of taking them on. But with the team’s forces spread thin, how can they hope to contend with the onslaught from the armor hunters?

I’ve been thoroughly enjoying the Armor Hunters event and it has lived up to all the hype. And I enjoyed the last Unity issue although I was hoping to see more Bloodshot. However since it appears he’ll play a large role in Armor Hunters #3 I wasn’t sure what to expect this issue but the assumption was the focus would be on the other characters on the team. And the opening with Livewire questioning her own humanity was an excellent touch as the introspection would serve as a supplement to all the activities taking place, and for me it was great to learn about her backstory. The same would apply to Gilad and Ninjak in terms of Gilad having flashes of a battle against a Siren, and how he defeated it, and how to use that understanding to attack the beasts unleashed by the armor hunters. So Ninjak would have flashes that would serve a similar purpose and the action would start after that. Seeing as how this isn’t the main series for the event it’s to be expected that their actions wouldn’t have a significant impact on the main villains. However considering they only face two beasts who don’t pose a significant threat to them, it’s an enjoyable action sequence with some impressive artwork but in the overall context of the event it might seem underwhelming. What this issue accomplished for me was giving me a greater appreciation of the characters on the team as I was able to understand each character better and what they bring to the table. To see how deeply this questioned penetrated Livewire’s psyche and the character she related to as a result had a strong impact, and I love how the characters are so well-developed. So this issue was more appealing to me as one who’s interested in the team going forward as opposed to feeling satisfying as an entry in the Armor Hunters event, and I’m not mad about that.

Unity #9 doesn’t truly feel like a significant entry in the Armor Hunters event but the character development and relatively enjoyable action sequence make this an enjoyable issue. Livewire’s introspection gave great insight into the character and an interesting way to show the impact of the Armor Hunters outside of the battlefield on Earth’s forces.  The two beasts defeated in this issue paled in comparison to the overwhelming force of the Armor Hunters but they served their purpose in allowing Gilad and Ninjak to put their abilities on display. And I’m glad I can say I’m really enjoying this series.