The Wolf Among Us Episode 3: A Crooked Mile

The Wolf Among Us Episode 3: A Crooked Mile continues with Bigby struggling to come to terms with the truth uncovered about Crane and his extracurricular activities. He’s infuriated about the illicit pictures of Crane with the fake Snow White and he believes the real one is in danger because Crane might be the killer. Beauty does her best to try to calm him down while Beast tries to figure out what’s going on from the two of them. When they tell him, Beast informs them that he overheard at the Trip Trap bar that they’re all heading to Lily’s funeral, and that’s where Bigby decides to go next. Beauty stops him before he leaves and tells him privately that there are things Snow White doesn’t talk about, and that the way he felt when he saw the pic she’ll only feel much worse. Bigby arrives at the funeral in time and sees that Snow White is unharmed but waits until the others pay their respects before interrupting. He tells Snow about Cranes activities and how he was having sex regularly with Lily while she was glamoured as Snow, and it shakes her to the core. They’re not sure if he’s the one killing the prostitutes but before they can go investigate they’re stopped by the Tweedle brothers who give them a message that Crane is not to be touched because he’s important to their employer. The Tweedle brothers picked the wrong time to give this message as they’re overwhelmed due to sheer numbers but ultimately this just creates more confusion for Bigby and Snow. And things only get worse when they get back to the office and realize Crane not only smashed the Magic Mirror but took one of the broken shards so they can’t use it to track him. Without any leads and the mention of a mysterious character only muddling the picture further, can Snow and Bigby get to the bottom of these events tearing Fabletown apart? And can Crane really be the killer?

One thing that A Wolf Among Us definitely has going for it is an extremely engrossing story complete with fascinating characters. It’s because of this that the interactive storytelling in the form of selecting answers during conversations could feel so gripping. And I’ve had a slight issue with the other episodes regarding the speed of the timer when selecting answers, and this episode tweaks that slightly but not by giving more time. In an attempt to make conversations more dynamic you can interrupt them at any point but only while the timer still moves. This works for the most part but there were a few occasions where the timer would expire before the person would stop talking, so the art of listening isn’t encouraged in Fabletown all the time. However it does succeed in making the situations feel more intense and realistic so I applaud the step in the right direction despite the unforgiving nature of a couple of situations where you have to digest information and make irreversible decisions about things that aren’t familiar. The controls are pretty much the same, and I played on my iPad again so swiping and tapping on the screen were responsive for the majority of the game. The situations where these QTEs were required were interesting and added to the overall immersive experience as the force it took to repeatedly tap could truly feel like the struggle on the screen. Unfortunately the most intense QTE moment during the game, which was at the end (no spoilers), was frustratingly unresponsive in terms of the swipes and initially I wasn’t sure if it was my iPad screen or the sequence being too taxing. Ultimately I discovered it was mostly due to the game. I was still able to succeed in this sequence but I wonder how things would’ve played out otherwise.

The choices in this episode range from the tone in which you respond during interactions to the order of locations you can choose to investigate due to having no leads regarding Crane’s whereabouts. This gives a truer feeling that you’re conducting an investigation and not just going through the motions of what’s laid out in front of you. And so the characters who have been present since the first episode are given more depth while new characters are introduced adding immediately to the story. I really enjoyed Bigby and Snow working together and how their relationship would grow. Before the first episode was released, Telltale Games talked about how the decisions made would impact Bigby’s nature at the end of the season but it’s been remarkable to see how much the two complement each other regardless of the decisions made. And if you’re already familiar with the Fables comic book then this is something you can appreciate even more. And so the story deepens with the influx of characters, and even though you could claim Crane is the killer, the twists are intriguing as you start to understand more about Fabletown and its residents. Whether it’s one fable asking in her grief if you really care about those seemingly forgotten by the system or hearing the desperation in another fable’s voice as you make the crucial decision regarding her livelihood, you’ll be drawn into this world as its doors open up in a magnificent way unlike the previous episodes. And you’ll begin to understand that the conspiracy connected to the murders is only taking advantage of the deficiencies in the system, and manipulating those who are already victims. So your choices are far from black and white. 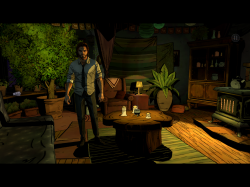 Yes, the story deepens in a wonderful way but the trade-off is in the action sequences or rather the lack of action sequences as the story unfolds. There are some straightforward puzzles to solve so you’re not just listening to people talk. But for the action that’s lacking during the episode it’s more than made up for at the end with the most intense action sequence so far in the series. This was the one that had some technical problems on the iPad but the transformations of characters was more impressive than I would’ve imagined, and a memorable epic battle. I don’t want to hint at what may lie ahead for Snow and Bigby by giving away anything from this sequence but I’m more than curious to see how they will deal with the revelations at the end of this episode.

The Wolf Among Us Episode 3: A Crooked Mile is a very satisfying episode as the twists in the story explores the depths of Fabletown revealing a conspiracy that could destroy its foundations. It’s very easy to become immersed in this episode as the character development is exceptional, and not just for those who’ve appeared in previous episodes either since the reality of Fabletown hits home as motivations become clearer. And despite the technical problems I had with the action sequence at the end of this episode, it was still the most intense and enjoyable one throughout the series. I wondered how Fables would translate into a video game, and whether or not it could be engrossing if that video game was a prequel but the Wolf Among Us has pushed the boundaries of interactive storytelling and moved the genre forward tremendously. And as a result it has been an addictive, and engaging series.