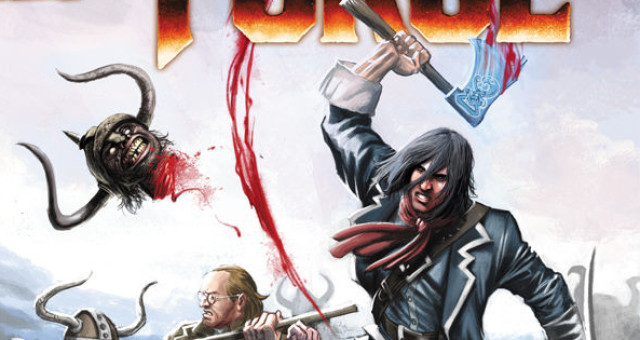 The Order of the Forge #1

The Order of the Forge #1 is a new series written by Victor Gischler and published by Dark Horse Comics about George Washington using mystical powers, and an axe, to stop a madman seeking to form an empire. It opens up with George being questioned by his father about his whereabouts, and then receiving a lecture about his activities since he was seen with a milkmaid and not buys making connections with more prominent families. His father then proceeds to remind him about the cherry tree in their yard and what it symbolizes, and apparently this was one time too many as George storms out and takes an axe to the cherry tree. He’s so enthusiastic about chopping down this tree that the axe flies out his hands into the woods. When George finds it, it’s lodged into a strange totem pole. When he attempts to pull it out the totem pole he’s infused with a mystical energy not knowing what the spirits in the totem pole want. Frightened, he flees to Philadelphia where he becomes a servant to make a living. However, he can no longer tell a lie. Even though it’s been six months since the last incident, things will never be the same for George Washington. 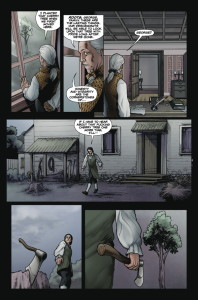 When I saw this issue’s cover and read the series’ synopsis, they conjured fond memories of Abraham Lincoln: Vampire Hunter. So I was curious about how George Washington’s life would be altered to show him as an axe wielding man with mystical powers, and I didn’t just want a clone of that novel and movie. So it was hysterical when a young George stormed out in the middle of his father’s lecture in a shocking manner ready to take an axe to the mythical cherry tree. And this sequence would set the tone of this issue. However what made it an enjoyable read wasn’t just how it put famous characters in raw situations but the creativity in adjusting well-known tales to start building an intriguing story. This mystical totem making George incapable of telling a lie created an interesting situation in terms of how he had to interact with various characters, resulting in some fresh character development. And there was an interesting story that would have the antagonist, Lord Hammond, involved in an impressive scheme to acquire a secret weapon and as a result more power. So the set up for this story has so much potential and I’m looking forward to seeing how things unfold. There would be plenty of action (and blood) this issue too with George wielding the axe with immense skill. Even though it was entertaining it wasn’t completely gratuitious as it would also advance the story leading to an exciting conclusion. I was impressed with this issue, and aside from simple things like an antagonist leaving the door to an all-important room unlocked, everything was pretty solid. And it didn’t feel like a clone to Abraham Lincoln: Vampire Hunter or any other. Another issue as good as this and I just might get hooked to this series.

The Order of the Forge #1 is an impressive, and at times humorous, start to the series complete with action, character development and story progression. The pace is just right, and the story build up has me intrigued about the antagonist’s goals as well as the true nature and extent of George Washington’s powers. It has nudity and curses so if that’s offensive to you just be mindful of that. So I’m hoping that what unfolds next issue is as enjoyable as this issue.