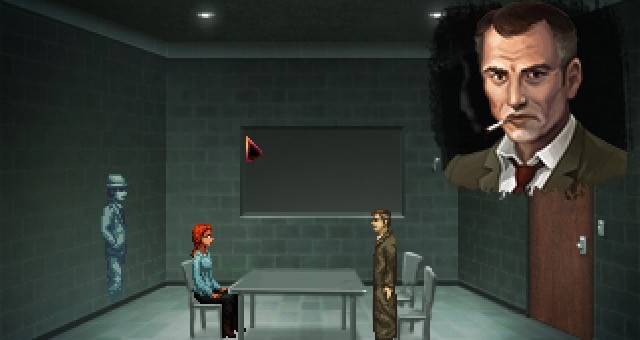 The Blackwell Epiphany is the fifth and final entry in the Blackwell adventure game series developed by Wadjet Eye Games featuring Rosa Blackwell and her ghostly companion Joey as they face a threat unlike any other, and turns their understanding of the connection between spirit medium and guide upside down. It opens up with Rosa and Joey standing in the freezing cold waiting for Detective Sam Durkin in front of a dilapidated building. But instead of showing up, Durkin calls Rosa and tells her he can’t make it and that she should have a look around to see if there’s anything unusual. Following the events of the Blackwell Deception the two of them have an arrangement that is mutually beneficial and Durkin knows she has some special abilities but they don’t ever get into details. And sure enough there’s a ghost in the building, a former actor who doesn’t know she’s dead or that the building was abandoned following a drug raid. So of course Rosa and Joey help her move on to the next phase, and Rosa is more capable with her powers than ever before. However this victory is short-lived as there’s a man waiting with a gun when Rosa and Joey leave the building but they’re not the target as he shoots a man coming out from the shadows behind them and runs away. The man who was shot immediately turns into a ghost and is distraught as he rambles about being too late, needing the bestower, and Grace isn’t safe. Even when the two of them try to comfort the man and let him know they can help him he’s still distraught and says it’s too late and “they” will find him, and Rosa and Joey’s confusion changes to horror as they watch this man’s spirit get ripped in half and disappear right in front of them. And when this murder isn’t reported on any news outlets Rosa goes to see Detective Durkin to get some answers, especially considering she was only at that building because of him. Has the hidden organization that was revealed in the last episode finally caught up with Rosa, the bestower, and if so, who can she trust, if anyone? 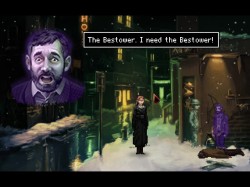 I’ve been looking forward to the conclusion of the series with this episode and this one got off to a bang, slight pun intended. The stakes were raised drastically the last episode with the revelation there was a hidden organization involved in the events that took place, and there were also those out there with considerable powers  where Rosa could be mind-controlled and trap Joey as commanded. So this scene with the man getting shot in front of them only to have his spirit destroyed was very intense and set the stage in an amazing way. I felt immediately engrossed in the mystery and felt just as horrified as Joey and Rosa did watching this but I was also excited to be searching for the answers. And the fact that the personal touch and social commentary would still be there, as evidenced by the first ghost that Rosa and Joey encountered, I was immensely intrigued by what was ahead. The game mechanics are mostly same as the last entry in the series with the left-click being used to interact with objects and the right-click to look at objects, and you still have the ability to switch between Rosa and Joey at will, which is crucial to solving every puzzle. Joey still has his gust of wind and tie in his inventory, and Rosa still has her phone, which is slightly more functional with the addition of clickable links in information she finds or downloads from an external device. Since Joey can’t physically interact with anything I wonder if making the left-click button for him just look at objects by default would have improved functionality just slightly since there were many occasions I clicked out of habit wanting to just view only to be met with one of Joey’s enjoyable quips. There is one addition and that’s the ability to call either Joey or Rosa to you, depending on which character you’re using, when they’re on separate screens and this helps considering many puzzles require them to be on different screens and this saves time. There were a few puzzles that had the same solution but the majority were very interesting including one that required the use of an MMO. 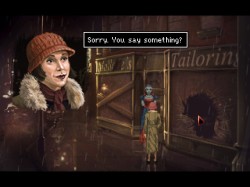 As I noted in my last review, there were many questions that were still unanswered such as Joey’s past and connection to the Blackwell family, and one sweet addition this time was being able to play as Jocelyn and Madeline, another spirit guide and host. So immediately following Joey and Rosa’s encounter with the man outside the building the story jumps to decades prior and follows them for a brief sequence. And their relationship and behavior are completely different from Rosa and Joey’s, and this includes breaking and entering, which results in them stumbling on a recent crime scene and that explains the place being boarded up. Apparently the place was shot up and considering the number of bullet holes in the counter it was safe to assume the one at the cash register met  a poor end. And when they ring the buzzer the one who answers is Joey as a ghost. So the story wasn’t letting up and at the very beginning there were so many exciting story threads I had my hopes up very high as the story switched back and forth. Unfortunately the additional set of playable characters was only for a couple of brief sequences and even though Joey’s past was revealed in connection with the events from Blackwell Deception, there were still a couple of questions I felt were somewhat glossed over. That doesn’t mean the answers were a letdown, it’s just they took a backseat to some of the elements introduced in the last episode. And this time around Rosa and Joey didn’t have to seek out a case since one came to them and the story here gets deeper as it leads to a mysterious group called the Grace Group whose members are all in danger from a hidden force. And if you enjoyed solving ghost cases in the previous entries there are plenty of ghosts this time around and the stories are as interesting, if not more, than the other episodes due to the connections and overarching story. And where the last episode, and the start of this episode, hinted at Rosa receiving more help outside of Joey this was indeed the case to an extent and of course to stay spoiler free, some characters just seemingly vanished out of convenience and a few story threads along with them. Yes it helped advance the story and a great job is done in maintaining the suspense but I have to admit I was left wondering what happened. 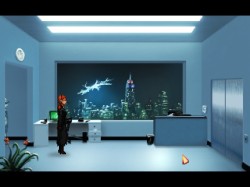 Despite this the story does succeed in bringing things full circle in just about every way with some things being more significant than others of course. And I can’t deny the emotional impact of the series of events that take place, which is a strong endorsement of the voice acting throughout, and I’m glad that instead of being told about certain things you can experience it for yourself while playing. And as one who has played every episode in the series I can truly say I’m satisfied with how the story was wrapped up, and make no mistake it is a definitive ending. So you won’t be left hanging and it’s just a matter of liking the choices made in completing the story. A couple of things regarding the overall premise of the series is left unanswered but the more I think about it the more I prefer that over a convoluted answer and any disappointment regarding that is easily dwarfed by the overwhelming ending.

The Blackwell Epiphany is a solid and satisfying conclusion to an exciting series, and the bold decision to make it have a definitive ending makes it a memorable one. Everything comes full circle and in some ways more surprising than others, and I can’t say for sure if Dave Gilbert had it planned out that way from the start of the series but as a fan it feels good to at least be able to believe that based on the way everything turned out. The puzzles were logical and it was more of trying to figure out how to achieve what comes next as opposed to having no clue on what to do next so it was on par for the series. I didn’t encounter any technical issues except an update preventing me from using my saved games but that shouldn’t be an issue for new players. I highly recommend the Blackwell series because it’s an excellent example of why adventure games are still around, the potential inherent in the genre and why gamers love it, and why it will always have a large place in my gaming rotation as well as my heart.