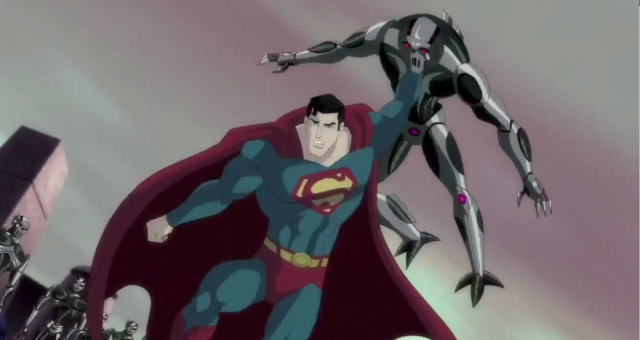 Superman Unbound is the latest movie from DC Universe Animated Movies and is loosely based on the 2008 storyline by Geoff John titled Superman: Brainiac. In this movie Superman has no prior experience with Brainiac or any of his drones at all. However his cousin, Kara aka Supergirl, has some prior experience with Brainiac as she was a young girl in the city of Kandor when Brainiac was unleashing his destruction on Krypton, their homeworld. That all seemed to be in the past for Supergirl as she and Clark are well established in Metropolis and living their respective lives. Kara is having more trouble adjusting than Clark seeing as he’s in a committed but secret relationship with Lois Lane (who else) who also knows his true identity. But Clark isn’t a playboy and his reason for wanting to keep his relationship with Lois a secret is to keep her out of harm’s way. And this is before he’s even aware of Brainiac’s existence and Kara has been running from the memory of Brainiac’s destruction of Krypton. Can the two of them defeat this threat when countless others have failed?

The movie starts off simple enough with a routine crime taking place that ends up with Lois involved but instead of Superman coming to the rescue it’s Supergirl. It was smart that the criminals checked the news to determine that Superman wouldn’t be able to get back in time since he was responding to an earthquake half way across the globe but it was dumb on their part to not be aware that there was another Kryptonian flying around Metropolis. This results in them being defeated by Supergirl but not before Superman returns just in time to correct the mistakes she makes in dealing with them. This sets the stage for a personal scene between Superman and Supergirl that would be indicative of the entire movie. Even though Clark is older on Earth, Kara was originally older but her ship went through the wormhole after his and she’s having a hard time adjusting on Earth because she remembers Krypton and her parents. Clark is understanding of this and wants Kara to relate to him more seeing as how they’re the only two Kryptonians left. Kara isn’t the only one that Superman is protective of  because he’s keeping his serious relationship with Lois quiet because he believes that’s what would keep her safe. It’s not that Lois wasn’t already in constant danger but her being targeted as a result if anyone found our Superman’s identity.

So it’s easy to understand with that mentality Superman’s actions after a Brainiac drone arrives on Earth and Supergirl tells him what it is. Superman decides to seek out Brainiac before it can find Earth and not just to protect the Earth but the woman he loves, Lois. And he does it alone because Supergirl still remembers the destruction inflicted by Brainiac when she was a young girl and doesn’t want to face him. This was a great premise and I was excited for the potential here and all that could be explored. And I pretty much buy every DC Universe Animated movie that is released so I had my hopes up high after All-Star Superman and Superman vs the Elite, which were two great animations in my opinion. So I wish I could say that Superman Unbound at best was more than just solid. Unfortunately I can’t.

As always, I won’t recap the entire movie, but once the Brainiac threat was revealed to Superman it felt like the movie never soared as high as it could have.  First, Superman rushing off to find and face a threat that was just described to him as one of the most dangerous in existence and not prepare more or even inform Lois of his whereabouts knowing he could face death seemed counter to the mentality just described. To me it felt like it lessened the Brainiac threat or at best set the stage for an encounter that would require Superman to raise the stakes since we know he holds back at times on Earth. I felt the former was true because even though Brainiac’s power was demonstrated on a level that would make Supergirl’s fear of him justified it just didn’t come off to me as very menacing in this movie compared to other movies and portrayals. Brainiac seemed to be nothing more than an army of robots and not sinister, conniving or even brilliant. I don’t know how much the voice acting could’ve enhanced that but even the sound effects didn’t help establish that feeling either (although John Noble as Brainiac was excellent, which makes me wish the dialogue was better at times).

It wasn’t all bad because there were some great action sequences in the various confrontations with Brainiac even though it seemed inconsistent at times in terms of the animation. The flashbacks showing Kandor and the interactions with other Kryptonians were well done for the most part and that’s when Brainiac’s cold cruelty and reasoning were shown the best. Out of all the animated movies I’ve seen this one had one of the most in-depth history of the events leading up to Krypton’s destruction. Supergirl’s eventual confidence to help fight Brainiac resulted in some good sequences as well. And the ending was well done too and very plausible in overcoming Brainiac.

Superman Unbound was a relatively solid animation but definitely not on the same level as All-Star Superman and Superman vs the Elite. The changes to the storyline from the comics this was based on didn’t pan out too well and took away from what was a great storyline. The portrayal of Brainiac due to the script made him seem less of a threat than other portrayals and even though some of the interactions between Superman and others were well done, the dialogue felt lacking at times. If you’re like me and you enjoy DC Universe Animated movies then I would say this is worth renting but wouldn’t recommend buying it. If you’re just looking for a really good animation movie and not the biggest fan of DC then I would suggest All-Star Superman or Superman vs the Elite for a good Superman movie.