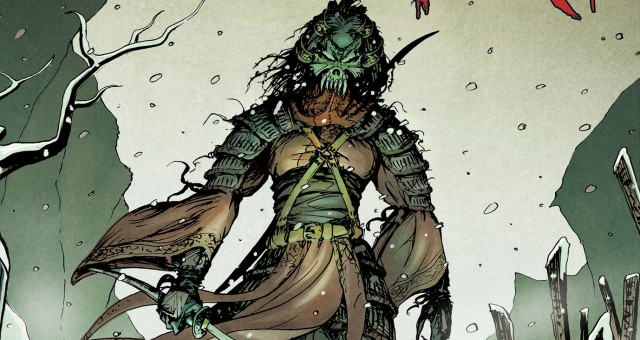 Samurai #3 continues with Shobei and Takeo dueling to decide the fate of the villagers of the Isle With No Name. It opens up during round 1 between the samurai, and the duel will consist of 3 rounds over 3 days with a timer for each round. They spend most of the round sizing each other up until Takeo strikes at Shobei, who is able to block the attack and ultimately land a counterattack before the timer expires. The first round goes to Shobei, and this fills Clan Nobunaga with even more arrogance and confident about their ability to win. Nobunaga wants to celebrate and demands his servants get the preparations together. Meanwhile, a young Masato approaches Shobei after the first round and begs to become his student. Shobei accepts to be his master and eventually train him if he proves himself.  Shobei locates Takeo and states that it was an honor to fight against him. But with Takeo down 1-0 from just one move, does he truly stand a chance against Shobei? 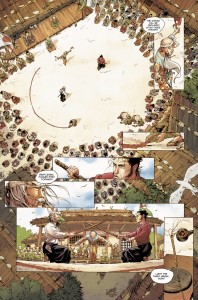 It’s a great thing when an issue is so good that it leaves you wanting more just because the experience was so immersive. That’s how I felt after reading the first 2 issues of Samurai because of the wonderful way the story and characters were built up. I did wonder after the first issue how much could be covered in this miniseries but I was still amazed at how much actually unfolded and the way the story was being brought together. Samurai #3 leaves me wanting more but mostly because a lot of the story was left unresolved. Now don’t get me wrong, I still love the world and characters of Samurai and of course I’m looking forward to reading more, however it was slightly disappointing that so much was left on the table at this critical juncture. Aside from that there were many things to enjoy about this issue and the world was still fascinating.

I was pleased that the first page showed Takeo and Shobei facing off immediately, and I felt like I was right there at the duel. To see two master samurai sizing each other up and seeking to exploit any opening was pretty tense. Part of this feeling was due to the overall immersive experience where every panel was compelling, urging closer inspection in order to gain insight about the battle. I wasn’t surprised that Takeo lost the first round but about the way he was dominated, which opened the door potentially to more interesting character developments. And sure enough the following actions from all the characters reflected this fact.

Clan Nobunaga has felt somewhat generic to this point even including their leader’s vile actions. This issue added a slight wrinkle to that dynamic with some of the members expressing frustration with the way Nobunaga treated them. However, they were all just as revolting as he and this became extremely clear to Shobei. Terumi, Nobunaga’s prisoner and sex slave, would play a crucial role in the events that unfolded and I won’t give away any spoilers. This entire sequence would ultimately make round 2 more interesting, and throw the remaining story for a loop. Yet, it was what was revealed about Takeo’s family history or rather wasn’t revealed that added to the feeling of being so close to answers yet so far.

Round 2 was even more intriguing than round 1. And it was good to see flashes of Takeo’s past, which added to the earlier character development. And round 2’s result only made round 3 more interesting. I don’t know how that will tie into Nobunaga’s situation. However, the twists have added more substance to the story so far that I have confidence in the remaining events being more than just a simple duel. So I can’t wait to see what happens next.

Samurai #3 adds more wrinkles to the story with its developments from the duel and within Clan Nobunaga setting up some intense cliffhangers. There’s still no progress regarding Takeo and his brother, and aside from the training flashbacks there’s no further insight in this issue. Shobei’s character is still fascinating and among all of them he remains the wildcard. And with so much left on the table with unexpected developments, I’m hoping next issue addresses them more thoroughly.