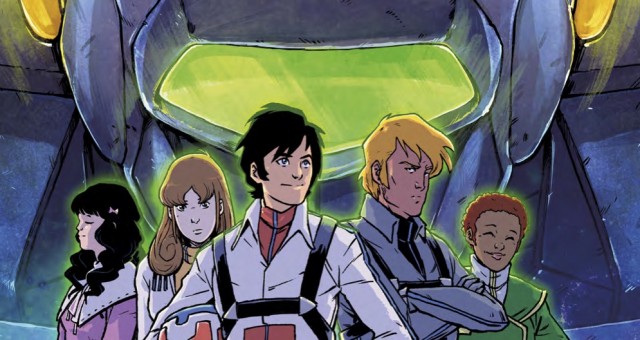 Robotech #1 is the start of a new ongoing series published by Titan Comics and based on the classic anime. This issue opens up 10 years in the past when a mysterious ship from outer space crash lands on Macross Island. The military is already on top of it with everything on the island being declared classified immediately. They believe the technology is a “boon for the goddamn ages.” One of the soldiers is Roy Fokker, who is told that if everything pans out they’ll be able to write their own future.

Fast forward to the present, and the entire island is built up beautifully. Life revolves around the highly-secretive Robotech Project. The Robotech Project has been able to make incredible strides with the alien technology. And there hasn’t been any major problems on the island to date. The only “invasion” they’ve had to deal with was courtesy of Roy’s younger brother, Rick Hunter. But everything changes when unknown ships enter Earth’s orbit and begin attacking Macross City. Who are these invaders and what could they want with Robotech. 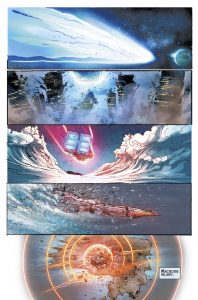 When I first saw that there would be a new Robotech series I was eager to read it. I remember watching the TV series growing up but other than the sheer excitement I had I couldn’t remember much else. This issue elicited a similar reaction but more so for the potential than the events. The opening sequence superbly laid the groundwork for the Robotech Project. So I appreciated the fact that even though it jumped 10 years in the future there was still much to learn about the technology. And I didn’t mind that this wouldn’t just be done by staff present from the beginning but also a newcomer, Rick.

The characters were intriguing from their introductions and the initial situations they were placed in. Whether it was the personal interactions or their responsibilities on base, the story was teeming with potential. And I did want to know more about life in Macross City so I’m looking forward to that throughout the series. However, the story would lean more towards Rick Hunter. He didn’t come off as a bad character. But since he was an outsider his actions couldn’t shed any light on what’s been taking place the past 10 years. And it didn’t take long for the action to start. 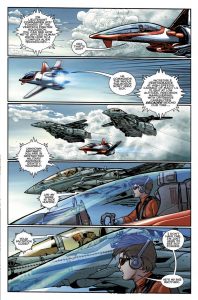 Clearly, the biggest draw about a Robotech series would be the Mecha. So when the action started I was anxious to see them in action. Or at least the first transformation. The action overall wasn’t disappointing. The sheer scale of the situation was clear due to the impact on the civilian population. I was engrossed in these events. I was, however, surprised at how the iconic transformation was treated the first time. Good thing it was still enjoyable.

Robotech #1 is a solid start for the series balancing action, character development and an entertaining story. The story fast forwards to the right point so even though the Robotech Project has been in place for years there’s still a lot more to learn about it and the characters. The action is exciting, although the adrenaline filled transformation moment is slightly squandered here. However, I am satisfied with the start of the series and I’m looking forward to more.