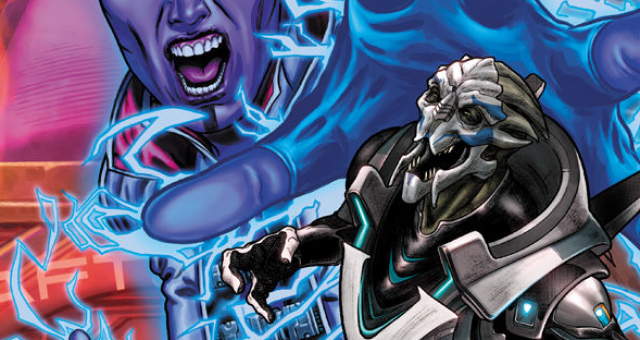 Mass Effect Discovery #3 continues with Tiran disobeying the hierarchy and continuing his mission with the Andromeda Initiative. The hierarchy has concerns about Tiran’s mission and question its worth. Tiran tells the admiral that he can’t give up now. He intends to see the mission through and if the admiral needs to declare him rogue then Tiran is willing to take the heat for it. So far, Tiran has attracted a lot of attention with very little results. There are still no answers about the Initiative’s motives or plans. And their biggest concern is Agent Zeta, the powerful Salarian.

Agent Zeta was once known as Olan Kooth. He was a child prodigy with rare biotic abilities. The Salarian Special Tasks Group saw his potential him and pushed him beyond his limits. However, the military grade implants weren’t enough to satisfy his thirst for more power. So he began to experiment on himself. Eventually he became too much of a loose cannon for the Salarians and was disowned. Now he does freelance work. Why is Agent Zeta pursuing Shio’leth. And can Tiran and Luna stop him? 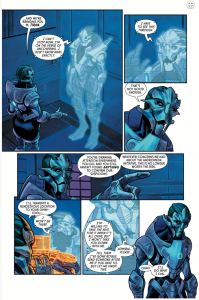 I was optimistic about this series after the first issue. The story and characters were intriguing and certain aspects of it all seemed clear. The second issue felt like the story was being stalled. And there was a point during this issue where I felt like the series was struggling to find an identity. And at best, it felt like, “well play the game to know more about the character.” Things became a little better once it became clearer that this was mainly about Tiran’s introspection and not the hunt for Shio’leth. However, the race to find Shio’leth felt more like a throwaway story line than ever. So even though the issue was a fun read, it was no where as engrossing as it could have been.

It was good to finally see a backstory for Agent Zeta. This was necessary because prior to this Agent Zeta had zero character depth. There was no motive for his actions, nothing revealed about his thoughts. Even though this was backstory was entertaining, this was the only insight given into his character. His action sequences were still enjoyable but mostly for the awesome display of biotic powers. What was at stake still wasn’t clear. Once again Gabriel Guzman’s artwork was the real star. 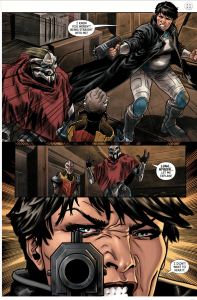 The story did move forward with the focus shifting to Tiran’s deciding whether or not to truly join the Initiative. New/familiar characters were introduced as the story progressed. It was good to see a specific character make a cameo here. But again, the problem was the story wasn’t progressing in a way that felt rewarding this far along in the series. The new characters were introduced for Tiran’s character development but nothing revealed about the Andromeda Initiative could explain why it was so compelling for him. Maybe he was just a soldier who couldn’t abandon a mission. Either way, his conversation with his cousin Nyreen made me see even more how much potential his character had but it was mostly squandered.

Mass Effect Discovery #3 still feels like a series that’s trying to establish an identity. And considering there’s only one issue left that’s not a good thing. It is entertaining in ways such as the introduction of additional characters and the action sequence. I just feel like at this point the series should have focused more on Tiran’s journey than the chase for something that is still a complete mystery.