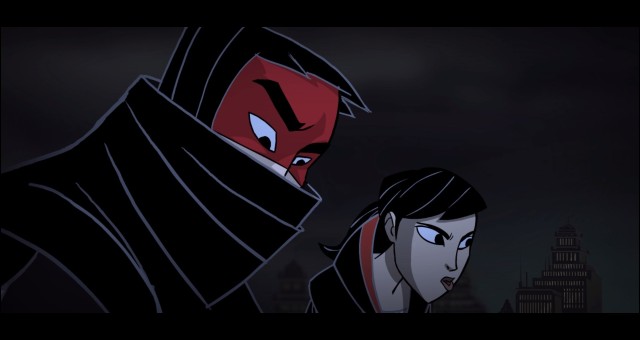 Mark of the Ninja

Mark of the Ninja is a side-scrolling stealth action game developed by Klei Entertainment about the story of a ninja who risks everything to protect his clan. It opens up with the nameless ninja waking up to the sound of gunfire and a bell ringing in his clan’s dojo because it’s under attack by a heavily armed force using modern technology to take the other ninjas out. He’s not alone as a female ninja, Ora, is by his side and helping him get out of danger in order to figure out what’s going on and acquire his equipment to take on the intruders. After the two make their way towards the center of it all they see their sensei, Azai, being attacked for allegedly stealing from the intruders. When the remaining attackers are defeated Azai issues a dire warning to the remaining ninjas; their enemies have found them after centuries of searching. And so it’s necessary to attack the base of the intruders and take them out in order to be fully safe from these enemies. And the nameless ninja is already infused with extra strength from an irezumi tattoo and is now called upon to lead this assault, and to do so he’ll need to be marked with more of this ink to receive even more power. But there’s a high price as this ink eventually drives one mad and so to prevent a ninja from becoming like one who went mad and became an extremely powerful tyrant in the past, it’s required that a ninja who receives an extensive amount of this ink to commit seppuku after completing his mission and end his life. Can the nameless ninja defeat those who threaten the dojo before the inevitable madness caused by the ink takes hold or was his fate sealed the moment the ink touched his skin?

Now I’ve always had an affinity for ninjas for as long as I can remember and so it was a no-brainer for me to give this a try. And the graphics are elegant yet simple, perfectly in line with the noir visual style as the shadows are not only your allies but essential to your survival. Mark of the Ninja makes it very clear from the beginning that you might be a ninja but your enemies still have guns, and powerful ones at that. So the first gameplay mechanics you’re shown are how to use your environment to your advantage and move around especially considering you don’t have all your weapons. Obviously you’re visible in light but you can use hiding spots in the area to conceal yourself and not just the shadows. Your movements are what you would expect from a ninja as you have to be mindful of the sounds you make in the area so you don’t alert any enemies, and so you can climb on walls, ceilings and use your grappling hook to move quickly from one location to another. All of your movements by default cause no sound unless you run and you’re shown clearly the area in which that sound can be heard. This can be used to your advantage as you can distract enemies with sound with various objects in the environment or in your arsenal. The controls are simple and smooth so you won’t have any issues with making moves and worrying about response times or glitches and it’s very easy to get the hang of them.

Now it wouldn’t be a game about ninjas if you weren’t also a deadly assassin and this is where the gameplay is really fun. The game rewards you for the type of kills you perform so if you just jump into battle and somehow survive you won’t receive a lot of points for that. You’re rewarded for stealth and given the tools necessary to handle every situation that way. You have an unlimited number of darts you can use to destroy light fixtures (which makes sound) to create more shadows or to keep enemies distracted while you take them down. Depending on your location relative to your enemy there’s a quick animation that requires you to perform a 2 button combo to get a quick, silent kill. If you miss you’ll perform a noisy kill and enemies in the area can be alerted from the sounds of a an enemy gargling as his gasps for air are futile. And since you’ll be required to plan your moves in every area to some extent, you’re given an advantage with precision aiming as the action is frozen for you while you pick the targets you want to aim at, which can even include deciding where to grapple in mid-air.

This was extremely enjoyable as I was very impressed at how well stealth was incorporated into every action to give one the feeling of being a ninja. As you infiltrate the enemy’s bases to locate all of those responsible for the attack on the dojo you’ll prefer this method as opposed to being able to go gung-ho. The gameplay mechanics were engrossing. The levels were designed very well so the actions didn’t feel repetitious for the most part as you could approach situations in different ways and attack from different angles. Or you could go an entire level without killing anyone. And I say for the most part because there was a slight point where it did feel repetitive but thankfully the enemies started to change and upgrades became better.

There are different challenges and optional objectives that you can compete to earn more points in an area, and in turn you can use those points to unlock different upgrades, weapons, and even outfits, which have their own benefits. This helps you deal with the tougher enemies you’ll face as some times it’s advantageous to strike fear into one enemy and have them take out a few others due to fear. Other enemies can only be killed after being stunned. Some enemies you have to avoid all together. And throw in a watch dogs and thunderstorms, which reveal your location outside when lightning strikes and it’s very challenging, but enjoyable. After a certain point in the story, you even unlock new abilities when you receive more ink, but you’ll either have to sacrifice using distraction items or some other benefit. One of these abilities, Mark of Serenity, allows you to vanish into thin air and reappear in another location of your choosing, was one of my favorites but while in that outfit no distraction items can be used. These different abilities made the gameplay feel very fresh and despite stealth still being vital, you truly feel as if the additional ink has made the ninja more powerful. The rush you get from taking out an enemy and dropping the body from on high in front of another having a smoke and watching him be filled with fear as he takes out 2 others has to be experienced. And when the enemies become more infused with modern technology the stakes are high as you have to be extra careful in doing your best not to lose the upper hand.

But again, there’s a price as the madness kicks later in the story line. And the story is one of the other strengths of Mark of the Ninja. At first it starts off as the standard get revenge on the enemy for attacking the dojo story, but as you progress it becomes about the relationship between the nameless ninja and his female helper, Ora, the curse of the mark, and what it truly means to acquire power at the cost of losing one’s mind. As always, this will remain spoiler-free but an excellent job was done in weaving a story where you ultimately feel invested in deciding the fate of this nameless ninja who would’ve sacrificed everything in saving the dojo.

The Mark of the Ninja is an incredible side-scroller that blends its gameplay mechanics perfectly with its level designs and captivating visual style to create a stealth experience that remains true and enjoyable throughout. The freedom to approach situations in different ways was surprising and the replayability value is high as it becomes necessary to handle these situations as stealthily as possible to unlock upgrades. The upgrades make the gameplay feel fresh just in time and fits with the story, which takes you on a thrilling ride of acquiring power and then seeing the devastating cost of it. If you’re a ninja, an aspiring ninja, or just want to play as a ninja and have a good time, I highly recommend Mark of the Ninja