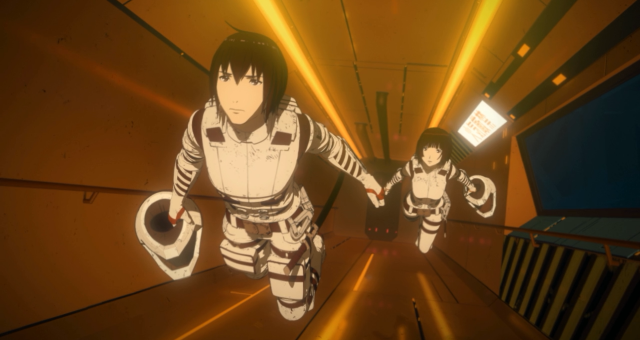 The Knights of Sidonia episodes 4 through 6 sees the Gauna threat raised exponentially after not being encountered by humanity in 100 years. Following the Gauna’s shocking slaughter of the entire elite strike team, command on Sidonia is scrambling to counter the Gauna’s advance on the flagship. They shoot a missile at the Gauna hoping it makes an impact to at least slow it down or get it to change its trajectory but the Gauna surprises everyone again by adjusting and evading it. Since it’s still on a collision course with Sidonia the captain has to take drastic action, and so she orders the thrusters to be set in order to change course at an alarming speed to avoid the Gauna but the risk is the loss of artificial gravity on the ship, which could result in a catastrophic death toll. She orders it anyway stating that if it’s not done then all of Sidonia would be destroyed, and the alarm is sounded for everyone to activate their gravity hooks to have a better chance of survival. As a result, they are able to successfully avoid the Gauna’s trajectory but not without losses. All of this was done due to encountering just one Gauna but there are many others out there so is it only a matter of time before what’s left of humanity is completely wiped out or is Tanikaze the hero that the captain believes he is and capable of leading the garde pilots?

Seeing the entire strike force get wiped out in such a fashion had me anxious to watch episode 4 and it didn’t disappoint. After giving a quick recap of the strike force’s defeat, it immediately went to the captain scrambling to save all of Sidonia by changing course. And this scene was pretty intense as the decision the captain had to make didn’t feel artificial, and the scenario captured and highlighted perfectly the precarious situation of humanity hanging by a thread. And it was pretty graphic as the death toll increased. This episode really brought home the impact of facing the Gauna’s devastating power after so long as well as still showing the personal impact of the loss of the strike team. However this episode wouldn’t just be about evading the Gauna as all pilots would be called to the hanger to launch another offensive. And when the Gardes are deployed the action is a thing of beauty to watch as the electrifying movements coupled with the reactions of the pilots and command make for the most entertaining battle in the series so far. I was fully engrossed in this battle, and there are many moments that had me reacting quite loudly. And a hero does emerge in more ways than one as a new era in the conflict with the Gauna begins, and more importantly, a new way of viewing and treating each other as the truth comes to light.

This episode wasn’t as action-packed as the last one but was heavy on character development as Tanikaze’s decision to pass the point of no return to find Hoshijiro set the stage for this. He brings her into his Garde since hers was destroyed in the battle but he’s out of Heigus particles so they’re both now stuck. And they have limited rations as well since he can’t photosynthesize like Hoshijiro can so he still needs to monitor his food and water intake. Their relationship grows as they share this time together and insight is given into Tanikaze’s grandfather and why Hoshijiro become a pilot. And of course the fact that he sees Hoshijiro photosynthesizing, a process that requires her to be completely nude, in front of him removes the barriers between them and creates an open situation where they connect on a very personal level. I enjoyed this moment and felt this situation with just the two of them was perfect in forging a stronger bond, giving the characters more depth, and making it so it was clear there was more to life on Sidonia than fighting the Gauna without digressing from the current situation. Hoshijiro even shares an interesting theory about the Gauna that could make them a lot more interesting. The history of humanity is also traced back to when the war first started detailing the number of ships that originally set out carrying all of humanity, and it gives context to everything that is currently going on including the immortal council. So what this episode lacked in action it more than made up for it in terms of laying out elements that makes this anime so engrossing on many levels.

This episode was in the difficult position of following 2 great episodes that either had intense action or strong character development, and since Tanikaze and Hoshijiro’s situation was resolved and the gauna destroyed, it would have to start a new plot thread. Of course it would deal with the aftermath of their return, which was 3 weeks after they were initially stranded, but it would also deal with the aftermath of the strike team being killed and Tanikaze being viewed as a hero. Tanikaze and Hoshijiro’s relationship would continue to grow but other characters would start to become more defined as well. Everyone wouldn’t be happy with Tanikaze’s newfound fame and that would include the immortal council, who are worried that if the public learns the truth about his identity it’ll cause a lot of new problems in society and they don’t want that. A governing body that is kept alive by others in society while not being shown providing any tangible value is cliché but the main focus here is on the mystery of Tanikaze, and it does make that more intriguing. There would be some answers given as he would encounter the Captain after this meeting and ask her questions regarding her treatment of him, and why she gave him so much even from the beginning. I was feeling this episode but despite more of Kunato’s backstory being shown and used as part of the reason he would despise Tanikaze more than anyone else, I still had a strong dislike for the character at this point. He seemed out of place as a character, and in a society that even created people who looked, alike his motivations and actions didn’t even have a context that made sense other than a cliché envious antagonist. An anti-war protestor would’ve made more sense considering that element was introduced from the beginning. Maybe when more is revealed about the society it’ll make more sense but for now it seems to be a distraction when exploring other aspects of Sidonia’s history is more interesting. However, the ending of this episode was pretty shocking and I have to wait until I see things unfold next episode to be sure how I feel about these developments. But overall this was a good episode.

Knights of Sidonia – Episodes 4-6 succeed in raising the stakes in the war with the Gauna while also providing some solid character development, creating a more engrossing experience. The stakes are laid out through the drastic action taken to avoid the Gauna at the expense of many lives, the history detailing humanity’s dwindling numbers and ships, and also on a personal level as Tanikaze and Hoshijiro’s relationship grows very strong. The immortal council hasn’t been particularly useful so for now they’re more caricatures than anything else, along with Kunato. I’ve really been enjoying the animation because the action sequences are well-detailed and the intensity is high when pilots are attacking or evading the Gauna. And with the conclusion of episode 6 it’s clear that there’s no turning back, and I’m ready to grab a Kabizashi and blast forward.