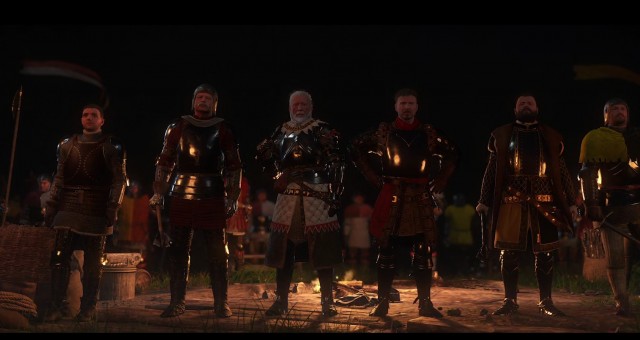 Kingdom Come: Deliverance is a first-person action role-playing game developed by Warhorse Studios. It’s set during medieval times in Bohemia when it was under the rule of the Holy Roman Empire. It opens up in the small village of Skalitz where life is simple. You play the role of Henry, the son of the local blacksmith. You’re not exceptional at anything in particular but there’s been no need. When you’re not running errands for your parents you’re either goofing off with your friends or spending time with your girlfriend. It’s an easy life.The biggest event in your life is when your father makes a sword for the local noble.

That all changes when the politics of the Kingdom of Bohemia reach Skalitz’s doorstep in the form of an invading army. The next events are swift and brutal. Almost the entire town is massacred including your girlfriend. And you’re powerless as you watch your parents be slaughtered in front of you. You barely escape with your own life when you’re sent as a messenger to the next town. Your quest to avenge your parents and uncover the mystery of the invading army begins here.

There are so many games that promise a sandbox experience. Too often that experience isn’t worth delving into because only the main quests and a few side quests are truly entertaining. Kingdom Come: Deliverance succeeds in creating a memorable sandbox experience for numerous reasons. Aside from a few bugs (which at times made the game memorable for the wrong reasons) you can truly become fully engrossed in the many activities the game has to offer. The various activities are complete with their own minigames, and the results in your world feel realistic. The “tutorial” is indicative of what makes this game so much fun. There is no hand holding and you have relatively simple tasks to complete but you can complete them (or not complete them) any way you want. Some times you can get sidetracked with disastrous results and the game just continues.

Since you start off as just a commoner, the son of a blacksmith, you have no skills. Yes, you have an initial boost to certain stats based on the answers you give to questions you’re asked, but you’re on your own after that. The character progression system is deep and designed to favor how you play. It’s not just a matter of leveling up and then assigning points to a particular skill. If you want to become better with a bow, the only way to do that is to use it in the game. This game is unique that when you first begin to shoot with a bow and arrow that you have to learn how to shoot while being unable to hold it still. It’s fun improving Henry’s abilities and skills because its incorporated into the story line and the activities are enjoyable.

There are 3 main sections in the character progression system: Stats, Combat and Skills. Stats consists of attributes that affect various traits and you can improve during a wide range of activities as you progress in the game. Combat is directly connected to your to your fighting style. Aside from Warfare, the other attributes only improve when you use that particular style. So if you didn’t use a mace throughout the game there’s no way to suddenly become a master. Skills are based on how much you participate in those activities. They’re worth delving into because the minigames are a blast. And you’ll have to eat and sleep or your stats will be impacted negatively.

The Choice is Yours….

Once you set out in the open world, it’s not long until you can participate in any of the activities associated with Skills. You’ll have to learn how to lockpick and pickpocket but everything else is straightforward. I ventured from the main quests early because these activities were so entertaining. You can partake in these activities on a cursory level or you can immerse your character in one of these ecosystems. So yes, you can become a full-time pickpocket and/or lockpicker. The challenging minigames can become addictive, and the more you do it, the more your skill increases. Your actions impact your reputation in the towns. So you could very easily spend days in jail. The game goes so far as to make it difficult to resell stolen goods to vendors because they might recognize them as stolen.

These choices don’t only determine what you’ll spend free time doing but how you’re able to solve quests. You can choose to become a scholar, for example, if you don’t want to improve your fighting skills. This will change your interactions with other characters in the game. I loved the persuasion system, which shows the potential success of different approaches. Your success in a conversation is dependent on 3 attributes: Speech, Charisma or Strength. If your attribute for the conversation option you select is higher than your choice is successful. So if you threaten a character that has a higher Strength attribute than you, your choice will fail. And a fight could ensue. And if your Speech is low because you’ve been a brawler the entire game, you won’t be able to outsmart a noble. It’s pretty dope that even the conversations are directly influenced by how you play.

The combat system is exhilarating and brutal. This isn’t a simple hack-and-slash game, and you’ll have to strategize while in combat. Regardless of your weapon of choice, you control your angle of attack. You can swing from various angles and you even have the capability of faking an attack from different angles. A lack of patience or the inability to create an opening can be met with disastrous results. So a fight with a highly skilled knight could take some time. You’ll have to parry, dodge, counter and make use of your combos at the right time. There are plenty of places to train too. I loved this combat system because it fit the game perfectly. Your layers of armor, your inventory, all factor into your success in battle. You’ll feel like a true knight in battle especially when there’s a war sequence and you’re involved.

Since you’ll have to work your way through the main quest at some point, you will have to learn at least the basics of what the game has to offer. The main storyline starts off as a quest for you to avenge your parents and retrieve the sword your father made but it becomes so much more than that. You’ll unravel the mystery of who attacked not just your town by other towns, and why this is occurring. I felt completely invested in the story and the game does a great job in making you care about everything going on. Whether you’re addressing a town ravaged by a plague or resolving issues between residents and refugees, it’s all pretty riveting. Your choices impact mission outcomes but you’ll still be involved in the politics of nobles.

Kingdom Come: Deliverance is easily at its best when it gives you free rein to do as you please and define your character. This is when you can enjoy all the different design choices and appreciate even the smallest touches. I was genuinely hooked. However, too many times  I couldn’t complete a quest the way I wanted because of the number of quest breaking bugs. I commend the designers for the number of creative ways to complete quests but it’s only fun if it works. Fortunately, a number of bugs were fixed during my playthrough. But there was a late game quest that completely threw out what made the game so much fun up to that point. This quest required you to infiltrate a monastery.

I was not only perplexed by this late game choice but frustrated. Even though there was a quick way to complete it, to do it the “right” way you had to spend days there performing routine tasks. Kingdom Come does a good job making you feel like you’re truly immersed in your task. But for this quest it was terrible because you really feel like a monk isolated from the world and there’s nothing fun about that. This felt like an example of the designers forcing that as the player’s main experience because they were too enamored with the little details the game had to offer. Meanwhile an entire interesting world was ignored. Thankfully that didn’t last long and the overall experience was still fun.

Kingdom Come: Deliverance is a memorable experience with its addictive open-world experience but falls just short of greatness due to technical issues. It’s an interesting challenge to take Henry from his starting role as a commoner and make your way through the world. The dialog, combat and character progression systems are refreshing and add wonderfully to the overall experience of defining your character. This game is an absolute blast and the only thing that takes away from it is its lack of polish. Hopefully a majority of the bugs will be fixed, especially the quest-breaking ones. But if there’s ever another game in this series I’m definitely on board.