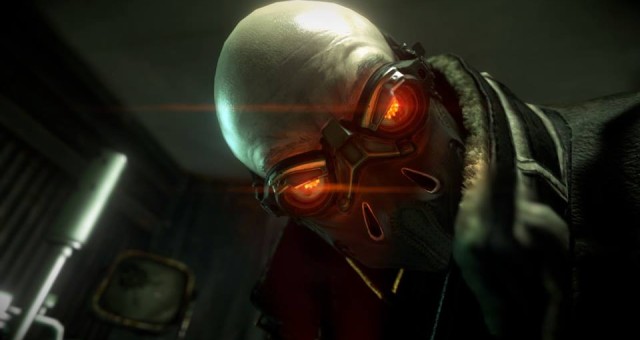 Killzone Shadow Fall is a first-person shooter developed by Guerrilla Games and is a Playstation 4 exclusive. It’s set in 2367 on the planet Vekta and takes place 30 years after the events in Killzone 3 that resulted in the destruction of the planet Helghan. Following those events the ISA made the decision to move the Helghast refugees to Vekta and give them half the planet to live on while moving the current occupants by force and constructing a wall between the two populations. But naturally this doesn’t go well with those who already live there, and the Helghast only make it worse by inexplicably denying safe passage out for many of the occupants. One such family, Michael Kellan and his 5-year-old son, Lucas, attempt to allude detection and make it safely to the wall. It’s not easy but they receive help from a Shadow Marshall named Sinclair to get close to the wall but tragically Michael is killed by the Helghast in front of Lucas before he could make it over. This serves as motivation for Lucas over the decades as he rises through the ranks of the Shadow Marshalls with Sinclair watching over him as promised. However the tensions between the Helghast and the Vektans hasn’t died down over the decades and has only escalated through covert activities to the point where the two sides are on the verge of war. You play the role of Lucas, a Shadow Marshall who has the responsibility of performing covert missions to cripple the Helghast and your first mission requires you to get captured by the Helghast in order to get inside the Wall and conduct an investigation.  But with this conflict raging for decades with no end in sight, can all-out war be prevented or is it inevitable?

I’m completely new to the Killzone series so the initial story didn’t resonate with me because I didn’t know what occurred at the end of Killzone 3, and I was not only slightly perplexed by the Helghast being given half the planet but by the fact that there was no oversight so those who were already on that side of the planet were left at the mercy of the Helghast. To me this would only create more hostility and anger, and defeat the purpose of doing this. But I’ve played many games that were sequels and was familiar with the story where as others might not be and so I decided to just focus on the gameplay until it started to resonate with me. And so the game play actually starts with you as Lucas as a 5-year-old and you have to try to elude detection by the Helghast forces. This is just to give you a feel of the basic movement controls and some of the stealth aspects of the game, which consists of staying out of view with no additional mechanic. This also gives an interactive experience with the Helghast arriving and the death of Lucas’s father, especially considering it gives just a quick summary about Lucas’s growth over decades so there’s no interaction with Lucas’s growth. And so the first real mission is either escaping from captivity or sneaking back into captivity and I’m being somewhat facetious but it’s just the beginning of the character and the two sides going back and forth where it doesn’t matter who started and who retaliated because it all becomes blurred.

And it was a curious choice to me to have a lengthy introduction to melee combat and stealth while escaping as an adult, and then be thrown into combat that doesn’t resemble what was just demonstrated through the first areas. You receive an OWL, a personal drone that you can control to perform 5 different functions, Hack, Attack, Stun, Defend, and Zipline. You choose the mode your OWL is in by swiping the touchpad on the controller in the corresponding direction. It’s a great touch and is actually useful as opposed to just showing the capabilities of the touchscreen on the Dualshock. Initially you have to use it to attack since you have no gun but I do have to mention that I encountered a glitch at this part and my OWL wouldn’t actually shoot bullets and so I had to restart the game after failing a few times. (I also encountered another error at end of this level where my OWL couldn’t hack the final console and this was resolved by restarting the entire chapter.)

And so I admit that the combination of glitches and the sudden change in gameplay had me feeling frustrated early on but as a gamer I wanted to get through it and wanted to see if I would start enjoying the game more in later chapters. The problem for a first time Killzone player was the appearance that stealth would be a factor only to be put on a map where you’re surrounded from all angles and if you focus on stealth you won’t make it. And there were two issues with enemies with one being endless spawning and the other is they were omniscient. Yes they do endlessly spawn if you don’t hack the alarm system in the area first or during battle, and if one enemy becomes alerted they all do instantaneously and know your exact location. So there isn’t anything innovative or complex about the enemy AI. And aside from the OWL you have the tactical ECHO system, which sends out a sound wave that reveals the enemies in the vicinity and allows you to see them even through walls. This is definitely useful but it was a curious choice to make it possible to overload it and alert enemies. You also have a sweet weapon that switches between a submachine gun and a rail/sniper gun that discharges enough energy for a one-hit kill.

So despite not being a fan of the first map and the progress killing glitches, Killzone Shadow Fall does start to gain some traction in later chapters. The free space areas are very strange as there’s no propulsion or any feeling when moving. And the fact you have to keep pushing a button just to see the location of the objective is an unnecessary step that can be cumbersome when you’re being attacked by waves of enemies. And there are many situations where you’ll be dealing with waves of enemies ad nauseam. It picks up when you start working with another character, Echo, and you’re faced with unique situations where she guides you or acts as your support sniping enemies you point out. And the enemies improve as you’re required to use more of your OWL’s capabilities besides attack and you can actually create a plan of attack and not just go in guns blazing. This was the best part of the game and it also helped that the story took on a life of its own where you have to perform missions in order to prevent an all-out war, although it still wasn’t fully engrossing and the characters came off more as stubbornly incompetent than as determined to protect their own outside of Lucas and Echo. And the conclusion itself was slightly entertaining although there was more satisfaction from actually finishing the game than feeling attached to the conclusion.

The campaign was passable and was neither amazing nor truly memorable. However some of the game play mechanics had potential and so I wanted to see how this would play out in multiplayer mode. And Killzone Shadow Fall does away with XP completely in an interesting take on multiplayer. You’re still rewarded for playing but in the form of unlocking items and specializations. There are 3 classes: Scout, Assault, and Support and each one has its own set of weapons, abilities and other items to unlock. So instead of unlocking items and attachments you don’t use just by leveling up, you’ll unlock items for the specific class you prefer to use. They aren’t just different by name but different in terms of how to effectively use them. As the name would suggest, the scout has special abilities that allows that class to locate enemies on the map using the echo system, and can be cloaked, for example. All of these abilities can be leveled up based on your use of the scout class. And Assault and Support have similar abilities suitable for those classes including the way OWLs are used. It does add a unique feel to the different classes and the balancing between the 3 is very good. One of the things that’s really impressive about the multiplayer is how smooth it runs giving precise control over aiming and the weapons feel good. However the running can feel sluggish at times in comparison to other games and that’s not due to lag. And even though the maps are unique from each other with a lot of details the multiplayer modes are divided into two, Team Deathmatch and Warzone. Team Deathmatch is straightforward but the Warzone mode changes objectives so during one match you could be playing up to 8 different game modes. So one match could be 5 minutes of Capture & Connect and then switches to Beacon Theft.

This is entertaining as it keeps the objectives fresh and requires a changing of tactics during one match. Warzones can be customized to include just the modes you want and the time you want them to last. However there are already Warzones that have these customizations available so there are plenty to sort through in order to find the one you want without having to create your own. Now the abilities do work better in multiplayer and they work well, but the multiplayer mode didn’t grab me and make me feel that I should play it over other multiplayer games. Yes it was decent and I can definitely understand the appeal as I had fun playing it but nothing about it felt unique or new including the abilities.

Killzone Shadow Fall is a passable game and any potential it had to be great is squandered due to an unengaging campaign mode and just a decent multiplayer mode. I never got a true sense of my character in the campaign mode either in terms of what his capabilities were supposed to ultimately be nor his true motivation. Outside of the character Echo, the others felt like caricatures and I never felt engrossed in the story or understood who started what, and I don’t believe all of that was due to just being introduced to the Killzone series. The multiplayer mode had interesting maps and the Warzone mode with its changing objectives felt fresh. And the precision in multiplayer was also a huge bonus. But just like the campaign mode it wasn’t truly engrossing or felt unique and as a result it remains in the shadow of other first person shooters.