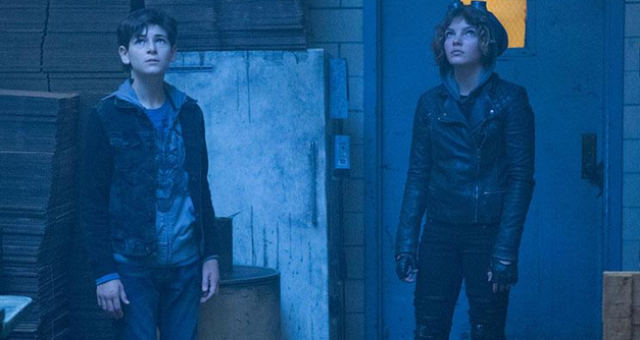 Gotham: Lovecraft is the 10th episode of the season and has Bruce and Selina on the run for their lives due to a hit being placed on Selina. It opens up in front of Wayne Manor with a woman coming across one of the grounds crew. She asks him if this is Wayne Manor and he confirms to her that it is. This is the last thing he does as she kills him and has one of the others with her smear the blood on her face. Selina and Bruce are oblivious to what is occurring outside because they’re in their own world with Selina currently showing Bruce how to balance on the railings in his house. One thing that’s clear is they’ve been getting closer since she’s been staying there, and she even inquires about all the files he’s acquired about his parents murder. He explains to her why he has all of that, and despite mocking the notion she still wants to kiss him. They don’t have a ton of time because the woman taking out the grounds crew knocks on the front door pretending to have just been in an accident and the blood on her forehead is hers. This charade falls apart quickly once Selina and Bruce make eye contact with her, and this woman is revealed as a trained assassin with her target being Selina. What no one expected was Alfred fighting back, and he surprises a few of the hitmen, giving enough time for Bruce and Selina to escape and make a run for it. In order to guarantee their escape he kills a couple of the hitmen but the rest get away in pursuit of the youth. Alfred has no choice but to contact Gordon, and Bullock learns about Harvey Dent using Selina as leverage in the Wayne murder, and it’s clear that she was the intended target. But how did anyone know she was there let alone she was the eyewitness to the murder? And with Bruce and Selina wandering around Gotham on their own, is it just a matter of time before they’re caught by these assassins?

I have been intrigued about the reopening of the Waynes’ murder case despite the questionable decision to keep Selina at Wayne Manor. It opened the door to Selina and Bruce interacting and some character development for both of them. So I was looking forward to this episode because I wanted to see everything come to a head, and also see Alfred in action finally. Considering the changes made to the character’s backstory I wanted to see how it would work in this show. And I’m glad to say that it didn’t disappoint, and Alfred came off as a true G. And better than that, this was an overall solid episode that avoided the pitfalls of the usual case of the week and revealed more about the inner workings of Gotham. When Bruce and Selina flee the manor they make their way through Gotham and initially there’s a disagreement about calling Alfred from a pay phone. This leads to entertaining banter between the two, and if you’ve ever enjoyed the relationship the two have had as adults in the comic books then you might find this entertaining. And I’ve been enjoying the angle the show has taken with Selina giving Bruce her understanding of Gotham, which supplements the desire he already has to know it and be stronger. And it does make sense considering Bruce wouldn’t, and couldn’t, change overnight from one of the richest kids in Gotham with a loving home to knowing everything about the worst parts of Gotham.

Their journey through Gotham would led to Alfred searching for them with the help of Gordon and Bullock, but not before he would give them a piece of his mind about this entire situation. And he would be adept at handling the different encounters, and whether it was getting physical with a thug or charming Fish, it was highly enjoyable to see Alfred in action. Like Bruce would say during this episode, that’s not his butler but family. And it was easy to see the “family” resemblance at certain points this episode. And it was also good to see a different side of Fish making her more intriguing based on her role in this. She would still have her edge in ramping up her plot against Falcone, and it was enough to make him sweat and worry about his operations. And this plot has become more interesting with its dynamics based on Cobblepot being caught up in it and Falcone’s response to it. He wouldn’t be the only one sweating this episode as the heat would come back on Harvey Dent for his idea to apply pressure to Lovecraft, and the Pandora’s Box he opened up as a result. Considering he was recommended by the special unit, I’m not surprised that one of his operations would not only be a bad idea but executed so poorly on his part. But he still comes off as a character with a lot of potential overall. And the revelations that would take place this episode about an organization watching Gordon and everything else in Gotham had me excited as to what this could be. And I would love to know more about this.

There would be plenty of action this episode, of course, but thankfully it wouldn’t involve Bruce beating up any trained assassins. He would have his adrenaline filled moments giving a taste of things to come at least in terms of his mentality, and that’s the type of character development that works better than the heavy-handed tactics at times. I did enjoy Ivy’s appearance this episode and I even laughed out loud at Selina’s reactions regarding her. So just like that seed was planted for later, so were other interesting developments including the end to this episode. So yes, I’m legitimately excited for the next episode of Gotham.

Gotham: Lovecraft is an enjoyable episode that handles the character development in one of the best ways all season while introducing a wide-ranging conspiracy in Gotham’s shadows. I thoroughly enjoyed Alfred’s portrayal this episode as well as the interactions between Bruce and Selina, and the gradual growth. The assassin’s were a welcome addition and I’m anxious to see more about them and who they were working for at some point. But this episode was definitely a game changer, and I’m looking forward to see how things unfold in the next episode.