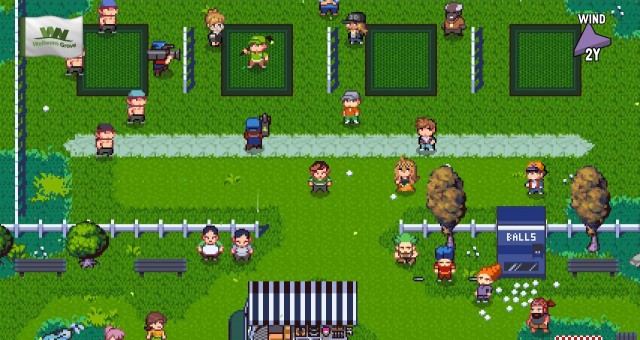 Golf Story is a role-playing sports game available exclusively on the Nintendo Switch. It follows the story of a golfer who decides one day that he finally wants to pursue his dream of becoming a professional golfer. All he’s armed with are his memories of time spent with his father golfing and his unshakable belief in himself. One of his strongest memories is from his childhood when his father states he believes the character could one day win the Wellworn Grove Open. So naturally, entering and winning the Wellworn Grove Open is his first priority. But he’ll have to battle his way through grueling challenges from other golfers, shady owners, and skeptical coaches. Will he finally achieve this dream or is it too late for him?

When I first copped Golf Story, I wasn’t expecting a serious golf simulation. It looked like it could be fun and I was interested in seeing the RPG elements in a golf game. And even though I enjoy golf, you don’t need to in order to appreciate this game. However, I was surprised at how deep the actual game play was in the story mode. You get your first taste of gameplay in the usual fashion: tutorial as a flashback. You’re then thrown into the present-day to prove your worth as a golfer. You can technically tee up anywhere you want by hitting ‘Y’, and hit your unlimited supply of golf balls in any direction you want. However, you can’t play the actual course until you complete a number of side missions first.

You’ll have to make your way around the entire map completing various quests in the order you choose. At first, you’re restricted only to the Wellworn Grove course. In your initial quest to prove yourself to the instructor at the Wellworn Grove, you have to defeat his current students in a series of challenges. Each challenge teaches you a new game play mechanic. The simple swing is to press “A” to let your power meter fill up and “A” again to stop it. And you press “A” on the way back to set your accuracy. But that’s just the basics. You’ll learn more about the mechanics from the different characters spread throughout the story.

You have an extraordinary amount of control over your shot. There’s precision mode, which allows you to measure the power of your shot more effectively. You have options ranging from approach mode, which lets you make a run on the green, to choosing the exact location you want to hit on the ball to modify your shot. And it legitimately feels fun to select these options. Makes it feel even better when you nail the perfect swing.

Even the course hazards in Golf Story aren’t just the standard hazards. You’ll have to deal with a variety of wildlife, some aiding your shot, some hurting your shot. There’s a strange satisfaction when you deliberately aim your shot at the water, knowing if you hit it in the right location a turtle will appear to help you. Every course has its own unique hazards so none of it feels redundant. So it’s unfortunate that with such fun courses there’s no way to zoom out to plan your shot to the tee better.

The RPG elements are satisfying, even if limited at times in developing the character’s stats. You earn money and XP from completing various quests or random tasks in the open world. When you reach a new level, you have points to use to upgrade one of five stats: Power, Purity, Strike, Ability and Spin. These stats are linked to each other so modifying one affects the other. It’s an interesting system because you can’t just load all of your points into power without any drawbacks. But considering how even a slight increase in power has an immediate impact on the other stats, at times, it felt like more of a balancing act than customization.

You will collect an impressive array of clubs throughout the story. And you can switch between clubs at any time while in the open world. Some clubs are required to complete specific quests. They’re not just the usual woods, irons, etc. Way before you use a club called the Lightning Wedge, you know these aren’t the standard set of clubs. So you can change your gear based on your preferences. And they actually do impact your shot in different ways.  You don’t have to purchase all the clubs, and instead use your money for other items.

The story is actually entertaining and has enough variation to keep it interesting throughout the HOURS of gameplay. At first, you’re dealing with a cynical coach you have to prove yourself to, and then the story takes off from there. A corrupt golf course owner becomes the least of your concerns for a while because you’ll have to deal with angry wildlife, a zombie uprising and even more bizarre situations. It becomes so entertaining that I actually forgot the main quest was to become a pro.

The characters in the story are just as colorful as the scenarios the player faces. And the interactions between characters were highly enjoyable. Just like the gameplay wasn’t meant to be a serious golf simulation, the story never takes itself too seriously either. It has a few touching moments throughout but they’re all interesting caricatures for the most part. So it’s easy to root for the main character. His belief in his abilities, and proving himself over and over. Well, at least the majority of the time it seems the game wants you to root for him.

The story’s length was surprising to me but I didn’t have an issue with it. However, the length also made the character’s harsh treatment more noticeable. Even though the character grew due to the RPG elements, when other characters are repeating the same lines about him not amounting to anything after 10 hours of gameplay, it’s slightly tiresome. I thought about it more when his wife was introduced in an unusual situation. As a result, I didn’t know whether to root for the character, feel bad for him, or just wonder why the tone shifted so drastically. I ended up feeling bad for him. It was doing too much with that aspect of the story. It took away from feeling progress. Thankfully, the gameplay was still fun so the final feeling of triumph was worth it.

Golf Story provides countless hours of enjoyable with its solid mechanics, variety of courses and challenges, and entertaining characters. The story mode takes you on an exciting journey, and it’s not long before you feel engrossed in the quest to become a pro. The course hazards vary greatly so each course feels unique. And it makes it even better that there are so many ways to complete a course.  So despite the story stifling the feeling of progress at times, Golf Story is ultimately a triumph.