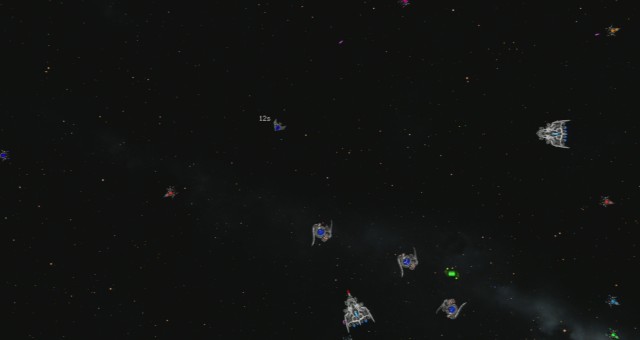 Generic Space Shooter is a space shoot ’em up game developed by LionSword. You take control of one of 14 spaceships and have to battle endless enemy ships with increasing difficultly. They come from all directions with some ships hurtling themselves towards you to destroy your ship while others wait on the edges firing at you from a distance. If you survive long enough you’ll have to contend with bosses and test your mettle against them. But you have at your disposal numerous power-ups to help you survive and even the playing field. And with the various ships you can choose from you’ll be able to take advantage of the strengths of each ship in order to advance. Stay alive as long as possible to see the highest score you can achieve.

I’ve always enjoyed a really good space shmup and have very fond memories of them going back to my childhood. So when I came across Generic Space Shooter I wasn’t expecting much other than…a generic space shooter. Well actually I was hoping it would be solid and provide entertainment on the level of some of those retro shmups. It starts out simple enough and you only have one ship available to you with the rest needing to be unlocked. You move around the screen freely with the left stick and you shoot in any direction you want with the right stick unless you’re moving, in which case you’re only capable of shooting in the direction you’re moving.

The initial enemies just fly across the screen or follow you in order to crash into you and obviously destroy you. They become more difficult the longer you stay alive and the higher the level you reach. Power-ups can appear anywhere on the screen and you have about 5 seconds to get the power-up before it disappears. It’s not gone permanently as it’ll just appear in most cases somewhere else on the screen so it’s best to wait it out sometimes if you’re all the way on the other side of the screen. The power-ups themselves are very interesting and even though the majority change the type of ammo you fire, there are power-ups that increase your speed or give you a shield. All power-ups are temporary though and there’s a countdown timer that appears next to your ship letting you know how much time you have left to use the power-up. It was really cool to see the change from standard bullets to something like “follow bullets,” which change direction based on where you look after firing them, for example. You also have the ability to slow down time, which will allow you to escape very close calls or race across the map to get a power-up faster. Even though this ability isn’t a power-up you only have a total of about 30 seconds to use this until all your 3 lives are gone. And the controls are solid and smooth for the most part. And the aiming is consistent with the enemy movements and this was comforting because in a space shooter where enemies are coming from 360 degrees it would ruin the experience if your shots never lined up with the angles the enemies approach from.

So I was enjoying this and starting to get the hang of it and then something happened. I was flying around avoiding enemies and laying down fire and then I could no longer shoot. I didn’t know what happened at first and it’s hard to avoid all the enemies without destroying at least some of them, and then I realized I ran out of ammo. Now this isn’t the first shooter that let’s you run out of standard ammo but taking all things into consideration I don’t feel it was the best choice to limit the standard ammo. When part of the game play is facing endless waves of enemy ships and the screen is relatively large in comparison to the ship,  accuracy takes a big hit especially when you can only aim in any direction when you’re not moving. And when shots cancel each other out, taking numerous shots to get just one ship is unavoidable. So that means your entire strategy is based around rushing from one power-up to the next especially when you get to the higher levels and there are enemies all around. The good thing is that when you do collect an ammo power-up you can fire as often as you want but you only have 5 seconds depending on the ship you’ve unlocked. And you can only truly out race other ships when you slow down time and you can run out of that as well. And since the edges of the screens are barriers you can’t pass that also limits your ability to evade ships and reach power-ups. Once you get the hang of the game and unlock other ships you’ll be able to get more ammo from collecting ammo refills or power-ups but running out of ammo can still be a problem later on.

The enemies vary to a degree and the bosses present a challenge if you haven’t tried to clear the map of ships sitting on the exterior taking shots at you. Bosses can also spawn many of the ships you face so that’s an additional challenge to battling a boss. Overall the boss battles improve the game play because it’s a new enemy to face. I admit it is very enjoyable to get a bullet trail power-up, which instead of shooting bullets draws lines ships can’t pass through, and spin in a circle to create an impenetrable sphere and then watch the shots go in every direction destroying almost all the enemies on the screen once the power-up expires. But depending on the situation sometimes your best bet is to get a shield power-up or die and then use those 5 seconds you get with  a shield to run into and destroy as many enemies as possible. You have to use your lives wisely and the power-ups as well or else you won’t last long. I must stress that this is a simple shooter so there isn’t much to expect in terms of extras. There are no additional maps or screens to explore so replayability is dependent on your desire to keep achieving a high score or just enjoy a good old-fashioned shmup.

Generic Space Shooter is a simple yet overall enjoyable space shoot ’em up. The controls are solid and very straight forward and the 9 power-ups make the game play interesting with their creative changes to your ammo. The temporary nature of everything in this game from power-ups to special ability to even the standard ammo takes away from the game play more than it enhances it. Unlocking new ships by completing different objectives improves that slightly. However the name of the game makes clear what it’s striving to be and for the most part it does that very well. If you’re a huge fan of retro shmups then I recommend giving Generic Space Shooter a try.