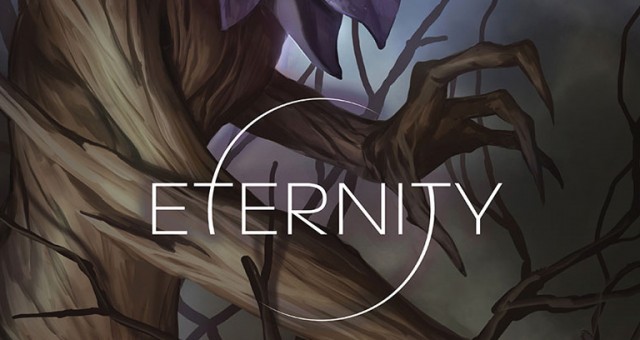 Eternity #3 continues with Abrams and Myshka in the middle of a cosmic battle between the Past and Future-Lighters. Watching the chaos unfold, Abrams deems it all as ridiculous. He wonders, what is the purpose of this show of violence and how many times has it played out in the universes? It’s not that he’s pondering this because he’s powerless. He wonders what good would anger do when it would distract from their only goal: to find their son.

Myshka is taking a different approach to the situation. She’s fully engaged in the battle. And she becomes increasingly frustrated after every enemy she defeats. Abrams tries to convince her that’s not the right way, but before he can finish, he’s knocked out. The Keeper tells Myshka that the two of them are dangerous, and he has to prevent them from being involved. What is really going on with Abrams and Myshka’s son? And is there more occurring than meets the eye? 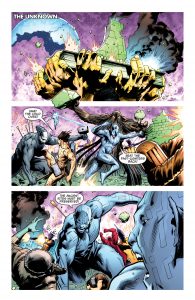 Considering the fact this series deals with two individuals whose powers are capable of shaping reality, this issue did a fantastic job highlighting Divinity’s appeal. I felt last issue was methodical in ways. Abrams pondering the meaning of all the action around him hinted at a more sublime explanation. Was it all just a distraction from what was really unfolding in the Unknown? Or was it just the beautiful writing sparking my imagination in wonderful ways and looking deeper into the story? This is why Divinity has been so appealing to me.

The issue would flashback to when Abrams was younger and still living in Moscow. It covered everything from his life during that period from how he would deliver books for his adoptive parents to his interactions in the cold streets. This tale was gripping and gave a lot of insight into Abrams’s mentality. And the story about a newly built robot traveling the world was the cherry on top. At first glance, this flashback felt like a digression. But just like the beginning of this issue, the beautiful writing made me want to think deeper about every panel.

The final part of this issue would continue with Abram and Myshka trapped in a prison with no apparent restraints. This was an interesting situation considering their powers, and the understanding of their powers. The Keeper told them that their child was the Observer and they needed to stay out the way. They were also given answers about recent events, and those answers were satisfying but only part of the puzzle. I won’t give anything away but I’m curious about how things will unfold for Abrams and Myshka now that some things have been made clear to them.

Eternity #3 successfully takes everything I love about the Divinity series and makes this series more intriguing on every level. Abram’s perception of the events around him made them that more entertaining. And Abram’s memories hopefully serve as a way to further understand the current events. Either way I’m looking forward to delving deeper into the world of Divinity next issue.