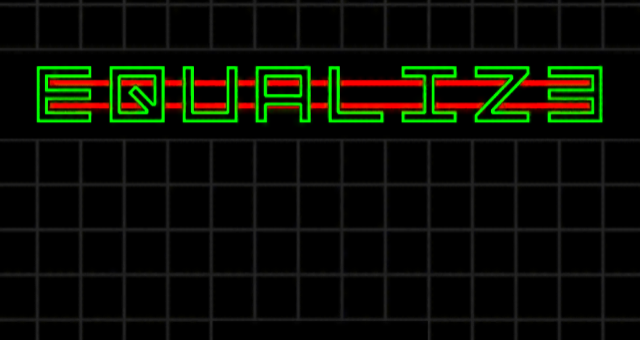 Equalize Math is a numbers matching puzzle game developed by Jordan Goulding. It features over nine levels of number-crunching puzzles that will not only test your quick thinking but your dexterity as well, as the speed increases with every level. You can stack the numbers any way you want as long as the equation equals the target goal when the row is complete. Mess up the equation and lose points. It can be a daunting challenge to juggle multiple equations in your head at once but it’s also very rewarding as successfully completing rows builds streaks and multiplies your overall score. And not to mention that it can be exhilarating to complete these rows successfully and keep achieving a higher score and testing your wits. Can you continue through all the levels and master Equalize Math or will you let your friends surpass your highest score?

When I opened Equalize Math for the first time I wasn’t entirely sure what to expect. At the time, I was looking for more challenging puzzle games to sink my teeth into, so I was interested in Equalize Math initially just for that reason alone. If you see the word “math” and think it might not be a fun game because of that or that it might be too challenging at first and not fun to get into, I can state that the tutorial is very thorough and makes things simple. And once you go through the tutorial you’ll see that it’s not much different from other falling block puzzle games, such as one of my all-time favorites, Tetris, and instead of different blocks and colors there are different numbers. 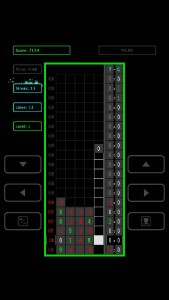 Each falling block contains a number from -9 to 9. However you can switch between a positive and negative number while it’s falling, but you can’t change the randomly generated number. You can move the number from side to side using the left and right arrows on either side of the falling blocks area. The objective is to get the numbers on the five blocks you place in a row to total the set number in the last column, which is the target goal. You don’t have to keep the current total of the row in your head because there’s a column right next to the target goal column that shows you the current total of each row. So for example, if the target goal is zero, which is the case for the lower levels, the five blocks you place in that row have to total zero. So you can place five zeros in a row and complete the row successfully, or you’ll have to use a combination of positive and negative numbers to equal zero. Of course you can stack blocks on top of each other if the number(s) you need still hasn’t appeared yet. One of the cool (and convenient) things is you can change the destination row of the falling block. So let’s say you have a row that needs a 4 to equal the target goal and complete the row, you can change the destination row of the falling block by using the up and down arrows on either side of the area so the block stops at that row. So you can clear rows in any order you want. However blocks can’t pass through each other so you can’t choose a destination row for a block directly below one that’s already placed, although you can try to navigate around it. The initial levels are relatively slow, and there’s one additional button that you can use to drop a block immediately once you have it lined up where you need. 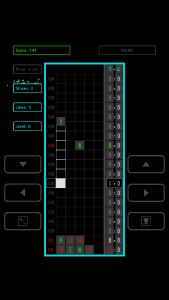 Scoring is very straightforward as well. You’re awarded points for every row you successfully complete and the game keeps track of how many rows you’ve completed in a row (no pun intended at all) because you receive a streak bonus that increases as your streak increases. So you want to be careful because if you fail in achieving the target goal of a row, not only do you lose some points but your streak is reset as well. For every 10 rows you complete (regardless of your streak) you go to the next level, which means the speed of the falling blocks increase and when you get close to level 3 the target goal is no longer just zero. This can definitely be challenging when you have to juggle multiple equations and move the blocks fast enough to successfully complete a row.

I was enjoying this game a lot and the actual game play is simpler than it sounds, so it truly felt like an enjoyable falling blocks puzzle game. I even appreciated the earlier levels going slowly because it’s not so much about being able to use addition and subtraction but about becoming accustomed to the controls well enough to be able to react without delay, especially when you get above level 9. So the controls are very solid and super responsive. I have big hands and I would have liked to see bigger buttons vertically or at least an option for that. It wasn’t a big drawback because it doesn’t take a ton of time to adjust but it would have felt slightly better, especially when I was trying to focus on the thrill of being able to juggle multiple equations and complete the rows. (Yes I called it a thrill).  I also wear glasses the majority of the time, even though I see text better up close without them, and I would have liked to see a bigger font overall, either by making the buttons on each side horizontally smaller (but vertically bigger) or just in general, including the font size on the menus.

And I’m not sure if this was by design, or if it just occurs, but I use my iPhone for many things like everyone else, and I noticed that if I switched between apps and left it that way for 30 minutes or so, it would restart the game when I switched back. This was more limiting than the button or font sizes because sometimes I would be on a roll and would have to do something else, and to come back and have to start over was an issue. Some days I would only be able to play in spurts as opposed to having time set aside to do it. Now you can start on any level through the menu but you start with zero points if you do and I would sometimes like to see how high I could score from the first level. The game play was definitely fun to me so these issues would only distract from that depending on the day.

Equalize Math is a unique yet entertaining falling block puzzle game. It actually makes juggling multiple, yet simple, equations very fun and has solid controls. A few minor issues can be overcome once you become more familiar with it but they don’t detract from the overall premise or game play. If you “hate” math, I don’t want to claim that Equalize Math will suddenly make you love it. However if you’re looking to challenge yourself in a fun way then you definitely have to give Equalize Math a try because it does for numbers as well as simple addition and subtraction, what other puzzle games have done for shapes and colors, and that’s using them to create interesting game play and making you want to come back and attain an even higher score next time. I highly recommend Equalize Math if you enjoy falling block puzzle games. And if you love math then definitely give it a try.