Daredevil season 2 continues with Matt Murdock, Foggy Nelson and Karen Page coming off their biggest victory in putting the Kingpin behind bars. As a result, things are going good for Nelson and Murdock, they are receiving new clients albeit most of them aren’t high paying clients. Hell’s Kitchen’s gritty, crime prone nature is not gone with Kingpins absence which created a power vacuum that emboldened many gangs to attempt to fill it. However, there’s a new vigilante in town known as the Punisher, and unlike Daredevil, he doesn’t hesitate to kill and believes a more permanent solution is needed to rid Hell’s Kitchen of criminals. It’s inevitable that the two will cross paths, and Hell’s Kitchen could explode as a result. As a bonus Elektra, an ex from Murdock’s life, comes into town warning him of a secret organization with terrible plans for the city and needs his help in uncovering them. How can Daredevil protect Hell’s Kitchen from multiple threats at night while trying to keep his law firm afloat during the day? Or is it all bound to fall apart?

Daredevil season 1 was damn near flawless for me except for a little lull midseason. It wasn’t just because it was new and shiny (or rather gritty) because even now it holds up very well. It was the unbelievably intense action that kept my heart racing, the deep story that made me feel engrossed, and the great character development that kept me invested. The season nailed the perfect gritty vibe due to the mature way it tackled its issues and not just the color palette on the screen. Season 2 is better than season 1 in some respects but struggles at times due to its hesitancy to deeply explore the profound questions it raises and squanders some of the wonderful potential in the situations created. But is season 2 still a blast with exciting developments and cheer worthy moments? Absolutely! 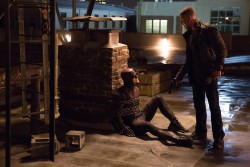 This season starts off really good with introducing the Punisher equating him to a highly trained army since that’s who everyone initially believes is responsible for these brutal killings. After one such massacre of a gang, one member survives and manages to contact Murdock and Nelson because he wants them to help protect him. This creates an interesting game of cat and mouse where the Punisher is able to track down this gang member at the hospital while he’s with Karen in a terrifying hospital scene. This is where Daredevil and the Punisher first cross paths, and the end result is the gang member survives and Daredevil ultimately needs a new helmet (and thankfully a new design). Amazingly, this is only the beginning. Murdock and Nelson choosing to represent this gangster puts them in the crosshairs of not only the Punisher but a ruthless District Attorney, who has her own secrets.

If there were a question of whether or not Jon Bernthal could do the Punisher justice that question was answered early on with a resounding YES. As the season goes on he only gets better due to the strong writing nailing all the complexities of Frank Castle. I think the decision to not use flashbacks in scenes where his family is murdered was ultimately the right one because of the strong acting, and it also leaves the door open to that at some point in the future. He was indeed fueled by revenge and a twisted sense of justice but it was clear even early on that there was a conspiracy surrounding what happened to him and his family. It was engrossing trying to figure out what it could’ve been, who was involved and how will it all play out. Of course there was the question of whether or not he was just a psycho murderer or a necessary hero willing to do what needed to be done to clean up Hell’s Kitchen. I was truly enjoying this story line and the way it was unfolding but when the show had the opportunity to get deeper into this question it punted it. Why? Well, the reason is connected to another story line. The introduction of Elektra.

I was really excited for this season knowing it would have the Punisher and Elektra. I had no concerns whatsoever about the season feeling overcrowded with characters and it honestly never felt that way. Elektra’s introduction was almost as entertaining as the Punisher’s because it introduced an assassin/infiltration story line connected to an overarching plot that made the scope of the season bigger than the Punisher. I believe that Elodie Yung held her own wonderfully as Elektra. Plus this opened the door to flashbacks that could reveal more about Matt Murdock’s character prior to becoming Daredevil. I think there were some scenes executed beautifully and even revealed more about Matt’s insistence on not killing. There was some great character development here. The Punisher vs gangs, Elektra needing help uncovering some sinister plot connected to the Hand? Almost an embarrassment of riches in terms of story lines to explore. Yet the decision was made to focus on relationship drama almost bringing the early momentum to a screeching halt.

I’ve had no qualms in the past expressing my strong dislike of love triangles in TV shows (and movies) due to the cliché factor and the over reliance on them to create fake drama to fill a void due to a lack of creativity. Worse than that, the back and forth between characters make it seem as if there’s a lot occurring when in reality there’s no overall progression. Last but not least, I can’t stand the way love triangles are used to conveniently retcon characters’ previous actions creating an environment of confusion that is used to slip story inconsistencies in. Daredevil teetered on this too long for my taste for a period of time with Matt, Elektra and Karen, and due to that the story line lacked that momentum that propelled the first season early on. And it isn’t until the dust settles that you realize other inconsistencies such as character A saved character B only to claim later that killing character B would save everyone so they must kill character B. And yes that is extremely vague because I won’t give away any spoilers. My point here is it opened the door to a slippery slope that required too much time to recover. 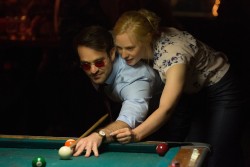 Instead of exploring the question of the Punisher’s role by examining the mentalities of those living in Hell’s Kitchen and the impact on them, this discussion was relegated to a few posters for and against him. Yeah there were some intense scenes between the Punisher and Daredevil addressing this difference but it would’ve been more impactful if this was explored more. This was just one squandered opportunity but it was repeated with the Hand so their mysterious plot didn’t initially carry much weight because the real world impact felt nonexistent. And then it happened: Episode 8. And that’s where story lines came into focus, familiar faces returned, and everything I wanted this season to be finally arrived.

One of the things I enjoyed about season one was the mature character development leading to great story progression. Aside from the lame love triangle scenarios this season had great character development as well. There was a moment when the Punisher was talking to another character about a scheme and I was thinking to myself how this was such an iconic moment due to the fact that this series nailed these two characters perfectly. I had goose bumps on my arms every time these 2 characters interacted because of how engrossed I was in it. Even other characters were given better roles this season including Karen, who fit better as a journalist in a crucial role in the Punisher story line than her role in getting Ben Urich killed. Her scenes were enjoyable and the character really came into her own this season and not all her actions involved Daredevil or Matt Murdock. Even other characters, who I won’t name to avoid spoilers, had more depth added to them this season compared to last. The only character who took a step back this season was Foggy and that was pretty disappointing. There were too many occasions where I kept asking, “where’s Foggy?” because of how he was relegated to a lesser character where it didn’t even seem as if he was a lawyer. Yes, he’s set up to play a major role in a future development that had me excited but even that was due to an initial decision he didn’t even want to make. I hope next season there’s more to his character again than just the one who disapproves of his friend risking his life to protect the city. He’s been a really good character overall.

After episode 8 the story flowed wonderfully so it was easy to become engrossed in it and feel invested in the characters. The Punisher’s story arc was brilliant and satisfying so even though I can’t wait to see more of the Punisher in the future because of the potential in the character I didn’t feel disappointed in the least. The Hand’s story arc was enjoyable because the stakes became clearer and I have my theories about Black Sky and the connection to the Beast. However, the lack of explanations relative to the number of questions the events raised made the story line less compelling than it could’ve been so thankfully the action was intense throughout. There wasn’t one single scene as remarkable as the uncut hallway scene in season but there was more action that kept me glued to my seat and wanting to continue with the next episode.

It was great seeing Daredevil and Elektra team up to take on an army of ninjas, and it was made even better with Daredevil’s combat evolution based on his new gadgets and further understanding of his abilities. As one who loves following movements the fight choreography was excellent. The conclusion was entertaining although the lingering questions about what was truly at stake took slightly away from the overall situation. Since the enemy didn’t feel as developed or larger than life like Kingpin it didn’t feel as impactful as it could have been. But make no mistake, there were plenty of thrills and cheering moments in the final action sequences. The story set up going forward and I’m anxious to see what’s ahead. So bring on season 3.

Daredevil season 2 is another electrifying season that builds wonderfully on the characters, old and new, while improving on the action overall compared to last season. The Punisher is handled brilliantly in an intense and raw manner as expected and gives him depth to make his story arc compelling. Elektra is an exciting character that I hope to see more of in the future, and not just in love triangle situations. The overall story this season is fascinating although the love triangle bogs down the story line for a few episodes but when it all starts coming together it’s an incredible ride. Now I can’t wait for season 3.